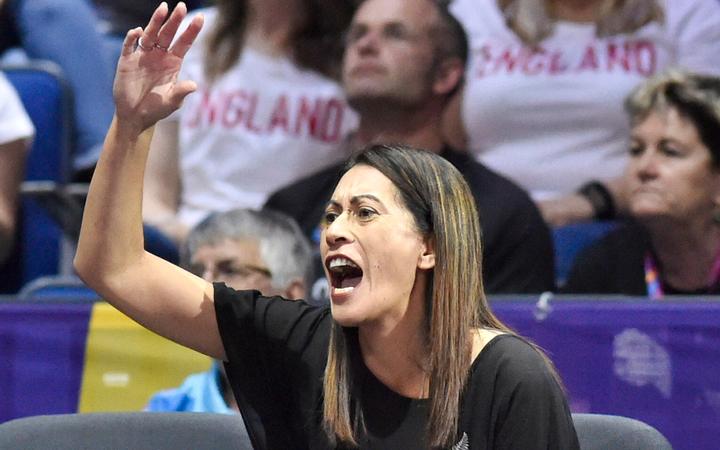 Sports Call – Noeline Taurua knows a lot more needs to be done before she can walk away from the Silver Ferns with some confidence that everything she’s achieved won’t be for nothing.

The coach, who engineered the Silver Ferns remarkable turnaround from Comm Games failures to World Champions in just 11 months, has re-signed until February 2021.

It’s hard to think of another code in New Zealand that relies so heavily on one person but Taurua is going to do what she can to change that.

After recently returning home following three years coaching in Australia, Taurua said the one-year commitment was a good fit for her family.

Her one year extension is also a reflection of the way she wants the Silver Ferns to focus on year by year goals, rather than World Cup cycles.

Taurua said she was excited by the challenges that were ahead.

“There is a strategy out there that looks at the next World Cup in South Africa so what I really wanted to do was focus year by year …ensuring that everything is performance-based.”

Taurua said she couldn’t really commit to anything until she got back on New Zealand soil.

“Happy that we were able to finish 2019 season off with a contract and knowing the Northern tour series in January we’ll be heading to UK and I can definitely start the building process for the year, finishing off at Constellation Cup.”

She said developing players underneath the Silver Ferns was what excited her the most.

“The Silver Ferns are the pinnacle flagship for netball in New Zealand …but the most exciting thing and the thing I’m challenged by is the next levels underneath.

“The possibility of looking at setting up systems right from Under 18s right through to the elite level not only from a player perspective but also from coaches. So that’s probably the thing that’s getting me going and the challenges that’s going to bring will increase my own repertoire.”

While succession planning for the next crop of elite players is a priority, so too is developing coaches capable of replacing her.

“Knowing long term that we need to have more coaches that are willing to put up their hand and capable of being the Silver Ferns coach and also more players coming through who are capable of being a Silver Fern so that’s the other end of my job that I like to tackle.”

Taurua said she would re-evaluate whether she would stay in the job at the end of the extension.

“I need to ensure that Netball New Zealand have guarantees that if I’m not there that we have coaches that have been in the international scene, that have been in the Silver Ferns mix but also that we’re growing them towards being a Silver Ferns coach …even though I’m only committed for one year we do have another plan in place so that others can come through when I’m not there.”

Not all rosy for Australia

No doubt another carrot for Taurua is the tantalising trans-Tasman rivalry with Australia that peaked this year.

October’s Constellation Cup ended 2-all but Australia claimed the series because of superior winning margins.

Taurua has said that the Silver Ferns can’t really claim number one status until they can beat Australia on a regular basis.

Diamonds coach Lisa Alexander has some headaches of her own.

There will be a record high 22 imports in next year’s Super Netball competition, and a large contingent of those are in the shooting end.

Across the competition’s eight Super Netball teams, five of the first choice goal shoot positions are occupied by imports.

There are two other teams where the goal shoot role is shared between an import player and a local.

That leaves only one team in the competition that has an Australian player as the outright first choice goal shoot – namely the Giants and Diamonds’ lynchpin Caitlin Bassett.

The retirement of Caitlin Thwaites from internationals at the end of the Constellation Cup, has left a significant hole in that department.

Thwaites was an excellent back-up to Bassett, a great player in her own right, who was capable of turning games for the Diamonds.

If Bassett gets injured, it’s not obvious who would be able to step into that role.

New Zealand’s ANZ Premiership allows one import per team, but for the 2020 season, just two of the six teams have contracted an import player.

While our domestic competition might be weaker than Australia’s, highlighted by the unbeaten run of the Collingwood Magpies at the recent Super Club tournament, it’s still got plenty going for it.

Four overseas imports who started out in New Zealand have been lured to the Australian league over the last three years – Lenize Potgieter, Jo Harten, Mwai Kumwenda, and Jhaniele Fowler.

But that’s allowed shooters like Ellie Bird, Jennifer O´Connell, and Grace Nweke to get court time.

And judging by Taurua’s comments, those are the kind of players she wants to develop.

“Making sure that we have a lot of players in stock, that are fit enough but also are capable of playing under pressure so I’m building that next level down.”

The Silver Ferns head to England next month, where they will play the hosts, Jamaica and South Africa in the Nations Cup tournament.