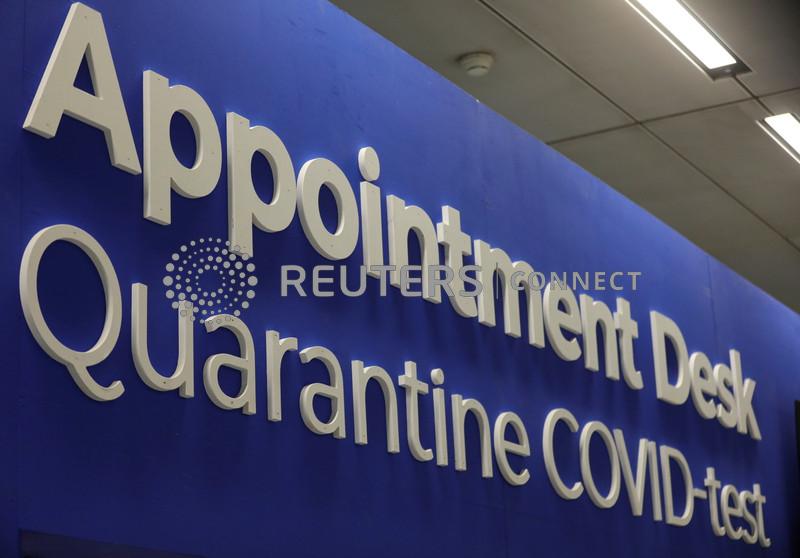 The "Appointment Desk" for quarantine and coronavirus disease (COVID-19) test appointments inside Schiphol Airport is pictured after Dutch health authorities said that 61 people who arrived in Amsterdam on flights from South Africa tested positive for COVID-19, in Amsterdam, Netherlands, November 27, 2021. REUTERS/Eva Plevier

AMSTERDAM (Reuters) – Dutch military police on Sunday said they had arrested a married couple who left a hotel where they were in quarantine after testing positive for COVID-19, and were attempting to flee the country.

The police known as the Marechausse said in a statement the pair were arrested “in an airplane that was about to depart.”

Dozens of passengers who tested positive for COVID-19 after arriving on two flights from South Africa on Friday are being kept in quarantine at a hotel near Amsterdam’s Schiphol airport.

The Marechausse statement said the pair, whose names and nationalities were not released, had been turned over to health authorities.

In all 61 of the more than 600 passengers on the flights from Johannesburg and Cape Town tested positive for COVID-19. Most are quarantining at the hotel, though some Dutch residents were allowed to quarantine at home.

Dutch health authorities said earlier Sunday that at least 13 of the 61 are infected with the newly identified Omicron variant of the virus.

The Marechausse did not release further details of the couple’s medical status.