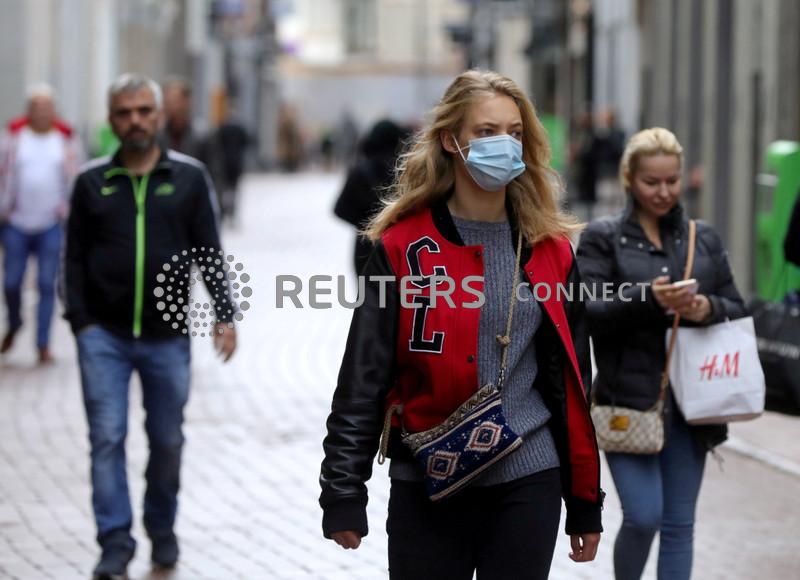 FILE PHOTO: People walk on a street while shopping amid a renewed spread of the coronavirus disease in Amsterdam, Netherlands October 7, 2020. REUTERS/Eva Plevier

AMSTERDAM (Reuters) -The Dutch government’s plan to scrap the “corona pass” for people not vaccinated against COVID-19 faced strong opposition in parliament on Tuesday, including from within the ruling coalition.

The pass, which grants access to indoor public venues, is now available to people who have been vaccinated, have recovered from COVID-19 or have tested negative for the virus. Under a proposal put forward by caretaker Prime Minister Mark Rutte on Friday, the last option would be dropped.

But in an evening debate, even one of Rutte’s own four-party coalition government partners expressed concerns that it would cause social division.

Lawmaker Joba van den Berg of the Christian Democrats said her party, which would be needed to usher a new law on the proposal through the lower house, wanted to weigh less divisive alternatives. “Polarization will not get us out of this crisis,” she said.

It was unclear whether the coalition government would be able to scrape together a majority of seats given criticism that it would turn some people into “second-class citizens” and infringe upon civil liberties.

The government was reviewing a draft law, which would not be put to a vote on Tuesday.

The Netherlands re-imposed some lockdown measures last weekend for an initial three weeks in an effort to slow a resurgence of coronavirus contagion, but infections have continued to spread.

The National Institute for Health (RIVM) on Tuesday reported a record of more than 110,000 cases in the week ended Nov. 16, an increase of 44% from the week before, with the strongest rise among children aged 4-12.

Hospitals have been forced to scale back regular care to make space for a surge in COVID-19 patients. About 70% of those in intensive care last month were unvaccinated or only partially vaccinated, RIVM figures show.

Among measures in place since Saturday are the early closure of supermarkets, bars and restaurants, social distancing, restrictions on sporting events and a recommendation that people work from home.

Nearly 85% of the adult Dutch population has been fully vaccinated. Since the start of the pandemic, the Netherlands has recorded 2.27 million COVID-19 cases and 18,695 related deaths.