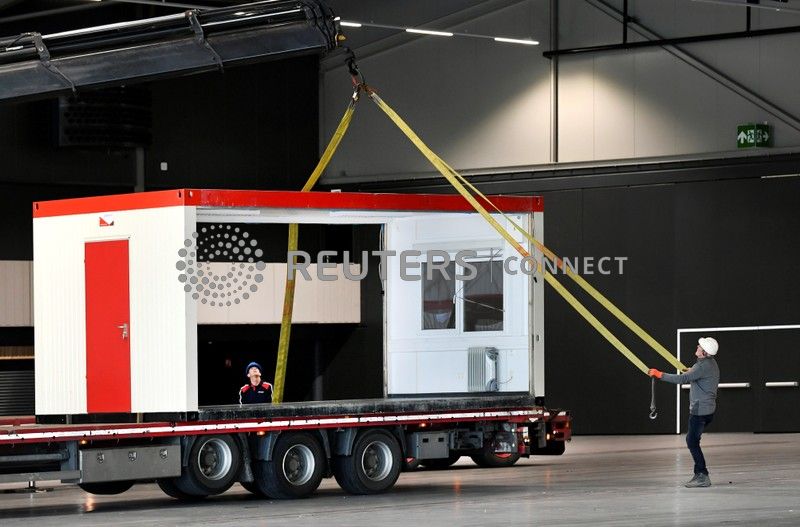 FILE PHOTO: Workers work on a unit inside the concert hall Ahoy, that should have hosted the Eurovision song contest in May, and now is used as an emergency hospital, as the spread of coronavirus disease (COVID-19) continues, in Rotterdam, Netherlands March 30, 2020. REUTERS/Piroschka Van De Wouw/File Photo

THE HAGUE (Reuters) – Doctors in the Netherlands have been advising elderly patients to think twice before agreeing to COVID-19 treatment in hospital intensive-care units, drawing criticism that they are attempting to ration scarce ICU beds.

The affluent Netherlands is rapidly approaching the capacity of its healthcare system just over a month into the crisis, with efforts underway to double the number of intensive care beds to 2,400 by Sunday.

But with thousands of virus patients flooding IC wards, space is expected to run out within days. Hospitals fear the Netherlands will be forced to emulate Italy, where doctors had to make life or death decisions about who received emergency treatment.

Dutch MP’s raised public concerns in parliament on Wednesday after senior citizens complained about calls from doctors who raised questions about intensive care treatment, such as being put on ventilation, if they were to contract COVID-19.

The government of Prime Minister Mark Rutte was asked to clarify its policies and explain what had prompted the calls.

“The elderly are afraid that if they fall ill, they will not be welcome on the intensive care unit and will be left to die at home,” MP Henk Krol, who leads the 50PLUS party for seniors, told lawmakers.

“They think that age alone determines whether or not they will have access to a hospital,” he said.

“NOT BASED ON AGE”

“This is standard practice for doctors. We call it advanced care planning, it means having the conversation with people about ‘what you would want to happen if you get sick’,” De Jonge said.

“Patients can then say ‘if it gets to the point where I need a ventilator, where I need to go into the ICU, I would prefer not to do that’. That is a possibility, but those conversations are not based on the age of patients.”

The Dutch College of General Practitioners (NHG), which represents 12,000 doctors, denied the calls were a response to a shortage of beds.

“Some GPs started calling patients who were taken aback by these questions and because of the timing they think this is linked to a lack of hospital capacity,” Jako Burgers, a practicing GP and spokesman for the NHG, told Reuters.

Burgers said the conversations enable doctors to warn frail patients about the dangers of COVID-19 treatment, which can involve weeks on a ventilator in an ICU and then lengthy rehabilitation.

The Dutch have long had fewer ICU beds than neighbouring European countries, ranking among the bottom five in a 2012 study published in the Intensive Care Medicine journal.

The comparison of available ICU beds per 100,000 inhabitants put Germany at 29, Belgium at 15.9 and the Netherlands well below the European average at just 6.4.