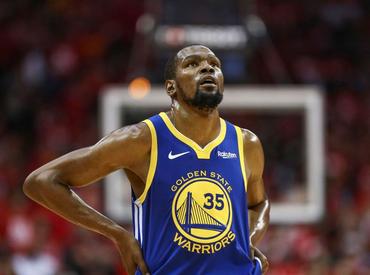 FILE PHOTO: May 6, 2019; Houston, TX, USA; Golden State Warriors forward Kevin Durant (35) reacts after a play during the third quarter against the Houston Rockets in game four of the second round of the 2019 NBA Playoffs at Toyota Center. Mandatory Credit: Troy Taormina-USA TODAY Sports - 12657562

(Reuters) – Brooklyn Nets forward Kevin Durant will headline the list of 16 National Basketball Association players who will compete in a NBA 2K video game tournament to help support coronavirus relief efforts, the NBA and its esports arm said on Tuesday.

Durant, the NBA’s most prominent name to test positive for the coronavirus, is the top seed in the players-only tournament that begins on Friday and concludes on April 11.

The tournament, during which players will compete from their homes, was announced three weeks after the NBA suspended its season until further notice after one its players tested positive for coronavirus.

Two-times NBA champion Durant, who has been sidelined with an Achilles injury suffered during last June’s NBA Finals while a member of the Golden State Warriors, will open the tournament against Miami Heat forward Derrick Jones Jr. on Friday.

All players will use the roster of one of their eight pre-selected current NBA teams that they may use only once during the tournament.

The tournament champion will select a charity beneficiary to receive a $100,000 donation in support of ongoing coronavirus relief efforts.