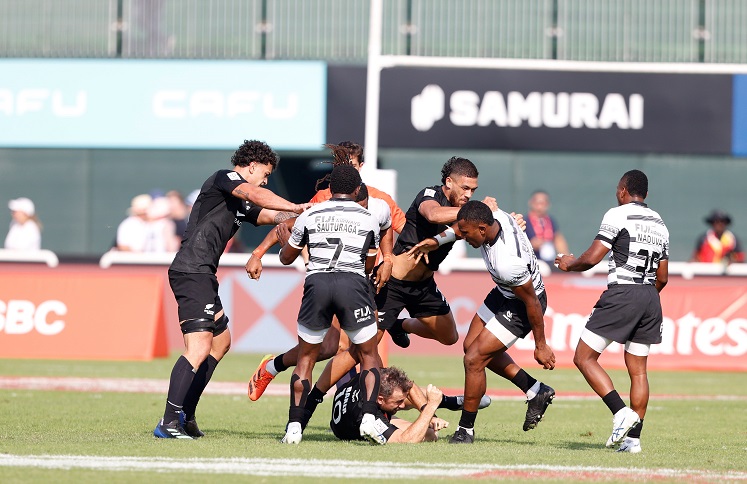 The Fiji men’s 7s side failed to make the cup quarter-finals at the Dubai tournament.

With Fiji, New Zealand and Argentina all grouped together, Pool B was set for some epic encounters and so it proved with the race for the quarter-final spots going right down to the wire.

All three teams finished on seven points apiece having each achieved two wins and a loss, but it was Fiji who missed out on points difference.

Joseva Talacolo starred for Fiji on day one but his match-winning try against Argentina in a thrilling Pool B finale was still not enough to save Ben Gollings’ side from another early elimination in the desert.

Having beaten Uruguay 52-0 but then suffered a 24-7 defeat to New Zealand in their second match, Fiji needed to beat Los Pumas by 10 points to progress, but they fell five points short of their target, winning 17-12.

Fiji have now failed to qualify for the quarter-finals in three of the past four Dubai tournaments. Instead, it is Argentina and New Zealand who go through by the narrowest of margins.

They, too, easily swept aside Uruguay, and it was the All Black Sevens’ result against Fiji in a re-run of the final of Rugby World Cup Sevens 2022 that ultimately proved crucial.

The biggest match of the day brought together two teams normally accustomed to facing each other in Cup finals, and All Blacks Sevens captain Sam Dickson described the match-up as “do-or-die”.

“We are all disappointed with the result,” O’Connor said.

“Despite winning two pool games the results were not in our favour.

Hopefully they do bounce back in the next tournament.”

Meanwhile, the Fiji men’s 7s team defeated Uganda 29-14 in the first 9th place quarter-final and was to play Kenya at 9.15pm in the 9th Place semi-final.

The Fijiana team was knocked out in women’s quarter-final to Australia 38-21 and was to face Spain in the fifth place semi-final at 9.08pm when this edition went to press.