Drought-hit Kenyan herders save wildlife – and their livelihoods 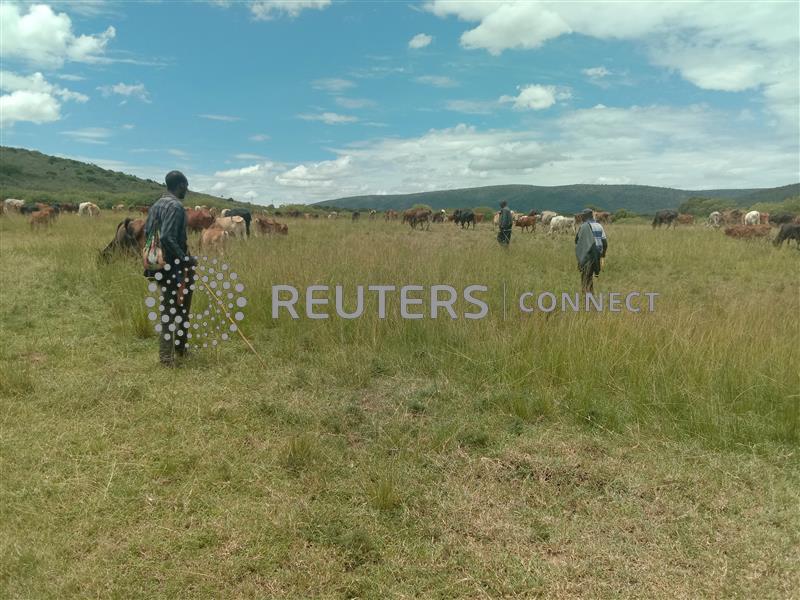 OLCHORO OIROWUA VILLAGE, Kenya (Thomson Reuters Foundation) – When Robert Nampaso and more than 30 other Maasai livestock-herding families leased some of their land in western Kenya to a large-scale farmer, they thought the rent would bring in much-needed extra income.

Overgrazing, rampant deforestation and relentless cycles of drought had badly degraded the land around Olchoro Oirowua village, forcing their animals to compete with local wildlife over dwindling supplies of water and pasture.

But the deal only made the problem worse when the farmer cleared some of the land to grow crops and later to raise cattle, further shrinking the amount of available pasture and driving out the wild animals.

So together they came up with a solution that puts nature first, converting some of the farmland into sustainably managed rangeland to create a wildlife conservancy where cattle and wild animals can co-exist and eco-tourism provides jobs for local people.

“The strong bond between nature, wildlife and pastoralism has remained for generations – that’s why our livelihood has survived all these years,” said Nampaso, 53.

Around the world, efforts to set aside land for conservation are being squeezed by the ravages of climate change impacts including worsening drought, the growth in human settlements, and the loss of tourism revenue through the COVID-19 pandemic.

Herders graze their animals under rules designed to have minimal environmental impact, including bans on crop farming and permanent structures such as fences or homes, and a restriction on the number of livestock allowed into the area at any one time, said community liaison officer Daniel Nampaso.

To prevent overgrazing, the pastoralists follow seasonal patterns that ensure there are always areas of pasture where wild animals can eat.

They have returned as a result, while the herders’ livestock are thriving, said Nampaso, who was among those who donated their land to the project.

“Since we started grazing management, our members have never experienced a shortage of pasture and water,” he said.

The United Nations Environment Programme points to the global food system as the primary driver of biodiversity loss, and notes that the International Union for Conservation of Nature identifies agriculture as a threat to more than 85% of the 28,000 species at risk of extinction.

“Expansion of agricultural areas has been a key factor in the degradation of nature, including forest habitats,” said Claudia Ringler, deputy director of environment at the International Food Policy Research Institute (IFPRI).

Rebekah Karimi, a manager at Enonkishu, said the conservancy helps slow deforestation because pastoralists no longer need to make ends meet through logging or charcoal production, cutting down trees that are essential to curbing carbon emissions and limiting global warming.

The pastoralist landowners still get rent from their farmer partner, who manages the land, as well as a share of tourism revenue.

Villagers also work as wildlife community scouts, spreading the word about conservation and reporting animals that stray into villages or farmland to the Kenya Wildlife Service (KWS), which returns them safely to the protected area.

Before the conservancy was established, many of those animals likely would have been killed, Karimi said.

Lions, elephants and other large animals would often wander into villages looking for food and water, attacking livestock and destroying crops.

Villagers would retaliate by killing any animal that came near, Karimi said.

But those incidents have fallen dramatically since the conservancy launched, she said.

That’s partly due to the project’s work conserving local springs and piping the water to troughs around the area.

That way, the cattle and other animals that graze alongside them – including zebras, gazelles and giraffes – always have enough to drink and predators do not need to leave the conservancy to find food.

The Enonkishu initiative also bucks tradition by giving women a chance to help make decisions about how the land is managed, a task Maasai culture usually reserves for men.

“It’s a resolution that was agreed by the members of the community,” said Mama Yianti, a farmer living in Olchoro Oirowua. “The conservancy meeting won’t take place without us.”

Conservancies have become increasingly popular since Kenya changed its land use policy in 2009 to encourage sustainable management of wildlife, said Richard Chepkwony, assistant director at the KWS.

In Narok County, a region under Chepkwony’s jurisdiction, the amount of land preserved for wildlife has doubled to 3,000 square km (1,158 square miles) over the past 15 years, with half of it donated by local communities, Chepkwony said.

“Without conservancies, we could have lost the majority of wildlife in this country,” he said.

Faith Alubbe, chief executive officer at the Kenya Land Alliance, said such conservation partnerships between communities, private landowners and businesses play a vital role as governments around sub-Saharan Africa are turning wildlife space over to infrastructure and large-scale farming.

But as Kenya works toward its goal of designating 30% of its land and sea areas to conservation by 2030 – in line with a U.N.-backed “30 by 30” drive  – the government should take more responsibility for protecting land and animals, Alubbe added.

“In Kenya, we have a lot of land policies, but implementation has been a big problem,” she said.

At Enonkishu, Robert Nampaso is proud to be on the frontline of conservation, helping his community restore the relationship with nature that runs deep in Maasai culture, he said.

“The lion is considered one of our domestic animals now,” he said. “It is no longer an enemy but of great value (because) we get paid when tourists visit to see them.”