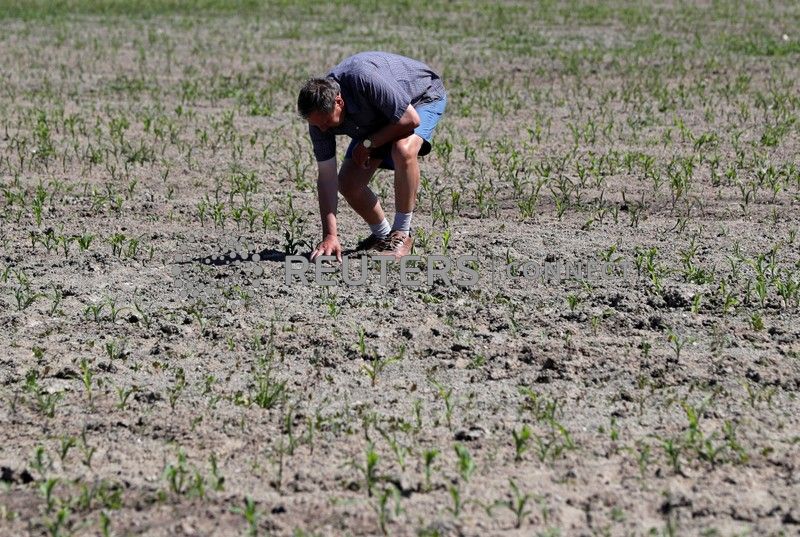 Belgian farmer Joel Van Coppenolle looks at dry earth on one of his fields as Belgium is undergoing its driest April-May period since the end of the 19th century, according to local media, in Diksmuide, Belgium May 28, 2020. REUTERS/Yves Herman

BRUSSELS (Reuters) – As coronavirus lockdowns disrupt food supply chains and shuttered restaurants curb demand for some of their produce, Belgium’s farmers are grappling with another crisis – drought.

Belgium is facing its driest May since the 19th century, with conditions that have stunted crop growth and cut yields in the agricultural province of West Flanders.

The region’s governor Carl Decaluwe on Monday banned water pumping from streams running off the Yser river, after levels fell below 2.9 metres.

“We had to do it because otherwise the damage would be irreparable,” Decaluwe said, adding a prolonged drought could cost the region “tens of millions” of euros in damages.

“We haven’t seen such low water levels in 30 years, and we are experiencing the driest weeks in 120 years.”

For farmers, who usually pump riverwater into their fields, the ban has left them waiting for rain.

“Normally I get 50 to 60 tonnes of corn from an acre. But now we will have to be happy with only half of that – on the condition that it will start raining again,” Joel Van Coppenolle, a farmer from the town of Kaaskerke, said. As he spoke, he stood in fields where his corn seedlings are half their usual size, and the soil is cracked and dusty.

The European Union cut its yield forecasts for almost all crops in May, as western and central Europe faced a second month of above-average temparatures and low rainfall.

“It could be rainfall for weeks, it could also be a drought for weeks,” said David Dehenauw of Belgium’s Royal Meteorological Institute.