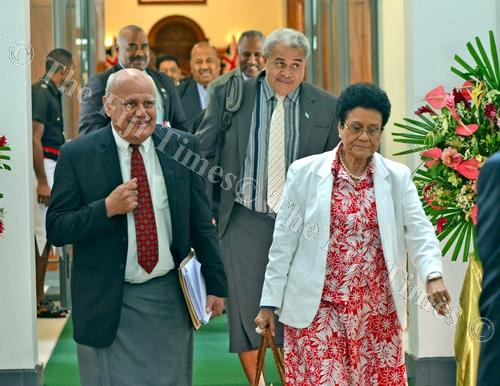 PROMINENT businesswoman and Social Democratic Liberal Party (SODELPA) parliamentarian Dr Mere Samisoni says the party supports promoting women’s rights and their equal representation in parliament.
Dr Samisoni said they supported all 17 Sustainable Development Goals(SDG), particularly number five on gender equality and number seven for reduced inequality.
She said there was a need for women to create their own seat at decision-making levels.
“Men and women are more aware of the barriers or discrimination by the “traditional boys club mentality” through education, awareness programs, such as SDGs supported by identifying male member of parliament champions in gender-related activities,” Dr Samisoni said.
“The awareness programs remind men of their relationships in their own families that include sisters, mothers, grandmothers and daughters and the love they have for them. If this is not normal, such as bully behaviour or power games, then trained psychologists are available to reform, change and account for behaviour that tap and empower self-worth and self-esteem for positive outcomes.”
She said human beings were basically designed for human values in positive outcomes.
“As a Christian and believer in faith and grace, good over evil and right over wrong are the values to live by daily,” she said.
She added violence against women and children was on the rise and it was reported on more, therefore, the statistical surveys were extremely important to promote.
“Fiji Bureau of Statistics (FBS) should publish ethnicity because we are a multi-ethnic, multiracial diverse society. This defines Fiji and our diversity should be celebrated not be neutralised. The 2017 census did not publish this information. The public paid for this information and they have a right to know the ethnic distribution.”
She added confusing race with racism was intangible discrimination and this could be removed at source through statistical significant testing in the methodology design.
“Statistical analysis is designed to remove bias and generalisation when propositions are tested to be significantly rejected or accepted. The latter then becomes theory. In my professional opinion, I argue that political interference with independent professional bodies like FBS, do not help the struggle against violence against women and children based on tradition.”