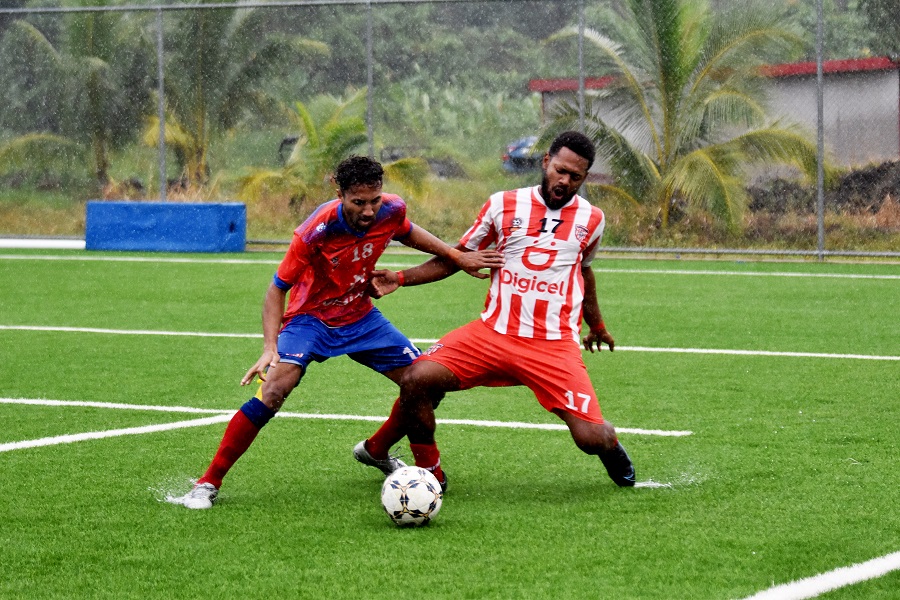 The Navua versus Labasa match in the Digicel Premier League yesterday had a bit of everything.

Two goals, two red cards, a number of yellow cards, rain causing the delay in resumption of the second half by 20 minutes, it had it all.

The match started under slippery underfoot conditions as both teams tried to get their acts together.

There was hardly much to cheer for the fans in the first spell as both teams rested tied nil-all at halftime.

The referee postponed the start of the second spell by 20 minutes as there were pools of water all over the ground.

The wait was worth it for the fans as when the second spell kicked off, some good football was showcased.

Navua got on the board first when Mathew Charitar headed in a corner from Vinit Chand.

Labasa pressed on the Navua goal and had their work cut out for them when Navua’s Aisake Naduvu was sent off for a second bookable offense.

As Labasa pressed for an equalizer, frustrations creeped in and their defender Sekove Naivakananumi was sent off for throwing a punch on a Navua player.

The northerners didn’t lose hope and were rewarded when Christopher Wasasala tapped in the equaliser in the 90th minute.

Navua president Rajeev Prasad said they could have won the match but lapse of concentration cost them the three points.

“Our boys played well. We just had minutes to hold on but it wasn’t meant to be. We are happy with the one point though as every point is crucial for us,” Prasad said.

“They kept in trying and didn’t give up and that’s what you do in football. We would have lived to win here but considering the ground conditions and the was Navua approached the match, we will take the one point.”