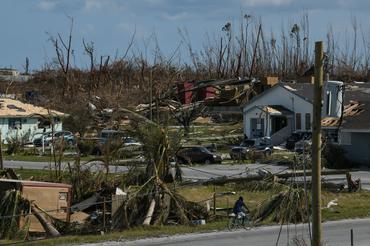 A man rides a bicycle past damage in the wake of Hurricane Dorian in Marsh Harbour, Great Abaco, Bahamas, September 7, 2019. REUTERS/Loren Elliott

Board member Torsten Jeworrek, speaking at an industry conference, said that the estimate was a “rough guess” as damage was still to be tallied.

Dorian ripped into the Bahamas earlier this week, leaving a trail of destruction and death, before pounding parts of North Carolina and moving on to Canada.

Separately, Jeworrek said he expected reinsurance rates to rise further across the industry, stabilizing after years of declines.

The “clear expectation” is a “further stabilization and price increases,” Jeworrek said.