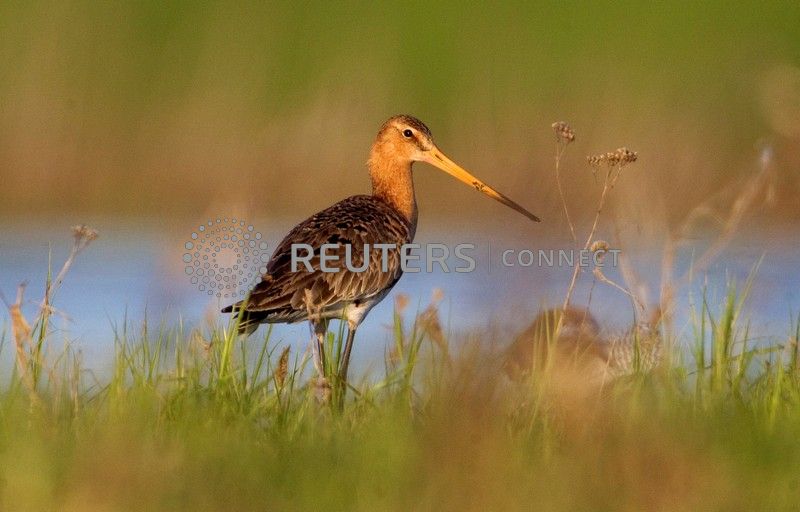 FILE PHOTO: A black-tailed godwit is seen on the bank of Prypyt river, near the village of Veresnitsa, some 270 km (168 miles) south of Minsk, May 6, 2013. TREUTERS/Vasily Fedosenko

LISBON (Reuters) – Thousands of people in the Netherlands have signed a petition objecting to the construction of an airport in Portugal that could threaten the black-tailed godwit, the Dutch national bird.

The new airport will be located on the south bank of Lisbon’s Tagus estuary, a nature reserve where the godwits, a threatened species, stop off on their way from Africa to the Netherlands.

“What is the point of protecting the godwits in the Netherlands if they are weakened or even die in Portugal?” says the petition, which has so far been signed by 26,000 people.

Portugal’s environment agency gave the green light for the airport in Montijo last month but said it must take steps to protect wildlife. The project has been heavily criticised by environmentalists at home and now abroad.

Vogelbescherming Nederland, the Dutch nature conservation organisation behind the petition, said the Tagus estuary is a vital feeding break for the godwits.

“They eat crop residues in the rice fields before they fly to our country to breed,” they said. “But if the Portuguese government gets its way, that will soon be over.”

Researchers also say birds are at risk of colliding with aircraft and will be driven away by noise.

Writing in Portuguese newspaper Publico, assistant secretary of state Alberto Souto de Miranda said people should not worry because “birds are not stupid and it is likely they will adapt”.

“That’s like cutting down a forest and saying it’ll find somewhere else to grow,” he told Reuters. “Life isn’t that simple.”