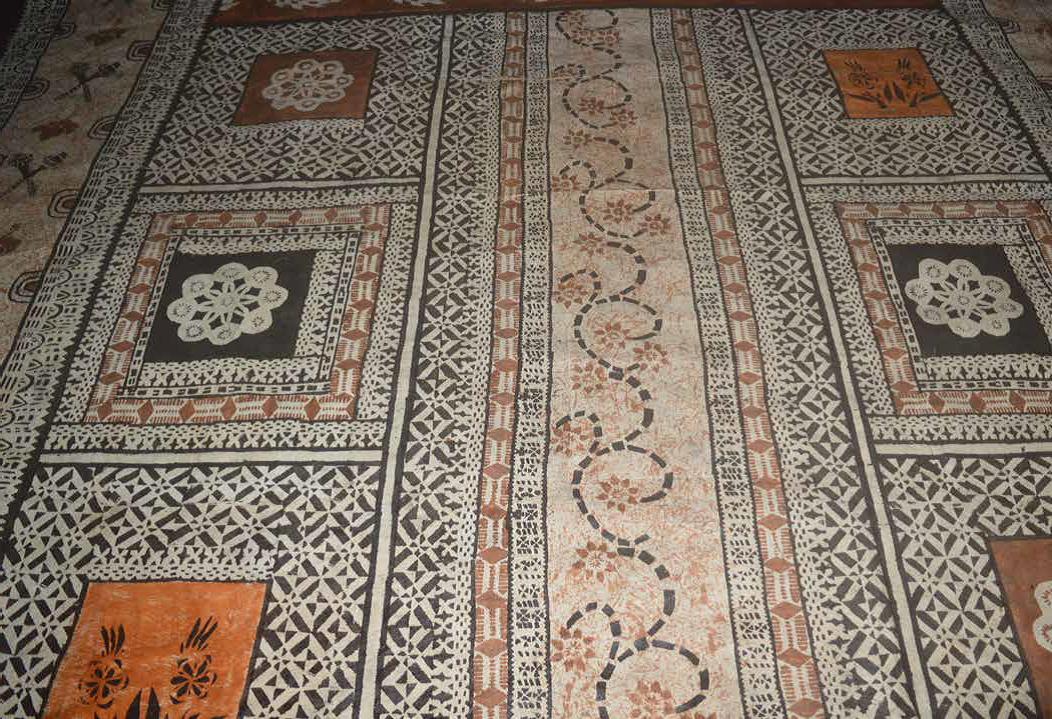 On the island of Vatulele, most famous for its mythical red prawns and mysterious cliff wall paintings, hearing the monotonous heavy thud of wood against wood is something you won’t be able to evade.

In fact, this sound has become so intrinsically woven into the islanders’ way of life, that not hearing the ike (mallet) bang on the low table called yatua would be regarded as peculiar.

The ike, usually made from the native tree, yaro, while the yatua, from the trunk of hardwood trees such as vesi or wewe, are complementary work tools used for generations to produce the famous sounds of Vatulele – the tutu .

Tutu or masi beating only stops on Vatulele on three occasions -when someone dies, when an important gathering takes place in the village and on Sundays.

This shows how masi production supports family livelihoods and ensures that the traditional art form continues to be practised among island women and girls.

Producing fabric from the masi or paper mulberry plant has been the most valued artwork among i-Taukei women for thousands of years.

It is a painstaking exercise too.

Each stage demands immaculate workmanship women of Vatulele have mastered through knowledge and skills passed down countless generations.

The journey of the masi fabric or tapa starts in gardens scat- tered on the island’s sandy flatland where one plant takes a couple of months to reach maturity.

“Masi is our biggest cash crop on the island.

“Some women have as many as five plantations, each having thousands of standing masi plants.”

One such woman is, Joana Masau. Since the death of her husband several years ago, she has had to take up her deceased spouse’s role and today supports a daughter and two grandchildren.

She has five masi plantations, each with more than 1000 masi plants.

“If you are lazy, you cannot achieve anything,” Joana says, “As a widow, I have to be both a mother and father. I have to work a little harder.”

Once ready, the long slender stem of the masi plant is harvested and its bark is stripped from the woody stem. The outer waste “skin” is removed from the bark and soaked in water.

Influenced by today’s commercial demand for masi, this process can take only a few minutes to a day.

“In our days, masi bark was soaked in seawater for many days to soften and turn white,’ Vaulini Matebula, 83, told The Sunday Times.

“We produced masi only for traditional events and when it was needed. This took many weeks and we prided ourselves in perfecting each stage of production. Masi was our tabua.”

According to historical records, when the early Lapita peoples sailed into the Pacific, including Fiji, they settled in an environment that was susceptible to the elements and natural disasters.

The fabric they produced for clothing and cultural ceremonies was fashioned out of resources that were readily available locally.

In old Fiji, masi cloth had a variety of uses. Soft barkcloth was used for medicinal purposes and as sponge used when feeding newborn babies and the aged.

Pieces of single-layered masi, mostly plain, were used as turbans and shrouds against the wind, heat and cold.

Masi strips were used as bandages and lint.

Barkcloth was also used for clothing, turbans, bedding, house curtains and soft mattresses for babies and the elderly. Two sacred tabu uses of masi included sanitary pads and in circumcision.

It was also used as a litmus test to determine whether or not a newly married woman was a virgin.

On the night a marriage is consummated, the groom’s aunts usually spread out a sheet of plain masi on the couple’s bed.

They inspected the sheet in the morning for any bloodstains. When a bride is declared a virgin, the village erupts in drum-beating, merrymaking and feasting over roasted pork and root crops.

Old tattered barkcloth was used as lamp wicks and toilet paper. After the settlement of Fiji by the early Europeans and Christians, some domestic uses of the masi were terminated together with their sacred religious use.

However, in Fiji today, masi cloth remains an important part of the local culture, rituals and traditions.

It is also a form of livelihoods.

Ceremonially, it was used during a human’s three most important life stages – birth, marriage and death.

At weddings, printed masi is worn as a ceremonial dress for both the bride and groom.

During funerals, it was used as wrapping around the deceased while today it is used as coffin and grave covers.

On Vatulele, regarded the masi capital of Fiji, once the masi is thoroughly soaked in freshwater (before saltwater was used), each full length of stripped bark is beaten end to end on the yatua. This stage is perhaps the most labour intensive and requires strength.

While masi beating sounds all the same to the visitor, each woman uses a unique rhythm and consistent hand pressure, much like the man who beats the lali during a village meke.

“Tutu (beating) for decades can strain the arm. I started when I was a small girl and continued until a few years ago because I injured my arm,” said Litia Tubailago, 70.

“Now I pay women in the village to harvest, beat and print for me. Men help in planting and beating but kesakesa (printing) is only done by women.”

Masi beating goes on throughout the day like persistent island drumbeats. It ends at dusk, just in time for women to prepare dinner.

One full length of bark (from one plant) is folded carefully and beaten again to ensure both ends of barkcloth have equal width and thickness.

Between four to six sheets are then stacked on top of each other and beaten together to get the required length, width and thickness.

“The pressure at which the ike strikes on the bark spread out on the yatua must be consistent, too much and the bark will tear, too light and the bark won’t spread out,” said Maca Ratubuli, an expert in making masi from Ekubu, the island’s chiefly village.

Once it reaches its required size, the beaten bark is then taken outside and placed on special drying racks. Woman use corrugated iron sheets but in olden days they were dried on the hot stand and clamped down using stones.

The drying phase used to take about a week because once beaten women would further soak the barkcloth in seawater and hang them out (a number of times).

“This technique of doing several rounds of soaking (with seawater) and sunning makes the finished plain fabric white as blank paper,” Matebula, one of Ekubu’s oldest women told The Sunday Times.

“Pressured by deadlines and masi orders, the women of Vatulele now have shortened the drying stage. The result is our masi don’t look uniquely white anymore like they used to.”

Decades ago, women on the island used the half-cooked underground starchy tuber (similar to potatoes) of a plant called yabia to glue dried masi sheets together.

Women also used a paste of white flour mixed with kerosene but this often attracted rodents and insects.

The next step of masi making is printing or kesakesa, which requires the placement of traditional designs or motifs (known as vamata in the Vatulele dialect) on the plain sheet of masi using either black or brown natural dyes.

The primary dye used is extracted from boiled mangrove bark. Boiling takes a day or two, depending on the heat of the fire.

A mixture of bark and water is first boiled and sifted to remove any solid residue.

The strained liquid is then boiled continuously in an open fire until it thickens up.

Once the required viscosity of boiled dye is reached, it is taken off the fire and put in special containers.

Mangrove dye is brown in colour.

Black dye is obtained by mixing mangrove dye and carbon soot, obtained through the process of incomplete burning.

To collect soot, a metal drum is inverted over a burning kerosene lamp that produces suffocating black and thick smoke.

“To ensure natural dyes stay long on the masi after printing (kehakeha), they are mixed with grated clay,” Matebula said.

* History being the subject it is, a group’s version of events may not be the same as that held by another group. When publishing one account, it is not our intention to cause division or to disrespect other oral traditions. Those with a different version can contact us so we can publish your account of history too — Editor.