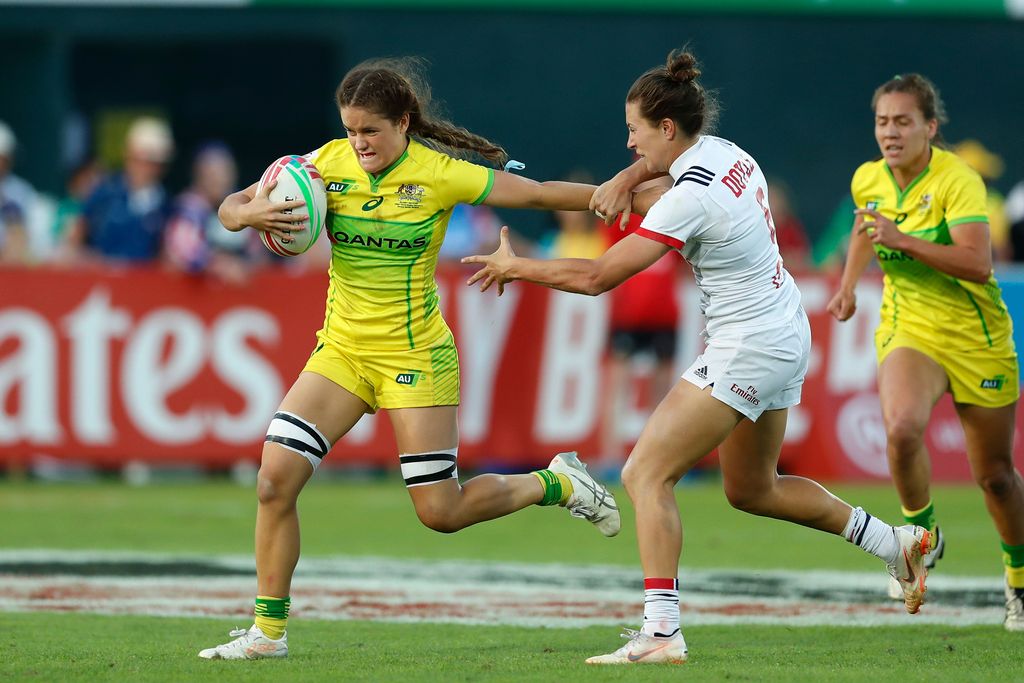 IN her latest exclusive column, Australia star Dom du Toit is excited by her return to the HSBC World Rugby Sevens Series after almost a year out and the fact that 2020 is Olympic year.

What a ‘rippa’ of a back-to-back tournament! I wasn’t there but all reports from the team are that Cape Town is the new favourite tournament on the World Series. From the hospitality, culture and scenery to the food, the stadium and the crowds, everyone loved Cape Town.

The double leg started off in Dubai with the girls going undefeated through the pool stages, winning all of the games convincingly and looking super sharp. A loss to Canada in the semi-final put the team out of gold medal contention and a second loss to the USA meant the team finished in fourth place.

Having just one week before they had to back it up again and play the next tournament there was no time to feel sore or sorry. Reviewing both their own performances and that of the other countries, the girls we going to be ready for whatever was thrown at them in Cape Town.

The training during the week in between the two tournaments was much lighter than usual due to the back-to-back rounds, ensuring that the girls were as fresh as possible come game day.

The big pool game was Australia v USA, a rematch of the bronze final from the week before. After the team came out on top all of us back home could feel the positive vibes and energy from all the way back in Aus.

In the end going down to New Zealand in the gold medal match was tough but there were so many positives to come out of it. In just one week the team was able to build on their performances from Dubai to go from fourth to second and so many young girls really stepped up to the plate showing what a bright future Australian women’s rugby has.

Coming home we had one more week of the whole squad training together before going on Christmas break where we would be able to go home and train off site on our own. We were again reminded (mostly me) as we are with most festive holidays, that they are just ONE DAY so we don’t need to indulge in all the goodness and deliciousness for the entire month. Spending some time with family and friends over Christmas was really special for everyone and it was great to be able to recharge and prepare for 2020.

IT’S OLYMPIC YEAR!!! We returned on 3 January to some blistering hot Aussie sun. The mood was a little bittersweet; the excitement levels for the year ahead were at an all-time high but there was also major heartbreak for those that had been affected by the devastating fires that were raging around Australia, tearing through homes and killing billions of wildlife.

Some of the girls have personally set up go-fund me pages to help raise money for towns while others have gathered supplies and much needed essentials to deliver to communities that have been affected. Rugby Australia have also announced that they will donate $500 for every try that the men’s and women’s teams score at the Sydney Sevens which is an even bigger incentive for us to win and get lots of meat pies!

Our training the past two weeks has been very intense but also very exciting as Emilee Cherry, Emma Sykes and I all returned to full training! Emilee (aka the GOAT) hasn’t played since the World Cup in San Francisco in July 2018, so to say I’m excited to be training alongside her again is a massive understatement!

Anyone who has been injured or has had to have time away from playing knows how hard it can be to have to sit on the sidelines. But they also know how good it feels when you are able to get back on the field with your team-mates. It is a great big ‘YABBA-DABBA-DOO’ feeling!

Looking at Hamilton and Sydney the set-up is a little different as there will be no quarter-final matches. The top team of each pool and the next best team will proceed to the semi-finals. Our pool will see us face Russia, Brazil and USA and with USA chasing us just two points behind on the overall series standings it will be a big pool game.

This doesn’t change anything though, we will be going into all of the games with the same goal in mind, I know it sounds a bit cliché and robotic but it’s true.

Following Hamilton, we will be coming home to Sydney to play the next tournament on home soil!

As this is the only tournament we play in Australia it’s very special for our friends and family to get the opportunity to come and support us. It gives us all that little bit of extra fire in our bellies when we run out in the gold jerseys.