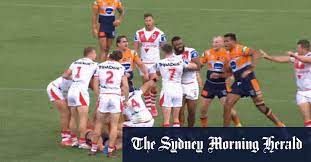 The Knights are privately fuming over the incident which ignited an all-in-brawl mid way through the second half of Sunday’s match in Newcastle, and prompted several Dragons players to apologise to Newcastle on Mikaele Ravalawa’s behalf. Picture: SMH

SYDNEY, 07 APRIL 2021 (SMH) – This is the vision of Mikaele Ravalawa taunting a concussed Kurt Mann that has left Newcastle players and officials seething over the “unsportsmanlike” actions of the St George Illawarra winger.

The Knights are privately fuming over the incident which ignited an all-in-brawl mid way through the second half of Sunday’s match in Newcastle, and prompted several Dragons players to apologise to Newcastle on Ravalawa’s behalf.

Several Dragons’ players showed concern for the welfare of their clearly dazed former teammate, rushing to his aid the moment he was steamrolled by Ravalawa in the 56th minute.

Dragons halfback Adam Clune held off a fired up Ravalawa, who walked away to sledge Jacob Saifiti before returning to the point of impact to launch a verbal tirade while laughing at Mann on the deck. St George Illawarra teammates Matt Dufty and Zac Lomax also attempted to keep the Fijian winger away from Mann.

It comes as the NRL prepares to introduce further precautionary measures to deal with the impact of concussion on the sport. Knights coach Adam O’Brien quizzed his players about the incident after the game, unaware of what sparked the push-and-shove that saw the Dragons awarded a penalty for a shoulder charge from Jacob Saifiti that will see the prop miss 1-2 weeks through suspension.

Newcastle didn’t want to escalate the matter when approached for comment on Monday, however it has been described as a “dog act” and “unsportsmanlike” by people within the Knights.

The incident will add plenty of spice to the fixture when the two teams next meet. To Ravalawa’s credit, he approached Mann to check on his welfare as the five-eighth was being helped from the field.

“He was really concussed and I remember looking down into his eyes and he wasn’t there,” Tariq Sims said after the game. “I know the Knights staff will make sure he’s ready to go whenever he’s ready.”

Meanwhile, Mitchell Pearce will require surgery on a torn pectoral muscle that is expected to sideline the Newcastle halfback for up to 10 weeks.

It comes as the Knights have once again signalled their interest in acquiring the immediate services of dumped Cowboys halfback Jake Clifford ahead of his arrival in Newcastle next season.

The Cowboys axed the Newcastle-bound Clifford last week, with Knights officials asking North Queensland if they would grant the playmaker an immediate release if they have no intention of playing him in first grade.

The Cowboys are refusing to budge despite the Knights’ grim predicament on the injury front. Pearce, who left the field in the first half of Sunday’s loss to St George Illawarra, had scans on the injury on Monday afternoon.

The scans revealed the halfback requires surgery immediately, but the club is hopeful he will be back on deck by round 14 when the Knights take on South Sydney at Stadium Australia on June 12.

The Knights have been rocked by injury and will struggle to name a 21-man squad on Tuesday and may have to seek an exemption from the NRL to name players outside their top 30.

“I don’t think I’ll be able to name 21 [on Tuesday],” O’Brien said after the game. “Naming the team is probably going to be a real big hurdle this week.”

Knights prop David Klemmer also underwent an MRI scan on Monday. The news isn’t as bad for the Newcastle enforcer, who has been cleared of a major injury despite playing the last 30 minutes with a knee injury.

Klemmer is touch-and-go to play against the Gold Coast Titans on Saturday, however the six day turnaround may be a factor as Newcastle look to bounce back from their 22-13 loss to the Dragons.

Tex Hoy is expected to miss at least two weeks with a hamstring injury, while Mann is highly unlikely to play.

In good news for the Knights, fullback Kalyn Ponga will return from injury after he had offseason surgery on a shoulder complaint that saw him miss last year’s State of Origin series.