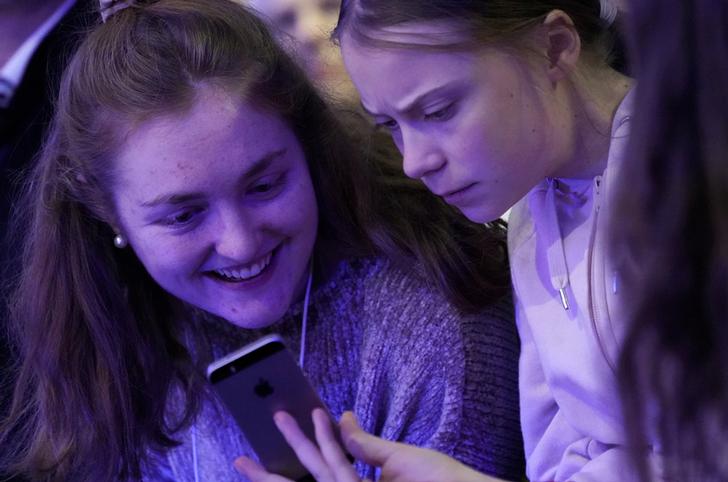 DAVOS, Switzerland (Reuters) – Often seen as the preserve of old, rich men, this year’s World Economic Forum has thrust around a dozen teenage “change-makers” to the top of its agenda, adding fresh voices, energy and fashion to proceedings.

The first panel of the four-day Alpine gathering made clear the shift from 81-year-old founder Klaus Schwab, with four young activists, including Sweden’s Greta Thunberg, discussing how to forge “A Sustainable Path towards a Common Future”.

The combined age of the panel, which included water, electricity and health activists from Zambia, Puerto Rico and Canada, was 64 — younger than many of those in the audience.

For Thunberg, now a familiar face globally, the transition from campaigner to participant has been rapid. A year ago she was leading protests at Davos as well as speaking, warning the world that “the house is on fire”.

This year she is taking part in several high-profile panels, including delivering a speech shortly after U.S. President Donald Trump spoke. Trump has ridiculed her in the past and glancingly referred to her as a “prophet of doom” on Tuesday.

Joining Thunberg among the ‘change-makers’ is Naomi Wadler, a 13-year-old anti-gun campaigner from the United States.

Wearing Doc Martens boots and chequered trousers, Wadler appeared entirely unfazed by her role as a Davos participant, saying she hoped to inspire as well as being inspired.

“I think it’s so great that we’re all invited… because this is something that hasn’t been done before,” Wadler, the youngest of the youth activists, told Reuters.

“The forum used to be made up of a lot of old, rich white men and so I think it’s really cool that we have so many people of color.”

Among ten ‘change-makers’ profiled by the World Economic Forum on its website were Mohamad Al Jounde, 18, a Syrian education campaigner; Autumn Peltier, a 15-year-old Canadian who focuses on water resources; and Ayakha Melithafa, a 17-year-old environmentalist from South Africa.

The buzz around the group was infectious. On one climate panel, Fahd al-Rasheed, a 42-year-old Saudi official, joked that he wanted to be grouped with all the young people this year.

The audience laughed, and Melithafa launched into an impassioned plea for more action on climate change.