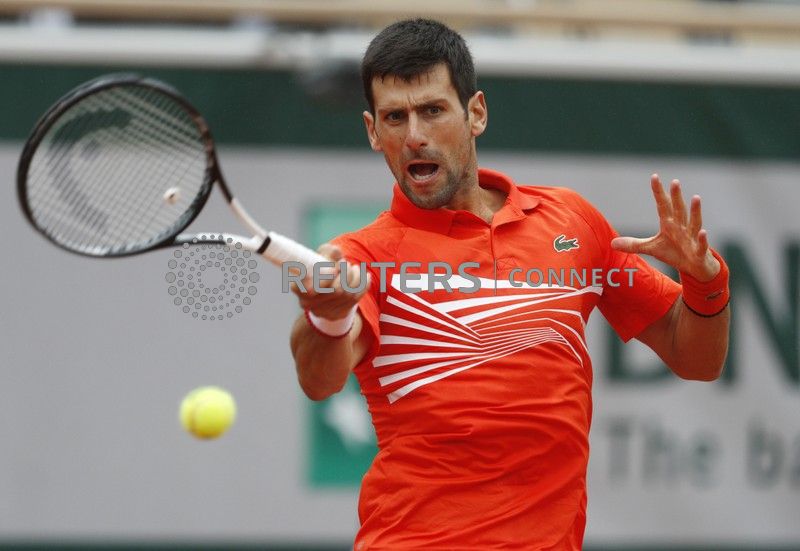 PARIS (Reuters) – Novak Djokovic is the favourite to win the French Open and become the second man ever to hold all four Grand Slam titles simultaneously on two separate occasions, according to Rod Laver, the man he is trying to match.

Laver achieved the feat in 1962 and 1969 with perfect calendar-year Grand Slams that no male player has achieved since, although Djokovic held all four, spanning consecutive years, when he claimed his first French Open title in 2016.

Serbian Djokovic reached the quarter-finals at Roland Garros on Monday with a straightforward win over Germany’s Jan-Lennard Struff and will replicate his 2016 feat if he goes on to lift the title.

The world number one and top seed has yet to drop a set and is on course for a likely title-decider against holder and 11-time French winner Rafael Nadal.

“I’m probably favouring Novak at the moment and then Rafa,” Australian great Laver, now 80, told reporters on Monday. “Then it goes down the line.”

Laver thinks that should Djokovic win the French he could go on to match his own calendar-year Grand Slam.

“I marvel at someone like Novak with his ability and his consistency,” Laver said. “The way he plays the game, he doesn’t go bang, bang, bang, ace, volleys. He wins every individual point from the baseline.

“He’s won all four at one time …so he’s already done that portion of it.

“He’s just won the Australian, if he wins here he’s on line to win the (calendar) Grand Slam. It’s a long way to go, he’s only got one so far. (The French) is probably, for him, the toughest because you’ve got so many players, whether it be Nadal or (Roger) Federer, you’ve got (Stan) Wawrinka that’s just come through a huge match.

“But there are so many good players out there that are playing on clay. (The French) is probably the toughest one for a player to win if they’re in line for winning a Grand Slam.”

Federer, back at the French Open after a three-year absence, has breezed through to the quarter-finals without dropping a set but Laver doubts that the 37-year-old can win the title, as he did 10 years ago.

The Swiss is in line to face Nadal in the semi-finals.

“He’s certainly in it and he’s certainly playing well but I don’t know if anyone has really pushed him yet,” Laver said.

“You only have to win seven matches; that’s all you have to do. You don’t have to win 128 of them.

“I think someone like Rafa is going to be tough if Roger and those two meet.”