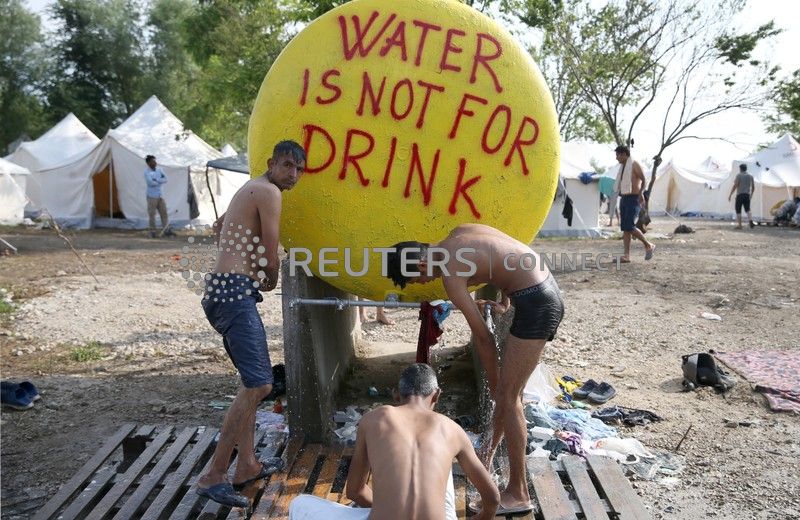 VUCJAK, Bosnia (Reuters) – Aid workers sounded the alarm on Wednesday about health and hygiene conditions in a makeshift forest camp in Bosnia for hundreds of migrants as they face the spread of scabies and other diseases as well as food shortages.

Over the past 10 days, municipal authorities in Bihac have moved up to 700 migrants from Asia and North Africa who had been sleeping rough in the town to an improvised tent settlement at a former landfill some 8 km (5 miles) from the Croatian border.

The Red Cross is the only relief agency providing hot meals and hygiene items to the migrants at the site at Vucjak and has erected about 50 tents so far as well as improvised quarantine arrangements for the sick.

The European Union and U.N. agencies have criticised sanitary conditions at the site, which they also say is located in an area still peppered with landmines left over from the 1990s wars in Bosnia.

“The health situation is alarming. Many people are already infected with scabies and there are other health problems too,” said Katarina Zoric, a spokeswoman for the International Federation of the Red Cross (IFRC).

Zoric said the Red Cross could provide only basic medical aid but said some people at the camp were reportedly suffering from tuberculosis and hepatitis. Some had been brought to the camp after surgery.

Bosnia, which is not an EU member and was largely bypassed by refugees and asylum seekers during Europe’s 2015 migrant crisis, has seen an increase in migrant arrivals since EU members Hungary, Slovenia and Croatia closed their borders.

More than 33,300 migrants have entered Bosnia since last year, of whom around 9,000 have settled in the Bihac area hoping to cross the border into Croatia and thence to western Europe.

The tents at Vucjak are pitched among piles of garbage and muddy pools following recent rainfall. The people used water from tanks to wash themselves in the scorching heat.

“This is a jungle camp,” said Mohammad Kamran Khan from Pakistan. “Every day I kill one snake, two snakes, or other animals (that pose a risk to the migrants).”

Zoric said the camp was running out of some food supplies and called for international aid.

The EU said on Tuesday it would provide 14.8 million euros (£13.3 million) to address the needs of migrants and refugees stranded in Bosnia.

The mayor of Bihac, Suhret Fazlic, said he hoped the EU would press state institutions, which are in charge of migration and asylum policies, to take responsibility for the migrants.

“Bihac was literally invaded by migrants,” Fazlic told Reuters, adding that the town of 50,000 had provided shelter for at least 5,000 people. He said he was not happy with the Vucjak site and stressed it was just a temporary transit centre.

“A migrant crisis, which is a global problem, cannot be solved in Bihac. It must be solved at the state level, at the regional level and in cooperation with the European Union.”

Police sent back to the camp on Wednesday three groups of people who had been found exhausted in the woods. Croatian police had returned them to Bosnia after they walked over a nearby mountain.

“The Croatian police beat us as if we were animals,” said Hasnen Arshad, 17, from Pakistan.

Arshad and other migrants also said the Croatian police had smashed their mobile phones and had taken money from them.