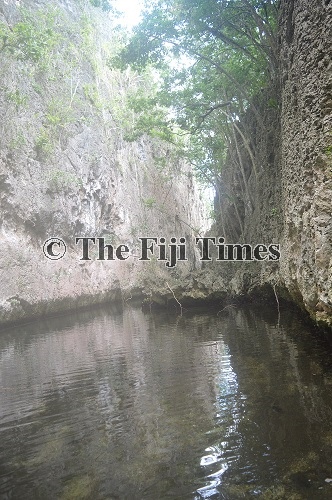 For a small coral and volcanic island, with a total land area of just 12 square miles, Vatulele is rich in history and legends.

Fondly accepted as the masi-making capital of Fiji, it is also home to many strange petroglyphs. These early rock paintings that date back 3000 years ago have attracted the interest of many scientists and research pupils.

One of the painted petroglyphs, a face with 12 “hairs”, is perhaps the most prominent rock paintings on the island’s limestone wall which locals call Bainivualiku.

But only a few hundred metres away from the site lies another wonder – cavernous rocks that have protected a stagnant pool for centuries. This is tobu ni ura buta or the pond of Vatulele’s famous red prawns.

Red prawns are not unusual to find in the world. But what makes Vatulele’s red prawns special is the unique story behind them.

From Ekubu, the island’s chiefly village, a 30-minute boat ride to the western part of the island takes you to a short sandbank that leads to Naura. Here you will spot the red-coloured petroglyphs scattered a few metres from the bottom of a limestone wall.

Walking to the south-western end of the dune, the sparkling shoreline gives way to a carpet of creepers and clusters of coastal shrubs and trees. Trekking through this area is the most challenging part of the trip to the pool of the red prawns.

Trees felled by the might of cyclone Harold lie submissively on the ground creating a maze of mangled trunks and tweaked branches.

“The belief is, if the spirits that reside here are impressed with a visitor, echoes of drums and murmurings would be heard as we approach the pond,” explained Tuimasi Tanoa, Ekubu Village’s headman.

According to an ancient story passed down through many generations, one of the first inhabitants known to set foot on the island was a beautiful female deity or vu yalewa.

The story of her divine beauty was recognized across the Fiji islands and among the coastal villages of Viti Levu.

Powerful male deities throughout the land made many aggressive attempts to have her as their bride. She was also pursued in earnest by mighty warriors but no male was ever able to sweep her off her feet.

As her name suggested (Cagi Bula means strong winds), she was very fair on the outside but possessed an arrogant heart and a stubborn mind. She refused every suitor that proposed to her.

“They would come with gifts and food to woo her but she scorned all of them,” said Ekubu elder, Jone Naisoro.

“She had a boisterous personality. She refused to give in.”

Meanwhile, in one of Nadroga/Navosa’s coastal villages, the ancestral vu from Votua Lalai (The Naviti Resort) had planned to attempt the impossible. He did not know what was in store for him.

He was handsome, privileged and had the heart of a lion. Hearing of Lewa ni Cagi Bula’s stubbornness made him more determined to get the Vatulele deity to be his bride.

He set off to the island of Vatulele to present his lucrative marriage offer and brought with him fine gifts including cooked giant red prawns gleaned from coastal streams by village women. The prawns were wrapped in via leaves, which were popular food containers and pitchers of water.

In those days, such a meal was a delicacy because prawns were found only in freshwater streams.

“According to the story, the suitor placed massive rocks in waters between Votua Lalai on Viti Levu and Vatulele. He walked across the deep sea by stepping on his bridge made of rocks,” Naisoro continued.

“A few of those rocks remain today and they include Vatu Lalai, Vatu Levu and Vatu Savu which are all in seas off the jointed villages of Ekubu and Taunovo.”

Other rocks remain on Votua Lalai and one is believed to have sunken off Vatulele and is today part of a submerged reef system.

Lewa ni Cagi Bula was not convinced and went into a fete of rage over the gifts brought by the charming deity from Viti Levu and intruder to the pristine island.

She ordered her helpers to throw the suitor off the cliff above Ganilau, a cave that once belonged to a famed mythical bird that lived on the island in ancient times.

While he fell over the cliff, the wrap of succulent red prawns slipped from his hands and fell into a rocky pool below.

Amazingly, the young man survived and later escaped back home to tell the story of his failed conquest.

“Once the prawns landed in the body of freshwater pool, they all came to life and continue to live in that same pool to this day,” said Joana Masau, a grandmother and masi-maker.

“The via leaf that was used to wrap the prawns fell beside the pool and developed into a small patch of wild via bush.”

If you ever visit Naura, the site of red prawns, you will find via growing along the rocky terrace.

Today, the red prawns occupy a sacred status among the islanders of Vatulele. No one is allowed to touch or remove them from the pond.

Ms Masau said nobody has ever taken the red prawns away from the island. A curse has associated this tabu and anyone guilty of stealing the red prawns will encounter bad weather and get shipwrecked.

Spotting the red crustaceans is easy to do at the first pond, which lies outside the cave. The other pool lies inside the cave and requires climbing through a gap on the limestone wall. This is a tricky place to manoeuvre and visitors to the pool often need assistance from local tour guides.

“The islanders treat the prawns with great respect, consider them sacred and are forbidden to kill or harm them in any way. Legend records that anyone who tries to take them away will suffer a shipwreck,” Wikipedia says.

Scientific explanations may not concur with the reasons given by islanders on the origins of the ura-buta (red prawns).

“Nevertheless, they remain fascinated by the environment in which the prawns live. Known as anchialine habitats, they are pools some distance away from the sea but which still maintain tidal influence.”

Linked with these anchialine pool is Vatulele’s network of caves and passages. Many believe spirits used to travel to and from Vatulevu in olden days using these secret cavernous passages.

“The traditional owners of the pond are from the village of Taunovo. Normally a priest accompanies visitors to the pond. The one who used to accompany guests to watch the red prawns on past occasions has passed away,” Tanoa said.

“He would usually use a sacred chant to call the prawns and the crustaceans would reveal themselves by floating to the surface.”

Hearing about Vatulele’s red prawns is one thing, observing them in the wild with your own pair of eyes and listening to islanders yarn about Lewa ni Cagi Bula is another story altogether.

While reading about Vatulele’s most famous legend can be pleasant to the eyes, travelling to the island, experiencing its beauty and living among locals is the best way to learn about the story.

n History being the subject it is, a group’s version of events may not be the same as that held by another group. When publishing one account, it is not our intention to cause division or to disrespect other oral traditions. Those with a different version can contact us so we can publish your account of history too — Editor.