Discovering Fiji: The skull and death of Ro Veidovi, Part 1 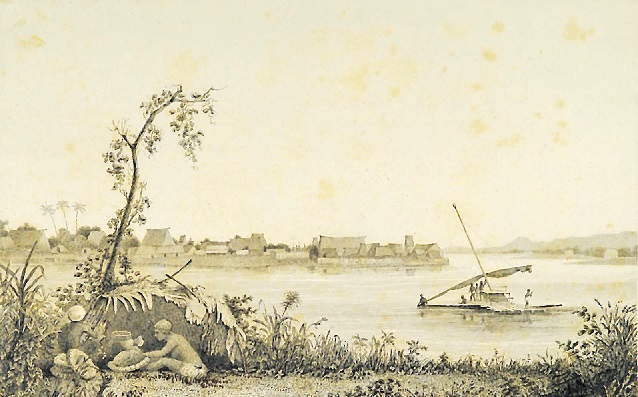 A drawing of Rewa in 1840 by Alfred T.Agate Picture: WWW.NAVY.MIL

In the first half of the 1800s, some American newspapers carried stories of sailors killed in Fiji.

These deaths were primarily caused by skirmishes with cannibal warriors and shipwrecks due to poor navigational charts of the largely unknown Pacific Ocean.

In response to these tragedies and their pressure on sea trade, one of the world’s most famous naval expeditions was authorised on May 18 1838 by the United States Congress.

Called the United States Exploring Expedition into the Pacifi c, it was tasked to explore trade opportunities here, among other reasons. Up to this time, the news about Fiji was largely through the writings of Wesleyan missionaries who started arriving in 1835. Aside from them, the only other group of people who really knew about Fiji and the Fijians were the Tongans.

They had traded with each other for generations. The exploring expedition sliced into Pacific waters from Peru in July 1839 under the command of a navy lieutenant Charles Wilkes.

Four ships (two joined later), including the fl agship Vincennes, were part of the naval expedition which included two naturalists, a linguist-ethnologist, a conchologist, a mineralogist, a horticulturist, a botanist and two artists.

Wilkes decided to anchor off Ovalau upon his arrival in Fiji on May 5 1840. This was because of its central location in the Fijian archipelago and the availability of an interpreter in American expatriate, David Whippy, who had arrived on Ovalau over a decade earlier. After Whippy’s close friend, Tui Levuka, gave his consent, the Americans took their tents and exploratory instruments ashore to set up camp.

“About twenty natives were employed…. the chief having agreed with each of them to make two fathoms of it…,” Wilkes wrote in his records on Fiji.

Levuka, Ovalau in the early 1840s was already a qali (affi liate) of Bau, a powerful chiefdom that was often used by foreign interests to establish themselves in Fiji.

When Wilkes and the expedition arrived in 1840, Tanoa was the reigning king of Bau. Tui Levuka, who was known to be friendly to Europeans, made arrangements for a meeting between the Americans and Tanoa, whom Wilkes described as “hairy, smallframed and about 65 years” old. “…his countenance was indicative of intelligence and shrewdness; his mind is said to be quite active….he speaks through his nose, or rather, as if he had lost his palate,” Wilkes further noted.

Wilkes’ meeting with Tanoa was to ask to persuade him to agree to the adoption of “rules and regulations for the intercourse with foreign vessels, similar to those established in Samoa”. Wilkes had originally planned to host a feast of rice-bread and molasses onboard the Vincennes to celebrate the signing but Tanoa’s party was too large to accommodate on board.

So the feast was held ashore instead. Tanoa returned on board the Vincennes for an informal visit the next day and Wilkes entertained the Bauan chief by showing him some fluid mercury before returning to business – of signing the previous day. Tanoa talked about his son, Seru, who later became Cakobau, the acclaimed Tui Viti.

Tanoa told Wilkes that if Seru ever met up with him, then Wilkes was to “give him plenty of advice”.

Later, Wilkes found the young Seru to be “young and frisky” just as his father had described him. One of Wilkes fi rst activities on Ovalau was to hike “to the top of Ovalau mountains”, said Roberta Sprague, the author of the paper The United States Exploring Expedition in Fiji. On the way to the summit, the Americans noticed Fijians who were part of the hike making leaf offerings beside the trail. The visitors grew surprised when told each offering was made where a man had been clubbed previously.

“I have seldom witnessed a party so helpless as ours appeared, in comparison with natives and white residents who ran over the rocks like goats,” Wilkes said. “Darkness overtook us before we reached the town; many of the natives, however, brought torches of dried coconut leaves to light us on our war, and we reached our respective ships without accident, though much fatigued.” Wilkes had learned through Whippy’s warnings that being unarmed in Fiji could invite an attack. Fijians were known to use treachery and vice as battle strategies.

As a result, the expedition’s commander instructed his offi cers to be armed every time they left the ship.

On May 16 1840, Wilkes ordered William Hudson, the commanding offi cer on the Peacock, to sail to the mainland and obtain the signature of the king and paramount chief of the Rewan chiefdom, Bau’s greatest enemy. The RokoTui Dreketi, Ro Banuve, had several very close relatives who exerted some form of challenge to the title.

Sprague noted they were Cokanauto, whom the Americans knew as Mr Philllips, Qaraniqio and Veidovi. The visitors were welcomed with a feast. But something peculiar happened as they spent the night at Roko Tui Dreketi’s bure. Sprague added that Hudson was surprised that one of Roko Tui Dreketi’s wives was “endeavouring to become his bedfellow”.

It was an “unexpected adventure” to Hudson, who was uninterested.

“Hudson tried to discourage her but she insisted she had been sent by the king, who would put her to death if she did not do as commanded. Hudson then protested to the king, who ordered her to depart,” Sprague said.

The next day, the Roko Tui Dreketi’s party went on board Peacock.

The Wesleyan missionary, Reverend David Cargill, was the translator during the treaty signing. There was an American-style celebration afterwards, including fi reworks, which exhibited “wonder and excitement” and incurred fear among the natives because they had never seen something like it before.

Hudson engaged Cokanauto (Mr Phillips) as translator and pilot during his stay in Rewa. Wilkes described him as “certainly one of the most intelligent natives I have met in all Polynesia…unfortunately he has not sufficient knowledge to distinguish between good and evil”. Phillips became closely associated with the Americans during their stay in Rewa.

They even stayed and dined at his house with much merrymaking. “They were apparently engaged in detailing and discussing the events that had taken place on board ship, and the narrative was constantly interrupted by jokes, laughter, expressions of astonishment and arguments leading to sharp words,” Wilkes noted.

But according to Fijian superstition, too much laughter and merry-making in the night was an omen of bad news. It just so happened that while the Peacock was anchored in Rewa waters, Hudson received a message from Wilkes to arrest one of Roko Tui Dreketi’s half-brothers – Ro Veidovi.

According to the web page, Naval History and Heritage Command, Patrick Connell, an Irish beachcomber who had settled on Viti Levu told Wilkes of a treacherous incident that occurred in Rewa in 1834.

The American merchant ship, Charles Doggett, had hired some locals to help in harvesting and curing beche-de-mer on Ono Island in Kadavu when a rumour began circulating among them that the ship contained valuable objects. “In order to obtain them, the local great chief, Vendovi, executed a plot against the ship’s crewmen working at the drying house, which resulted in the death of eight men. The ship’s captain forced the return of seven uneaten bodies, but was too late to prevent the consumption of the eighth,” the web page noted.

“On hearing Connell’s story, Wilkes sent him (Connell) to Rewa with a message for Captain Hudson to capture Vendovi.” Then, beche-de-mer fetched handsome prices in Asian markets and they were in abundance in Fiji waters. Another popular historical account put it this way, that Veidovi “masterminded the seizure of the American brig”, Charles Doggett, and “the murder of about ten of its crew members”.

While the unexpected crew of the bechede- mer ship where inside the bure, Ro Veidovi and his accomplices surrounded the house and set it on fire. Sprague said they clubbed the men as they escape from the fl ames. Charles Doggett’s mate and a boy had almost reached the ship’s boat when they too were struck down with clubs and spears.

The men who had remained on the ship brought her cannon out. The natives fl ed to a nearby cave to seek shelter so the ship managed to escape and was saved. Connell became the chief witness when Ro Veidovi was brought to “justice” for his crime. That made Ro Veidovi an American prisoner.

He was chained and shipped to the Americas, never to see his country and people ever again. History tells us that he died a few days after he arrived on American soil, possibly from pulmonary tuberculosis. His body was buried at a naval graveyard in Brooklyn, New York.

His head was saved and his skull was later tagged Specimen 292 and put in a restricted area of the Smithsonian Institution in Washington. It became the museum’s star attraction.

 Next week: The Skull and Death of Ro Veidovi Part 2

 History being the subject it is, a group’s version of events may not be the same as that held by another group. When publishing one account, it is not our intention to cause division or to disrespect other oral traditions. Those with a different version can contact us so we can publish your account of history too — Editor.