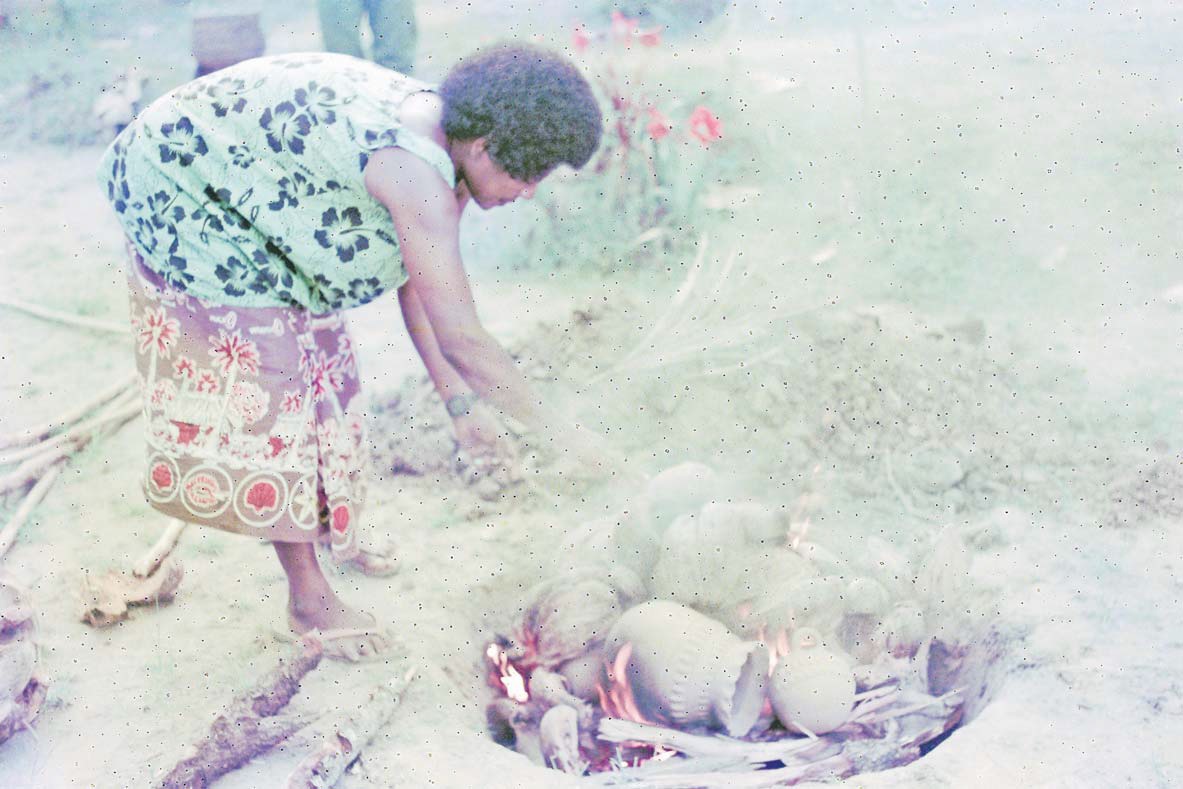 A long time ago, members of yavusa Vulagi who now reside in Nasilai Village on the Rewa Delta left their home.

The reason behind this early tribal migration was the outbreak of the deadly epidemic known as “matelila” or the wasting disease. It is believed they migrated from Bau.

This article takes a look at how they moved from Kiuva to Nasilai in Nakelo (Ucui Nasilai) before finally setting up at their current home. According to the late Sekove Tasoqosoqo (father of Taraivini Wati, the iconic potter from Nasilai Village discussed in last week’s story), after leaving Kiuva, his ancestors came across a headland at Nasilai, Nakelo. Tasoqosoqo talked about his people’s movement during a 1981 interview with Doctor Paul Geraghty, the Adjunct Associate Professor in Linguistics at the University of the South Pacific.

The interview was translated in English and recorded in an essay written by Geraghty titled “The Stone and the Paddle”. The headland at Nakelo did not belong to Tasoqosoqo’s people but they liked it because it was close to the reef and therefore, provided food protein in the form of fi sh and other seafood.

“We would sell the fish to the farmer who lived inland, such as at Nakelo, and so we became known by the name “Matua Edai” (Mature Today),” Tasoqosoqo noted. They got the name Matua Edai (matured today) because their ancestors could easily get root crops and other produce from those who lived inland by exchanging them with seafood from the coast.

The people of Vulagi stayed for a while until their population increased so Tui Nakelo gifted them some land, where food could be planted.

“Then one day, we fished a turtle and took it to the inland farmers to trade for food in villages such as Vaturua and some others,” Tasoqosoqo said. When the turtle was taken to Vaturua, people were wary of it because it had hands and was breathing like a human being. They passed this fi sh on to the chiefs of Nakelo.

“That’s when we became known, to this day as the “Gonedau Nakelo”, or traditional fi shers of the Tui Nakelo,” Tasoqosoqo continued.

“After that, we stayed there for a long time but the population was still increasing.” One day, Tasoqosoqo’s great-grandfather, Naibuka Ralevulevu, said he had to look for land to settle because their former home was running out of space.

“We came along the coast to Naivilaca, kept on poling through the passage between Nasoata and Sagasaga, followed along the coast of Baravilevu (now an island in the mouth of the Ekai Bucona), this is before it was all mangrove swamp as it is today,” Tasoqosoqo told Geraghty.

The group sailed up the river, passed the village of Drekena and later anchored at a place where the foundation of the first house, known as Nakoro, was built. They stayed for a while before Ralevulevu decided to move again in search of new land, ultimately settling down at Nasilai.

The current site of Nasilai Village belonged to the mataqali of Nakuru from nearby Drekena. When the people of Vulagi reached Nasilai, they already had with them great traditional knowledge and skills passed down many generations before them. Nasilai is located on the Ekai Bucona River, a tributary of the Rewa River.

It lies east of Nabua, the village of traditional sailors of Tongan origin and west of Drekena, one of the villagers belonging to the Kai Burenivalu, the original inhabitants of Rewa.

The people of Nasilai in Rewa are related to the people of Nasilai in Nakelo, Tailevu, the latter being the original “Nasilai”. This is evidenced from both oral tradition and analysis of the place name. According to Geraghty, the name Nasilai consists of na meaning “the” and sila meaning “to protrude, plus a nomilising suffi x, and simply means “the headland”. The tribe to which the people of the two villages called Nasilai belong to is called Vulagi, literally meaning “strangers” or visitors”, reflecting they were probably seminomadic. Today, the women of Nasilai are traditional potters while the men are traditional fishers. In the olden days, they specialised in turtle-fishing.

The Roko Tui Dreketi, the high chief of Rewa regularly called upon the fishermen of Nasilai to catch turtles for grand occasions only. At times he’d request for waibuta (kabatia and kinikini) Dr Geraghty said this division of labour where women were potters and men were turtle-fishers is present in some villagers in the east of Fiji. In the past, making clay earthenware in Nasilai was not only a tedious household chore for a woman but a traditional obligation that demonstrated the indelible importance of women in olden day Fiji.

In some parts of the islands, girls who reached puberty were required to design their first pot. This pot was her passage of right. Her finished piece declared she was a woman ready to take up her special place in society. Women made a range of ceramic cooking pots called kuro or water jars called saqa, using a process called tulituli.

Some served a decorative purpose. For centuries, pots were the mainstay art of the women of Nasilai. The mua-i- rua, which ethnographer Rosa Rossitto, described as a half-moon in her 1995 research, was one of their speciality pieces. It was a drinking vessel made for the Roko Tui Dreketi.

It was a crescent-shaped pot with a small round opening and a circular fl at base.

Ceramic ports were also items of trade. “A potter’s creation is more than an artefact of clay,” said 70-year-old Veniana Maraia Paulina during an earlier interview with The Sunday Times.

“It holds a spiritual meaning. It captures a woman’s journey in life, who she is and where she came from.”

Clay was extracted (called qeti) from its natural pit in considerable amounts and stored in the home for up to a year. It was watered daily to retain its moisture. To reach the best consistency, everything from twigs and leaves to root hairs and pebbles was removed through a laborious gleaning process.

“If you don’t prepare your clay well your pot will later break up,” Paulina said. Using a smooth stone and a wooden paddle called tata, the potter gave the pot more volume and depth by slapping the clay between the stone and tata. Both tools had to be moistened with water regularly.

Tulituli was done while the pot sat on its special woven stand called toqi. She kneaded her clay to get the right texture before rolling it on the fl oor and adding a new layer to the ballooning pot until it reached the required height. At this point, the mouthpiece was shaped out and added. “Clay pots were our iyau (item of value).

They were exchanged between vanua and chiefdoms,” she said. “They were also given as gifts to our high chiefs or women of status and special ceremonies were held to mark their production.”

During special occasions, the women of Nasilai visited their paramount chief, the Roko Tui Dreketi, by presenting hundreds of clay pots (tuva saqa).

They also took special seafood like kabatia and kinikini. In some parts of Fiji, pots that were required for special occasions were accompanied by age-old rituals.

During such events, which include temple worship honouring the guest of a chief of a village women made pots through the traditional group work called solesolevaki.

Women also had to observe various “tabu”. They had to stay away from their husbands or abstained from certain foods or activities. Pregnant women were not allowed to take part. They were believed to bring bad omen. “Potters used the kanukanu (exterior decorative designs) to tell stories, There were also motifs and designs that were specific to a particular region of the district,” Paulina added.

“Just by looking at the designs on the body of a saqa, you’d know where the pot was made and the story behind it.”

Dr Geraghty said “it is impossible to date the founding of Nasilai”, however, he said it would predictably be before 1827. Today, the tradition of making clay pots continues in Nasilai.

Among those who work hard to produce it include Wati’s close relatives – her younger sister, Paulina, and her son, Apenisa Bainivalu, who partners with his wife to produce some of the biggest and most elaborate jars to be made in modern-day Fiji.

Tasoqosoqo and Ralevulevu may have long gone but their people pottering skills live on. This article was written using information from Dr Paul Geraghty’s Essay: “The Paddle and the Stone: Taraivini Wati and the Stranger Potters of Nasilai.”

History being the subject it is, a group’s version of events may not be the same as that held by another group. When publishing one account, it is not our intention to cause division or to disrespect other oral traditions. Those with a different version can contact us so we can publish your account of history too — Editor.