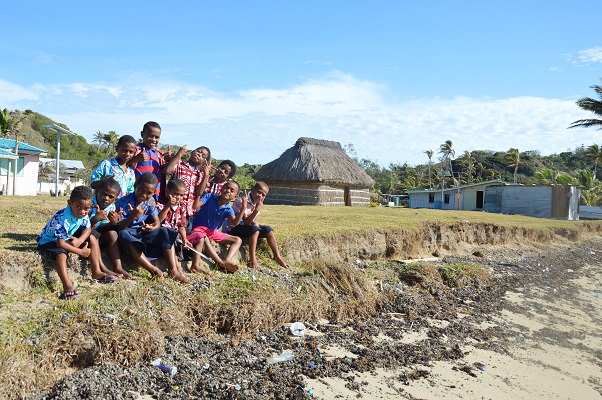 Children of various villages in Yasawa during a recent Government tour. The sea has been claiming most of the villages beachfront. Picture: LUKE RAWALAI

I was not quite the stranger in Yasawa I had initially thought, for the ancestors of the Yasawa people had contacts with our ancestors in Cakaudrove, Bua and Macuata developing special ties.

They had preserved these relationships through the passage of time, knowing their traditional allies and foes, while I was considered a foe during the yaqona bouts and the full wrath of my tauvu receiving the full bilo (cup) of yaqona against my wishes.

As a first time traveller to the village of Teci, Yasawa-i-Rara, the Northern most island of the Yasawa group, I was taken aback by the remoteness of the island.

The thought that the early settlers from whom the current day villagers originated from had decided to make the island their home was beyond me considering that it sat in Fiji’s cyclone paths.

This meant that the people of Teci were not spared from cyclones that hit the Fiji Group.

Teci Village elder Inosa Waqatabu says his people have been nicknamed ‘luveni cagilaba (children of cyclones)’ over the years because they were hit by almost every cyclone that has affected Fiji in the past.

Mr Waqatabu shared about a singing band on the island known as Bouwaqa ni Gauna Lagilagi which derived its name from the yavu or ancestral site of the only clan in the village named Bouwaqa.

The history of the singing band is another story for another day, but rummaging through Native Land Commission records during my return from a short trip to the island recently, I came across the history of the people of Teci who are members of the Bouwaqa clan considered an independent polity from time immemorial.

Native Land Commission records disposed by village elders state that their original ancestor was Savase, who came from Nakauvadra in Ra.

On his arrival at Yasawa-i-Rara, Savase settled at Korokoro, Vivau, near the present village of Teci and from there in moved to Bouwaqa on the edge of present Teci Village site.

Savase had three sons of whom the two eldest remained at Bouwaqa and the youngest went to establish a new settlement at Dalomo.

The ancestors of the present day Teci people then installed the great-grandson of Savase as a  leader with the title of Tui Teci which still exists in the village to this day.

He was independent and did not heed the authority of anyone else on Yasawa-i-Rara.

As they increased in number at Bouwaqa, the people of Teci spread uniting with people of neighbouring Dalomo Village while strangers that arrived later in the village were given land by the Bouwaqa people and presumably included in the yavusa.

Two of the leading chiefs of the Bouwaqa married women from Bila, Tavua, suggesting some established connection with Tavua, perhaps through the arrival of some Tavua people who settled at Teci.

Also, one of the divisions of the mataqali is called Nadua, suggesting an origin either from Yaqeta or from Votua, Ba.

Oral history states that at a time the people of Macuata on Vanua Levu journeyed to Yasawa to help the people at Teci during a war with the people of Yasawa-i-Rara where they were defeated.

The people of Viwa came to assist Joni Cakautavatava, the Tui Yasawa, with whom they were related and was Tui Yasawa at the time of the NLC enquiry.

Apart from the spirit of Savase, the Bouwaqa people had a nitu or guardian spirit called Mateanitani whose place was at Nakorodamu on the peak overlooking Bukama and Teci and this was also the place of the nitu of the Bukama people.

The kai or tree was the balawa, either the screwpine or the wild pineapple. The ika or fish was the galau or kawakawa, the grouper.

Over the years the people of Bouwaqa have had a lot of interrelationships with outside influences and one of them was their relation with the people of Vanua Levu specifically Macuata who aided them in war during a quarrel between the people of Teci and the people of Yasawa-i-Rara.

Interestingly their foes from Yasawa-i-Rara acquired the assistance of Tui Bua.

The Macuata party led by Gigi of Galoa while on their way to Teci, were passing the Naivaka peninsula just west of the island of Galoa in Lekutu, Bua, towards the west end of Vanua Levu, when they met and drove away from the Tui Bua’s party on its way to Yasawa.

However, both parties reached their destinations and Tui Bua was able to warn the Yasawa people that the Macuata party were approaching and that they should put up their defences.

The Teci and Macuata people advanced on Yasawa-i-Rara and laid siege to the village.

Meanwhile, Tui Bua, who was in the village, sent a party of five to Bua to say that in the event of his death his wives were not to be strangled.

On their return, the messengers were caught at sea by the besiegers and killed.

The siege lasted for six months, but miraculously the Tui Bua and the people of Yasawa-i-Rara won the war.

The people of Yasawa-i-Rara use to visit the people of Bua and became connected with them through intermarriage but they never had a qali or tributary relationship with Bua.

Three months later, Tui Bua returned to Yasawa i rara for the magiti ni valu or feast of thanks for his military assistance right in the eve of waging war between the people of Matacawalevu and Nacula.

There are other records of wars and quarrels that the Bouwaqa people of Teci were involved in due to the never-ending disputes between them and their neighbours of Yasawa-i-Rara is evidence of their active participation in the politics of Yasawa-i-Rara.

Apart from the rich history of the people of Teci the island of Yasawa-i-Rara has interesting historical sites dipped in legends.

One such site is the Sawa-i-Lau Caves owned by the people of Nabukeru.

n History being the subject it is, a group’s version of events may not be the same as that held by another group. When publishing one account, it is not our intention to cause division or to disrespect other oral traditions. Those with a different version can contact us so we can publish your account of history too — Editor.