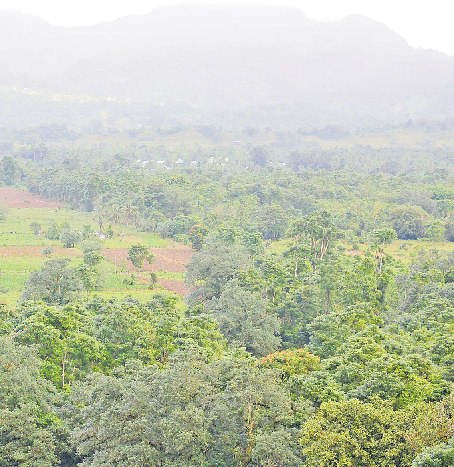 The farming valley in Serea, Naitasiri that was used to grow bananas and other lucrative commodities. Picture: JOVESA NAISUA

Each time you travel past Wainadoi, on your way to Navua and beyond, you would most probably see a few lines of mysterious-looking trees that spring out of a patchwork of grass and shrubs prolific in rainy parts of Viti Levu.

What will normally strike you is the perfect line they make and the uniformed spaces between them, apart from their whitish trunks and the scanty leaves that grow on their branches. While the idle and old-looking plants stand silently in the background, homes squeeze closer to the Queen’s Highway, some points on which, roadside stalls selling fruits, flowers and vegetable stand.

In the early colonial days, the trees would have been the centre of attention and many farmers and labourers would be seen bending in the fields, attending to them. What I am talking about is the patch of Wainadoi’s ageing rubber trees, tropical plants of the spurge family whose milky liquid called latex will ooze from any wound made to the tree bark.

The latex generally contains 30 per cent rubber, which can be processed into fl exible and solid products like pencil erasers and tyres.

To think that Fiji had a rubbery “industry” can be a bit unsettling but such was the aggressive stance by British authorities and settlers. They experimented on a wide range of agricultural commodities that could earn revenue and create wealth for the colony. Fiji, as a result, was involved in cotton, sugarcane, banana, cocoa, rubber, pineapple and copra, from as early as the 1800s. In an attempt to discover something about the early and now-dead rubber industry, The Sunday Times team travelled to a few colonial farms in Serea, Naitasiri, following the dusty Sawani-Serea road that starts from the Adi Cakobau School-end of the Waimanu River. With no existing rubber farmer in the area to consult, the trip was a bumpy wild goose chase from the start.

Attempting to write a story on an industry that never really made it and had gone extinct even before independence was going to be a challenge. To supplement the lack of information from current Serea residents, I read dozens of online literature and came across something that was published in the 1870s. It seemed to suggest that even before rubber was experimented as a potential commercial commodity, some rubber varieties grew in wildly in Fiji.

“Several varieties of rubber grow wild in Fiji, but it was not until 1907 that the industry was placed on a commercial basis…,” one 1912 newspaper article noted. Another literature said as early as the 1870s, Fiji “wild” rubber was being tested for its viability and quality. It added that the plants that rubber was ob- tained from “was very common in the islands”.

In the Bulletin of Miscellaneous Information (Royal Botanic Gardens, Kew) Vol. 1898, No. 139 (Jul., 1898, pp. 164- 166), an article on “A Fiji India Rubber” purported that in 1877 a specimen of native caoutchouc had been received from Sir Arthur Gordon, Governor of Fiji. The rubber was favourably reported at the time and optimistically described as a “strong elastic, pure rubber of the same character as the higher grades of African rubber. If free from water admixture and impurity the value was said to be 1s 6d per pound.” By the time the bulletin was published 21 years later (1898) the price of the same Fiji rubber was estimated at “probably 2s or 2s 6d per pound”. “After so promising a beginning it was hoped that a successful rubber industry would be established in Fiji archipelago.

So far, however, this expectation has not been realised,” the 1898 article said. In 1878, a John Horne, F.L.S., the director of the Botanic Gardens at Mauritius, was understood to have visited Fiji and paid his attention to the Colony’s economic resources. Horne’s report on “Year in Fiji” (London, Standford, 1881) the Appendix noted that: “When wounded a thin milk-white juice exudes which yields a small quantity of caoutchouc”. This was known locally as “kau drega” or “talotalo”. Horne spoke of it as “decidedly our best rubber-yielding tree” and added that “it grows to a large size”. “Those that I saw were up to 18 inches or so feet through at the base. It is found scattered in the forest on the hills and valleys, but is not gregarious,” Horne’s report added.

In those days, the native name for caoutchouc was “drega” a n d the term “drega kau” was generally applied to all trees that had a milky juice. At Serea, now popular for dalo planting, The Sunday Times visited one of the very few remaining farms at Naisole II that still had standing rubber trees. Rueli Koroi, 66, who claimed to own a 35-acre piece of land, has over 100 rubber plants still standing on his plot, a reminder of the Colony’s rubber experiments and the insatiable quest to grow the empire’s wealth in the late 19th and early 20th centuries. “I inherited this parcel of land from my dad. These rubber trees have been around from as far as I can remember,” Koroi said.

He said the aged trees were remnants of an old industry and were now “useless and a hindrance”. “My father told me the Indians, Solomon Islanders and some iTaukei people used to work on these rubber plantations during girmit years.” He said a rubber factory used to be located not far from where the trees now stood.

Mr Koroi said rubber collected from the trees during the colonial days was sent to Britain for the manufacture of tyres. “You can still see etches in the trees where they were cut to collect all the “white blood” rubber. A jug was placed at the end of the spiral cuts to collect the residue.” Like Koroi, dalo and dairy farmer, Leveni Tuidina of Serea Village, would like to see all standing rubber trees cut down so that he could have more farming space. Tuidina believes it would be expensive to start a new rubber factory again hence it would be wise for authorities to cut down and destroy them. Despite the fact that the two Serea farmers volunteered to talk to The Sunday Times, nobody really knew how rubber farming worked back then and the type of labour is involved. Fortunately, I found some answers on the website www. digitalcommonwealth.org under a title “Collecting the latex on a rubber plantation in the Fiji Islands”.

The website had a photo of a labourer harvesting latex from rubber trees in an unknown Fiji plantation. The photo was captioned: “Collecting the latex on a rubber plantation in the Fiji Islands. This native workman is collecting latex (sap) from which comes the rubber we use. The rubber grows from a seed.”

Fiji trees were not tapped until they were eight years old. After that, they could be tapped annually for up to fi fty years. During tapping, latex fl owed from the inner bark of the rubber tree after it was gashed.

The workman usually emptied the liquid from the cup into his pail and carried it to the collecting station.

Next, the rubber was extracted from the latex. Some manufacturers mixed with the latex an acid which caused the rubber to curdle and rise to the surface in a thick set.

The sheet was then put through rollers, which pressed out the liquid, resulting in try rubber.

 History being the subject it is, a group’s version of events may not be the same as that held by another group. When publishing one account, it is not our intention to cause division or to disrespect other oral traditions. Those with a different version can contact us so we can publish your account of history too — Editor.