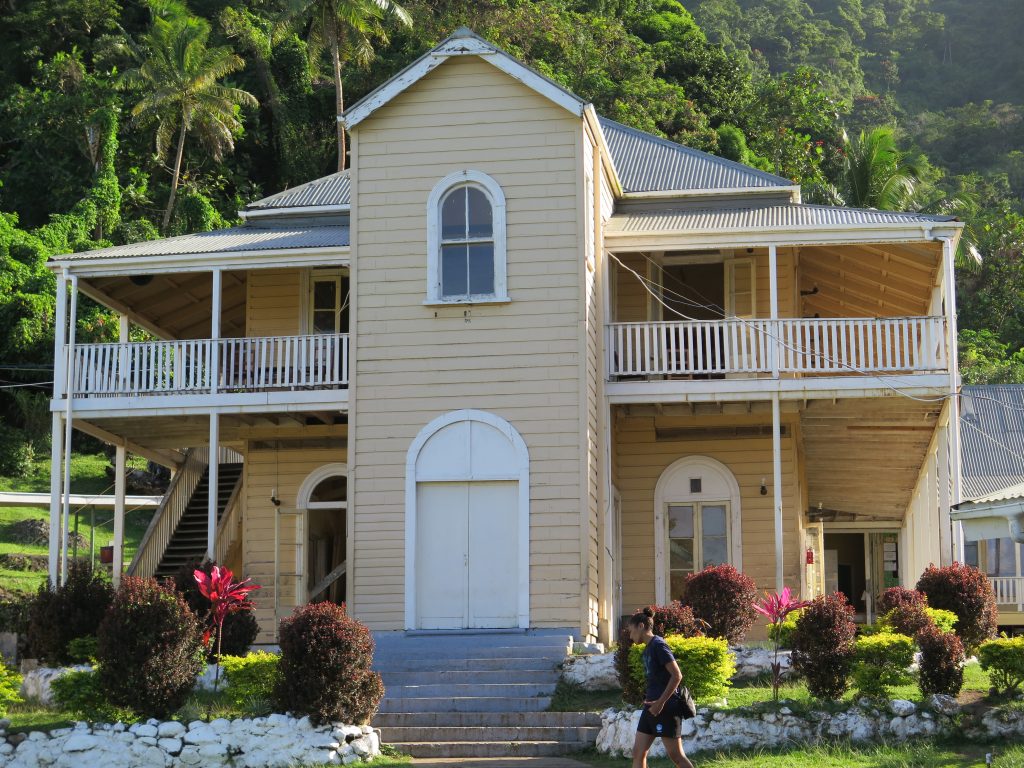 A close-up shot of the two storey school block at LPS. Picture: FIJIGUIDE.COM

On Tuesday, September 2, 1879, excited boys and girls of Levuka, walked through the corridors of the town’s first public school.

Although there were only 58 students, compared to the high number of today’s admissions, the group were pioneers of Fiji.

They were the first lot to go through the elementary stage of the country’s education system, which today has blossomed and churned out citizens and institutions that rank as the best in the region The Levuka Common School as it was first known was set up through the Public Schools Ordinance of 1879.

It played a huge role in the development of the town and also infused colour and feeling to the old capital and its array of activities, people and physical structures.

For a school fee of one shilling a week (sixpence weekly for other children in the family) the school supplemented and enhanced the basic education already offered at the time by European missionaries based in Fiji’s rural areas.

The Levuka School Board decided that the school’s headmaster position had to be someone whose wife could also teach. The couple was paid 450 pounds a year.

The Board also had to annually fork out 120 pounds for rent, 70 pounds for furniture and 50 pounds for incidentals – a budget of 750 pounds a year, with the remaining expenses to be footed by government.

Thomas Bonynge and his wife arrived from Wagga Wagga, New South Wales to be the first teachers. School hours were from 9am to noon, then from 2pm to 4pm. Subjects were very basic. On day one of school, The Fiji Times, then a 10-year-old newspaper, noted the following: “Mr Bonynge expresses unqualified gratification with the appearance and style of his pupils and he thinks he has admirable material to work with.”

And admirable they were, many being the children of Levuka’s crème de la creme, who would later earn a special place in Fiji’s history.

By the end of 1879, the lease of the Oldfellows Hall had expired so the school temporarily used the Mechanics Institute, where the town folks had their balls, plays, entertainment and other social events.

In its search for a lasting home, the Board eyed two pieces of land – one on the south of Totogo Creek and one near Niukabe Hill, today the site of the European War Memorial.

The former site was chosen “in accordance with the decision arrived at by ratepayers”.

Construction started almost immediately and got completed in July 1881, its design decided through a drawing competition won by G.W.Moore and brought to life by McGregor & Milne for 975 pounds. Though it has undergone changes throughout its lifetime, the school’s two-storey structure still stands today.

Meanwhile, around this time, missionaries were busy looking after their missions on Ovalau, often in an environment steeped in conflict.

Because of the competition to lure local converts, the rivalry between the Methodists and Catholics grew.

The Church of England was also in first churches’ race, later opting to target the descendants of Melanesians who came during the height of blackbirding in the Pacific.

However, in 1858, some form of truce was reached with the signing of the Freedom of Religion Agreement between Commander Lebris of the French warship and Cakobau.

The treaty was to protect new Catholics from being persecuted by those who chose to follow the dominant Wesleyan faith.

Six years before the agreement, the Wesleyan missionaries had established themselves at the Mission Hill area, slightly above Nasau Park, the site of an old village.

The first Wesleyan mission school and the first school in Fiji was formed here in 1852 by names such as Joseph Waterhouse and Reverend John Binner.

In a correspondence by Waterhouse, where he sought support for the Wesleyan Mission’s work  on education, he urged the reader passionateabout religious education to “Go to Feejee and behold the training of the infant”.

“..His lips rubbed with human flesh in order that a taste for such food may be excited and early acquired. Of the boy, playing with dead human bodies as toys. Of the youth, aiming his poisoned arrows at the eyes of a captive lad or lass and making the body of the little suffering innocent his target! Does not your heart pity poor Feejee?”

Led by one of the first settlers on Ovalau, David Whippy, a group of white men built Fiji’s first school on Mission Hill.

Waterhouse was unable to carry out his work in Bau because of the enmity with Ratu Cakobau.

According to Stanley Brown in “Men from Under the Sky”, he began teaching at the school attended by eighty children of “mixed Fijian and European blood”.

Of the school roll, Whippy’s household made up a huge portion of pupils. His nine children attended
the school as well as other children he looked after, some of them orphans.

“Once the school was running satisfactorily, the mission sent out a trained teacher, Rev John Binner,” Brown noted, describing the success as “one small, peaceful achievement in Levuka”.

That school transformed over the years and today have branches in Delana Methodist primary and high schools.

While Methodists chose the town to build their school, the Catholics scouted the outskirts of Levuka, where there was plenty of space and more of nature.

According to St John’s College Cawaci literature, an all-boys school was opened at Loreto (Tokou Village) in 1886 followed soon after by a girl’s boarding school.

Here students were taught by sisters belonging to the Third Order of Mary (TORM) who had arrived
in Levuka in 1882 and used school buildings erected by Father Marion.

In 1894, St John’s College was opened at Cawaci, which in early years was used to educate sons of Fijian chiefs from both Catholic and non-Catholic backgrounds.

The early school started with 12 students who were taught by Marist Brothers teachers.

Later in 1897, a school for Fijian girls was established in Cawaci run by Marist sisters – Mother Melanie,
Sister Isabelle and Sister Marie-Joseph.

The Marist Convent School started in the town in 1892, shortly after the fi rst Marist Sisters arrived.

At the northern end of Levuka, the Anglicans later erected their own school, today called St James Anglican Primary School.

Jones, though unorthodox in his teaching methods, was revolutionary in his approach and took  the school’s education portfolio and curriculum to greater heights.

He eventually spent 36 years in Levuka and passed away in 1930.

He did not live long enough to see the school grow in size, in fact too big that it had to be divide into two separate primary and secondary schools in 1973.

Today, a road named after him still remains, as are the many school buildings that were once the pride of the colony and the nurturing grounds of many Fiji greats.

A careful look at the school’s rolls in its first 100 years shows the recurrence of names of families associated with the development and welfare of Fiji. The list runs endlessly.

“The list of LPS old boys and girls who have gained prominence in almost aspect of national life….would not complete the picture of the contribution which the school has made to Fiji,” notes Sir Len Usher in Levuka School Century.

And so too have other faith-based schools of the old capital that sprung up during colonial times and continue to shine and educate the children of 21st century Fijians.

Though many schools in other urban centres around the country today have something to brag about, the centenarians of Levuka possess a special type of charm.

For Levuka possesses its own peculiar magic, characterised by its quaint buildings and narrow streets, where every turn leads to discovering a piece of Fiji’s history that only the special town and its people are able to tell.