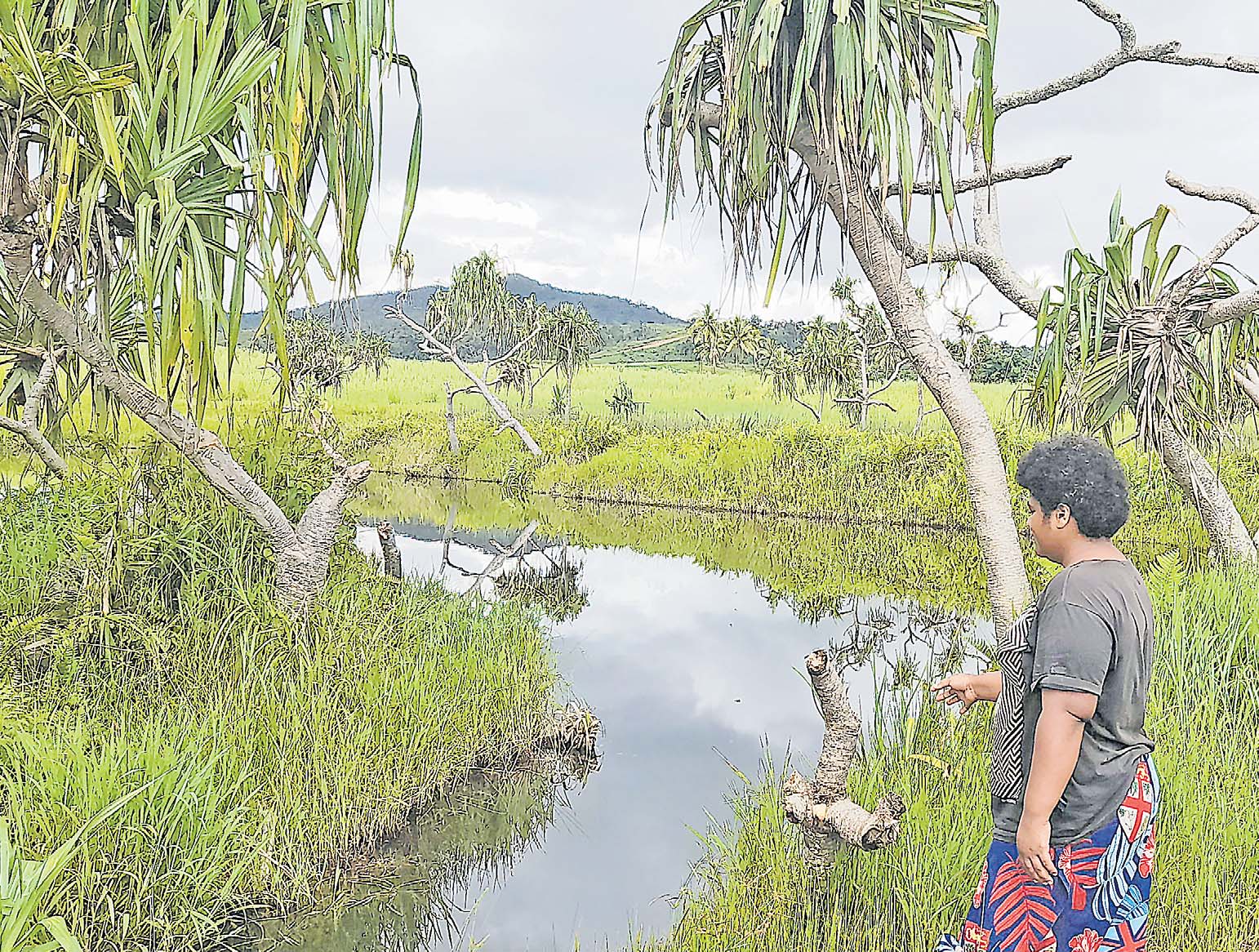 Close to 45 kilometres Northeast of Labasa, the hometown of the Babasiga Lions, the meandering road took me across unkempt tramlines, roadside mud pools and sprawling cane fields.

In no time I was in the middle of nowhere, and everything seemed slow, strange and consumed by silence.

All I felt was this — each dashing kilometre was taking me closer to the pointed tip of Vanua Levu called Udu Point.

When I started from town that day, the weather was dry and sizzling hot.

In a little over an hour, it turned wet and cloudy.

“Climate change for you!” said Shalend, my driver for the day.

I realised instantly I had lost the perfect sunshine I saw kissing the skies since sunrise at Vakamasisuasua.

I never gave up hope, knowing the sun had the habit of emerging from the clouds unexpectedly.

Off a gravelly road from a signboard that read ‘Wainidrua Village’, after spending almost two hours inside a Toyota Hilux 4WD, we grinded to a sudden halt outside what looked like a sugarcane farm.

“The floating island is somewhere in the sugarcane fields,” Shalend said.

I left Labasa with an insatiable quest to find the mystic lake that enveloped the floating island.

Discovering it in a cane field was never my dream.

In a few seconds, Shalend managed to reduce the appeal of the place from sound to plain and then to uninteresting.

“The floating island is in the sugarcane fields,” he said for the second time.

I realised there was no village close by, just a wooden house at a road junction in the middle of nowhere.

A few minutes later, I stood next to a giant of a man, the owner of the house in one of Fiji’s most rustic places.

He was gentle and concerned, although he wore a face that looked unfriendly.

I verbally gave away a few things he needed to know about me and declared my interest in his backyard.

“Go to Wainidrua Village and see a man there by the name Ilibani Rova,” he said.

The floating island is one of Macuata’s natural wonders.

People travel there in droves during the holidays to experience the “ride” and take photographs for memory’s sake.

“Some go there to pray,” said Shalend, “they say the place has supernatural powers.”

For me, there was no way I was going to bypass traditional protocol, even if the place was good for embracing my spirituality.

The land has eyes and ears, I told myself.

Three floating islands replete with its cargo of pandanus plants, ferns and grass used to drift inside the lake.

Those were the days when our ancestors were carving territories by busy killing each other half-nude.

Today, only one floating isle can be seen submerged freely in the lake.

Legend has it that the floating islands were once used by ancestral gods for long distance travelling.

While supernatural beings in other cultures used carpets and brooms to travel, according to story books, the gods of the vanua of Nubu used waqa qele or earthen boats.

“You will not get hurt. You will be safe and you will see the island move,” Mr Rova said while giving me his blessings.

“You came to the right place. Our mataqali owns the land where that waqa qele is. We thank you for following the right channel.”

I later heard that some locals in the area had been charging people money to visit the pond.

Mr Rova, is the turaga ni mataqali of Bukawaqa, a part of the yavusa Kedekede.

He instructed two of his daughters to be tour guides.

They called me tau.

I didn’t know why!

From a distance, the floating island looked inexplicably quaint, being the only spot in the vast green cane fields that had pandanus plants thriving on it.

You would expect pandanus plants to grow along the sandy coast but when you spot it in the interior, it often signifies a sacred spot steeped in Fijian mythology like Nakauvadra and Balawaviriki.

Pandanus is a tropical shrub with a twisted and branched stem.

The fibre from the leaves of the pandanus, are often woven into material for roofing and mats.

In Labasa, it is the suluka (tobacco wrapper) of choice.

There is nothing special about floating islands in general.

But the story behind Macuata’s buoyant isles is unique in the world.

According to legends passed down to Mr Rova, in olden times the lake was connected to the open sea through a mysterious river passage that only the ancestral gods mastered well.

“This water highway allowed free superior movement of the kalou vu and people of Nubu on the three waqa qele, to and away from here,” he said.

The earth boats served as vessels for ancestors of the people of Nubu, which they used to travel in while trading, going on fishing safaris and waging war against enemy tribes.

As was the river, the boats themselves were magical.

Unlike the majestic wooden canoes made of vesi hardwood, they were asymmetrical carpets of thick kuta, a special kind of reeds which grow around lakes and wetlands.

When harvested, dried, flattened and woven, it becomes valuable material for mats and garments used in raditional wedding attires and other handicrafts synonymous with the people of Macuata and Bua.

The three islets were supposedly gifted by the gods to the people of Nubu.

While most people have now forgotten the names of the other two islands only a few know the existing one’s name – Vanalato a word that loosely translates to ‘mast or vana made from lato or pandanus three.

The mighty drua had sails designed by women from intricately woven pandanus leaves.

On the other hand, the floating islands used their standing pandanus plants and umbrella-shaped foliage to catch the wing.

Mr Rova said before the arrival of Christianity the floating islands were manoeuvred using special chants that were only hummed by priests or bete.

The mystic islands only understood the Nubu dialect and would only move when the chants were chorused in the local tongue.

This was the only tabu.

Today, there are restrictions and any language can be spoken.

“The lake is extremely deep. Its bottom is believed to be out in the deep ocean,” Mr Rova said.

“Our ancestors used to find mangrove leaves and rays in the lake, showing its connection to the sea.”

The demise of the two floating islands and the imprisonment of Vanalato developed after a conflict developed in the area.

Mr Rova said the ease of movement of ancestral gods and the people on the magical earthen boat made the people of Nubu very outstanding and powerful.

“As a result, other tribal gods who resided at the mouth of the river had their hearts stirred by envy and covetousness. They wanted to own one and they made their desires known.”

But the people of Nubu refused to give up the islands because they were sacred gifts from their gods.

So the gods at the river mouth decided to take vengeance on the people of Nubu.

They planted kuta reeds across the river way to block the passage used daily by the earth boats from the interior of Vanua Levu.

To this day the river way is marked by a field of kuta reed which stretches away from the lake in all directions.

Whenever it rains heavily, the dry land around the lake will fill up with water, perhaps proving it was once part of a water highway that spanned all the way to sea.

Engrossed in excitement, I lost my usual awareness of the natural environment and balance, and fell into the swampy portions of the marshland, barely a metre or two from the edge of the bottomless lake.

I had crossed rivers, traversed deep seas and climbed mountains to get stories for Discovering Fiji but this a tough in its own simple way.

Drenched, I watched the floating island subtly move at one end.

Just being there to capture that single moment of movement on my phone was worth the travel.

“If today was windy, we’d be able to get on board and go for a ride.”

“We believe small eels at the bottom of the island propel the waqa qele and make it move faster.”

The thought of going for a ride tempted me.

But should I really get on the island to believe it is floating especially when soaked through?

The answer was no.

I had seen it.

Whether only for a second or two, I was proud to have travelled from Suva to the heartland of north-eastern Vanua Levu to discover for myself one of Macuata’s natural wonders and perhaps Fiji’s only earthen boat.

What was only a legend to me last week is today a proven reality and a sweet memory worth having.

I’ve been there, done it, and I will do it again one day!

• History being the subject it is, a group’s version of events may not be the same as that held by another group. When publishing one account, it is not our intention to cause division or to disrespect other oral traditions. Those with a different version can contact us so we can publish your account of history too — Editor.