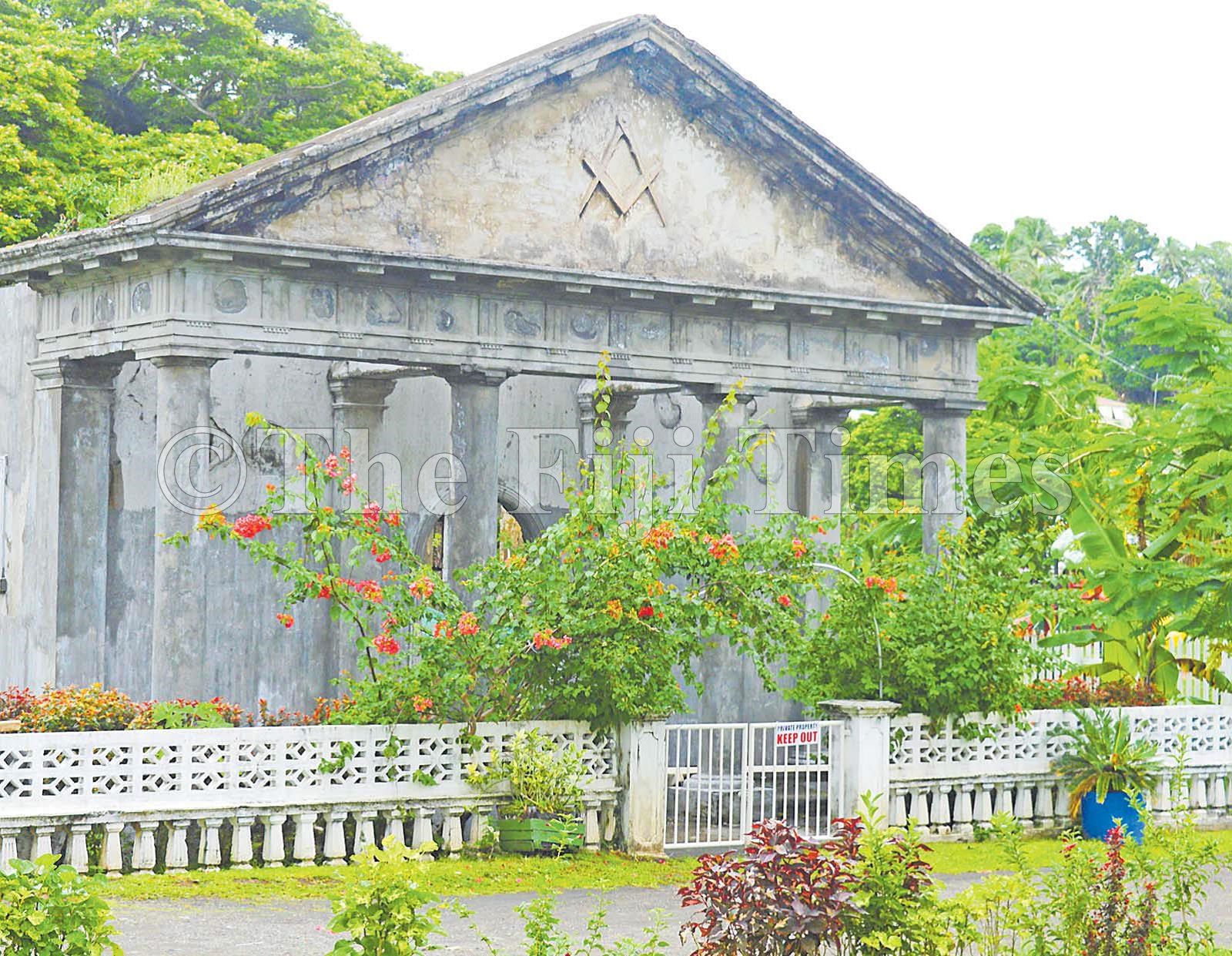 The ruins of the Masonic Lodge in Levuka today. Picture: JOHN KAMEA

Among the many things that find their humble beginnings in Levuka is the local chapter of the global fraternal organisation, Freemasons, which has been the focus of conspiracy theories and theorists since the middle ages and the watershed year of 1717, when the first Grand Lodge in England was formed.

Their secret handshakes, letters and symbols have led to a perception of secrecy, public scepticism and morbid curiosity about Freemasonry.

In November 1983, Pope John Paul II declared those with masonic associations were in a “state of grave sin” and may not “receive Holy Communion”.

That plus many anti-masonic establishments have failed to expunge the fraternity and today freemasons strive to be relevant and flourish in communities of the 21st century.

In Fiji, freemasonry began in 1871 at “high noon” on December 27 when a “Lodge of Free and Accepted Masons” in Polynesia was opened at Levuka, then the seat of Government headed by Ratu Seru Cakobau. Note that in the 1870s Levuka was full of tumultuous and dramatic events.

The year 1871 was remarkable in that it marked the rise of Cakobau’s government – Kingdom of Viti, which only lasted until 1874.

During his reign, Cakobau faced fierce opposition from western colo tribes who resisted white influence and the infiltration of Christianity.

The year 1871 also featured the mounting of revolt from among groups of natives and Europeans.

The white supremacist movement, the Klu Klux Klan, mysteriously sprung up in Levuka.

It was also around this time that Freemasonry emerged. Before it got established, some European settlers of Levuka advised Ratu Cakobau saying Freemasonry was a “dangerous secret society”.

But after enquiring with some of his cabinet ministers, Cakobau was convinced otherwise.

“…He issued a signed document authorising Lodge Polynesia to meet “Under Royal Patronage and by Permission”, “the website Levuka.wordpress.com noted.

Formally establishing the organisation was not straightforward though. There were some protocols that were overlooked.

The charter had been obtained by a Capt Alexander Barrack from Sydney Lodge member, Robert Burns and this was deemed unconstitutional.

“It appears that the founding brethren, men of high integrity and some of them with considerable Masonic experience, were under the impression that a particular lodge in Sydney, Australia, had some sort of District Grand Lodge authority to grant a charter for a new lodge,” noted Sir Leonard G. Usher in the book, The Lodge of Fiji 1882-1982.

“It took a little time before the realisation of irregularity dawned on the brethren concerned, and before an exchange of letters, taking months to travel to and from halfway around the world by sailing ship, resulting in the granting of a charter to Lodge Polynesia,” the book said.

The charter was No. 562 in the register of the Grand Lodge of Scotland and dated February 1, 1875.

There was no permanent place where members could congregate so early meetings of Lodge Polynesia were held in various parts of Levuka Town.

That problem was solved when Bro. P.W.Murray, who left money and property to the lodge, assisted in the building of a temple that was consecrated on July 14, 1913, and stood until 2000.

The building of the temple was assisted by the generosity of Bro. P.Morris who gifted the land on which the temple stood.

The temple was a peculiar structural landmark in Levuka Town in the 1800s especially when most buildings around were British bungalows.

It was inspired by Roman architecture and survived many strong hurricanes.

However, in the wake of the political turmoil of 2000, the temple was razed by angry villagers from Lovoni, who vented out in the open their anti-masonic sentiments.

They were not the only ones.

For generations, many Fijians including residents on Ovalau had viewed freemasonry with suspicion.

There were rumours that tunnels led from under the masonic lodge to Nasova House, on the western end of Levuka and the old Royal Hotel.

These secret pathways connected to other meshwork routes leading to the Grand Lodge of Scotland in the United Kingdom.

Today the Levuka’s masonic lodge is a mere shadow of its past.

Located next to Queen Victoria Hall, the premises of the Levuka Town Council, it is now used as a plant nursery.

On July 12, 1881, the United Grand Lodge of England had issued a warrant for the establishment of the Lodge of Fiji, No. 1931 at “Suva Na Viti Levu in the Colony of Fiji”.

A chartered ship brought members from Lodge Polynesia on Ovalau to attend the occasion.

“When proceedings began, W. Bro. George Smith of Lodge Polynesia was in the chair and the sitting Master of Polynesia, W.Bro.F.H Dufty, read the warrant of the new lodge,” The Lodge of
Fiji noted about the proceedings.

“Two more past Masters of Lodge Polynesia, W. Bros George Moore and P.S. Solomon, and W.Bro.J.C Doull, of Lodge 421 I.C then assisted in the installation of W.Bro. C.D. Cuthbert, of Lodge
439 I.C. as the fi rst Master of the Lodge of Fiji.

Sir Len’s book further stated that at the initial meeting in addition to the warrant from Grand Lodge, two dispensations (important written ordinances) were read.

One was about the obligatory lapse of time between the “conferment of successive degrees on a candidate”.

Note that a degree is the stage of membership in a lodge.

There are three basic degrees in freemasonry, each representing a stage of human development.

The first dispensation was designed to help the lodge to build up its membership.

At the inaugural meeting five names of candidates for mentioned for initiation while nine joining members were proposed.

The second dispensation that was read outlined the times when wearing masonic clothing or regalia were permitted.

These were during “divine service, at the funeral of a brother, who had expressed a wish for Masonic burial and at the laying of the foundation stone of a public building erected for pious or charitable purposes”.

The members took the second dispensation literally and that night they appeared in full regalia at a ball to celebrate the birth of a new lodge.

According to Sir Len, the initiation fee was fixed at ten guineas ($21 in decimal currency).

From these subscriptions, one shilling a month for each member went to the Grand Lodge in London.

Freemasonry, in general, has evolved around the world, one of it being its diminishing numbers and popularity.

Nevertheless, it remains a law abiding, peaceful and involved body involved in creating a civilised and harmonious community and world.

Today, masons in Fiji, through their lodges in Suva, Levuka and Lautoka, take part in a variety of charity events and community projects to support underprivileged members of the community.

Over the past five years, they have been involved in education, health, humanitarian assistance and social justice, among others.

And despite the negative perception hurled against them, Freemasons in Fiji march on, continuing
the initiatives their brethren started in Levuka at high noon 149 years ago.