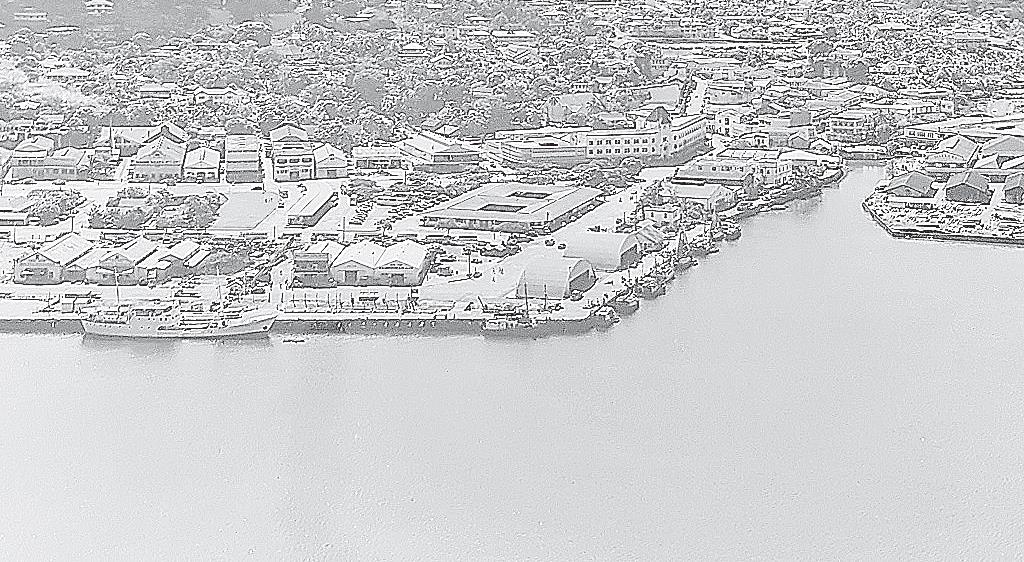 An aerial shot of Suva in the 1950s. Picture: FIJI MUSEUM

In the 1870s when talks of moving the capital to Suva surfaced, the once centre of Fiji’s modern civilisation, Levuka, was literally bursting at its seams.

In the book, Fiji’s Heritage: A History of Fiji, writer Kim Gravelle says the town was “tickling the sides of the cliffs, hard up against the mountainside with nowhere to go”.

The capital was going to be somewhere colonial settlers dreamed was big enough to be the ultimate city, showcasing strength, glory and civic pride.

It had to have land for expansion -lots of it, and a good harbour to handle increasing port trade and sea travel needs.

In the end, the choice fell squarely on Suva, although a few places were eyed, such as Galoa in Kadavu and Nadi in the western part of Viti Levu.

Gravelle says that rather than relying on local knowledge and counsel, the British sought the advice of their experts and a gentleman named Col. Smythe picked Suva.

“He described its beautiful harbour and surrounding hillsides as a perfect location,” Gravelle notes.

Col. Smythe’s choice seemed to have been a good one. In 1859 he was selected to travel to Fiji as commissioner to look at the viability of the cession of Fiji to England.

According to Wikipedia records, his expert opinion was also sought to “value the group of islands from a strategical as well as a commercial point of view”.

The botanist, Dr Berthold Carl Seemann, was also part of Col. Smythe’s expedition. But while Col.

Smythe may have made official and professional recommendations about Suva, the swampy peninsula’s practical attraction came in the form of two businessmen, Samuel Renwick and William Thomson, who offered a large portion of the land they owned.

They even personally recommended sites specifically to set up offices for the colonial administration, which boosted the attraction of the swampy peninsula.

Their business offer was accepted and the shift of the capital was given the green light by British authorities in 1877.

But Suva at the time did not have roads and streets lined with bars, buildings and British bungalows which Levuka had enjoyed for decades.

Built on the back of pioneers’ hard work and sacrifices, it took the Ovalau town many decades to reach its look of the 1870s.

Developing Fiji’s future city had to start from scratch.

The swampland had to be given a massive facelift to reach some semblance of Levuka’s glory.

Colonel Pratt of the Royal Engineers was given the prestigious responsibility of overseeing the transformation of Suva’s mangrove swamp and catapulting her reputation into the early 20th century.

This proved to be a nightmare at first, made worse by verbal attacks launched by those who opposed the Levuka to Suva move.

“In fact, the work was hardly underway before the attack began. But no one seemed to suggest any alternatives,” Gravelle notes. Among the first streets to be designed were Victoria Pde and Thomson St, Suva’s first commercial heartbeat and nerve centre.

“In October 1880, a small crowd gathered under an ivi tree in what would eventually be the centre of town to witness the first public sale of Suva land,” Gravelle writes.

However, on August 30, 1882, the Governor, the Colonial Secretary and other department heads boarded the vessel, Ocean Queen, bound for Suva. What followed them was a barrage of verbal onslaught. They were called traitors and defectors and their trip was termed “heartless desertion”.

But there was no turning back! Eventually many of those scathing attacks, even from Levuka’s crème de la creme, slowly subsided until opposition fizzled out.

First, residents of Levuka and Suva had to be in contact with each other.

This was a practical and essential need that transcended civic pride and factions.

The famous pigeon post was established and this ran for some time.

Messages were put in a tube and then tied to the homing birds’ leg which took a shorter time than the usual steamers.

Mail delivery by animals was not new to Fiji, however.

It had been practised in many countries of the world, especially so as a way to quickly transport letters over long distances, until the advent of motorised vehicles.

Pigeon post was also important for this newspaper so its founder, George Littleton Griffiths, became an ardent supporter so that the people of Levuka could acquaint themselves with shipping news, sights of vessels, race results and other current affairs.

Those in Suva also got to know the happenings on Ovalau.

Runners were employed to relay mails by running.

This post style covered an average of 80 miles a day.

Like Levuka, Suva’s principal recreation was its public meeting hall, which hosted all sorts of social events.

Because of the abundance of land, there was a “parade” where residents could enjoy a stroll and a racecourse at Muanikau for watching stallions and mares engage in equine speed games.

Around the time of Suva’s establishment, rumour mills churned out gossips of annexation by New Zealand.

Within a decade or two, Suva developed beyond recognition.

The mangrove colonies were cleared, the land was reclaimed, buildings sprung up everywhere and the muddy roads finally gave way to manicured roads and streets.

Its deep port made sea travel pleasant. People heard about the Colony’s new capital and travelled from all parts of the globe to visit the newest port in the South Seas. Suva was booming!

By 1902, people could travel from Suva to as far as Nausori by pontoon ferry.

Forms of land transportation were explored, including those pulled by horses and men. Smaller streets were designed and named to connect residents to any part of the town.

According to the Evening News of Sydney, Australia of February 12, 1923, a new fire engine was acquired by Suva town for a sum of $3000 pounds and a new fire station erected to avoid a similar disaster.

As the lower and flatter parts of town got occupied, people looked for towering hill sites to build their homes and display their opulence.

While Levuka suffered slugging economic growth and turned into a “ghost town” Suva came out the clear winner over the old capital in the race for prestige and new money.

Families and businesses of Levuka slowly packed up and moved south-west, including this newspaper.

“Renwick and Thomson’s gambit had paid off. And as far as Col. Smythe’s decision went, he didn’t have to put up with the rain,” notes Gravelle.

Nevertheless, today Levuka remains in a special place among Fijian hearts. In the future, its significance as part of Fiji’s development history will become more prestigious and unique, especially as our towns and cities evolve in modernity and makeup, among other areas.

UNESCO in its website, says Levuka is easily recognised for “its low line of buildings set among coconut and mango trees along the beachfront” – a “rare” and “outstanding example of late 19th century Pacific port settlements”.

It says it is the result of “development by the indigenous community” and “integration of local building traditions by a supreme naval power” – Britain – had led to “the emergence of a unique landscape”.

Levuka’s line of bure have long gone but its beach street buildings, famous landmarks and British bungalows remain to tell the world the countless stories of events and people within its boundary,
stories whose rarity and the significance no other Fijian town will be able to claim, equal and impart, now or in the future.