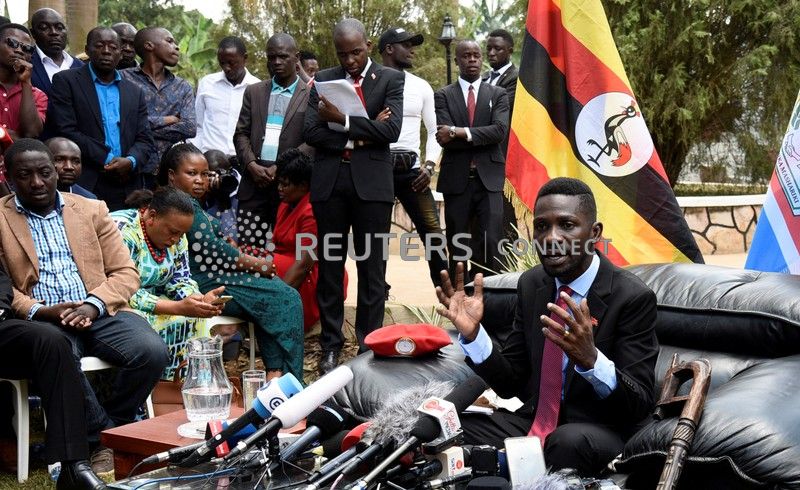 KAMPALA (Reuters) – Diplomats and rights groups condemned Ugandan authorities on Friday for ordering the suspension of more than 30 senior journalists after TV and radio stations covered protests by supporters of a pop star turned politician.

The Uganda Communications Commission did not go into detail, but all the outlets have been covering protests that erupted a day earlier after the arrest of Bobi Wine, who is seeking to challenge veteran leader Yoweri Museveni for the presidency.

The regulator had identified “suspect” content, a spokesman for the Commission said. “We needed these people who are in charge of programming in these institutions to step aside to allow for investigation to happen without interference,” Ibrahim Bbossa added.

The companies – including NTV Uganda, NBS TV, Capital FM and Salt TV – have written to the regulator saying they will not comply with the order and asking for talks. The Uganda Journalists Association said it was planning a legal challenge.

Diplomats from the United States, the European Union, Britain, Japan and 12 other countries – many of them major donors – issued a joint statement calling on Uganda to respect people’s rights to freedom of speech and expression.

“We are also concerned about the excessive use of force by Ugandan police and security services against peaceful protesters and political opposition,” they said.

Nicholas Opiyo, from the Chapter Four rights group, said the government had been rattled by Wine and his supporters.

“Museveni has faced a challenge in Bobi Wine that he has not faced before … a musician who has the power and charisma to speak to the hearts and minds of ordinary Uganda,” Opiyo added.

Wine was elected to parliament in 2017 after a campaign powered by his politically-charged lyrics – many of them direct attacks on Museveni, accusing him of failing to tackle rampant corruption and staying in power too long.

The singer – whose real name is Robert Kyagulanyi – was released on bail on Wednesday. But he still faces charges of staging unlawful demonstrations after championing protests against taxes on social media usage last year.

Museveni, 74 and in power since 1986, is expected to stand in the next presidential election in 2021. The opposition and some rights groups say he has grown authoritarian, citing frequent tear-gassing of opposition rallies, jailing of campaigners and harassment of independent media.

Museveni dismisses the criticism saying Uganda is a democracy and he had won legitimate elections.