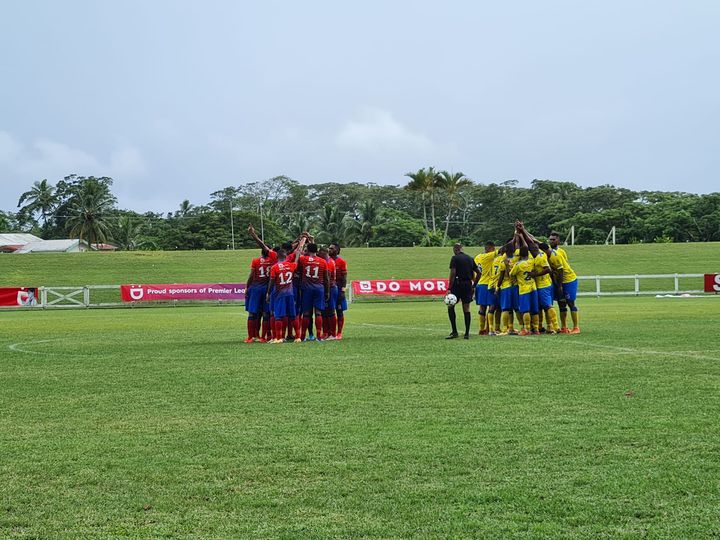 The Navua and Nadroga football teams at half time. Picture: FIJI FA

Navua shocked Nadroga on their home soil winning the Digicel Premier League wooden spoon decider 2-1 to maintain their status in the top flight and boot the Stallions to the senior division next season.

Heading into the fixture, the Southerners trailed Nadroga by three points and also had a one-goal deficit but managed to claim the slightest of the winning margin of 2-1 to remain in the premier division.

Mannav Prasad proved to be the hero for Navua scoring a goal in each half.

He put Navua up moments before half time after connecting with a low cross from Monit Chand from the left flank.

In the 54th minute, Mannav showed some individual brilliance, shielding the ball from a Nadroga defender and unleashed a bullet left footer, which went into the net after hitting the post.

Nadroga’s goal came via a penalty after Tomasi Tuicakau was fouled inside the box.

Navua president Rajeev Prasad said it was the teamwork that got them through in the end.

Rajeev said they lost some support in the second round after a dismal performance but with this victory, it would ensure they got all that support back.

“I wish to thank our two coaches Mohammed Shafeel and Tagi Vonolagi for having the faith in the boys,” he said.

“We were sure that we were going to win. There were some moments when Nadroga threatened but we kept our composure and we deserve to be in the premier division.

Tailevu Naitasiri has gained automatic promotion to the premier division next year.