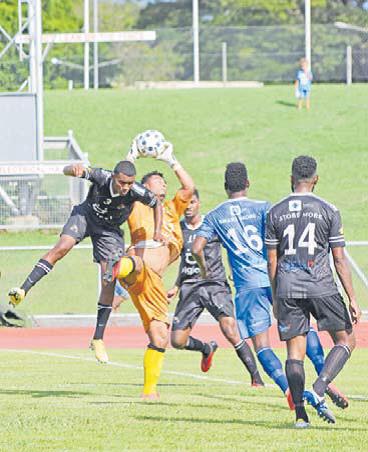 The Lautoka football team is opting for a pragmatic approach against the undefeated Labasa side in the feature match of Round 11 during the Digicel Premier League encounter at Subrail Park in Labasa on Saturday.

Head coach Imdad Ali said he was hoping for a solid performance and something to build on for the future.

“We will be taking a cautious approach,” he said.

“I will be happy to let the game develop before letting the team off the leash to create goal scoring opportunities. The team is improving after each game because of our crop of talented footballers.

“Lautoka is a very good side and we have players who could win games for us. We continue the process of figuring out what works and then bring it all together each week. The team has to keep its composure and wait for the right moments.

“It’s going to be a tense, nervy and tight game.”

Ali said Labasa was a possession-based side and expected them to dominate the ball for long periods during the match.

“We have to be realistic about where the opposition’s strengths are in certain areas.

“They are an experienced outfit and will be playing in front of their fans.

“We will be the underdogs because Labasa is the only undefeated team in the competition whereas we’ve lost a match.

“I know the Lautoka fans will want to see a really exciting and an attack-minded display from the boys, but I don’t think we will play Labasa on the front foot. But that doesn’t mean we will come back empty-handed.”

The VITI Water Flow-sponsored Lautoka side leads the DPL points table with 23 points and is the firm favourites for the title based on their current performances while Labasa can also claim the crown.

The match is scheduled for a 1pm kick-off.