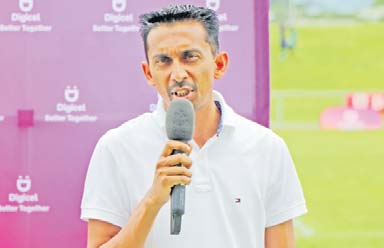 “We definitely added a new page in the history books of Fiji football with the first Digicel Premier League championship winners and congratulations to Lautoka for winning the title,” Mohammed said.

“It was at Churchill Park in March that the curtain raisers for the DPL and you all know what happened after that. The challenges that COVID-19 brought to us, I think it is an understatement to say that it was a challenge. Everything came to a stop for almost six months, but I thank you all for making it possible in bringing sports back to the stadiums.

“Also, I would like to thank the Fiji FA president, CEO and their team for the foresight in planning in bringing football back to the grounds as soon as the restrictions were uplifted.”

The Digicel CEO said they were not able to complete all championships under the Digicel sponsorship, however, they remained committed.

“We were not able to complete all the championships that were sponsored by Digicel this year and we all know the reason for that, but that doesn’t mean that we will shy away from it. Digicel remains committed and hopefully, we can bring you more competitions next year right from the grassroots level to the premier level.”

Mohammed said Digicel was proud to be associated with Fiji FA which had the foresight in bringing equality to the sport.

“This year, in a new edition, the Fiji Football Association also launched the Women’s Super League, which is the first female competition in the football arena in Oceania region introducing the top division league and it is also a privilege for Digicel to be associated with Fiji FA who has the foresight for equality.

“As we all know, gender equality is part of the UN sustainable development goals, so Digicel is very proud to be associated with Fiji Football which has such foresight in bringing equality amongst the football arena.”