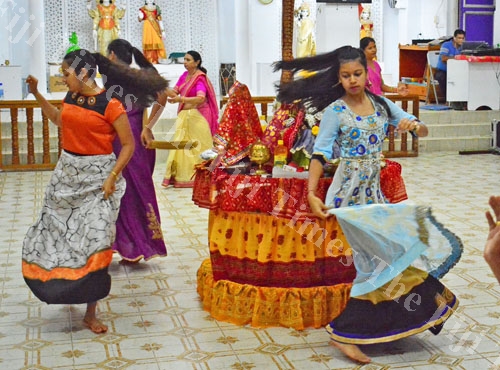 Devotees chant and dance during the Navratri Celebrations at Latchmi Narayan Temple in Holland Street in Suva on Wedensday night. Picture: JONA KONATACI

THOUSANDS of Hindus who are believers of goddess Durga celebrated Navratri.

Nav means the ninth night which symbolises one of the significant Hindu festivals.

Navratri mostly falls in the month of October just after the celebration of Pitra Paksha.

This year it was celebrated for 9 days which ended yesterday.

Devotees worshipped Mata Durga for the past 9 days and yesterday chanted, danced and did the garbha which is a special dance.

This dance, performed by men and women, is done around the statues of Mata Durga.

Special costumes are also made for the garbha dance. During this period the different forms of Durga is worshipped.

Each day symbolises a different form of matadi.

In this pooja goddesses Latchmi, Saraswati are worshipped as three different manifestations of shakti or the cosmic energy.

Hindus believe that goddess Durga represents the power that annihilated the demon Mahishasura after a relentless battle lasting nine days and nights.

It is believed that Lord Shiva gave permission to Durga to see her mother for nine days in a year and this festival celebrates this visit.

During Navratri, devotees fast and prayers are offered for the protection of health and property.

A period of introspection and purification, Navratri is traditionally an auspicious time for starting new ventures.

As usual, devotees offer sweets and offerings to guests and families who visit homes or temples.

This year the festival started on Wednesday, October 10.