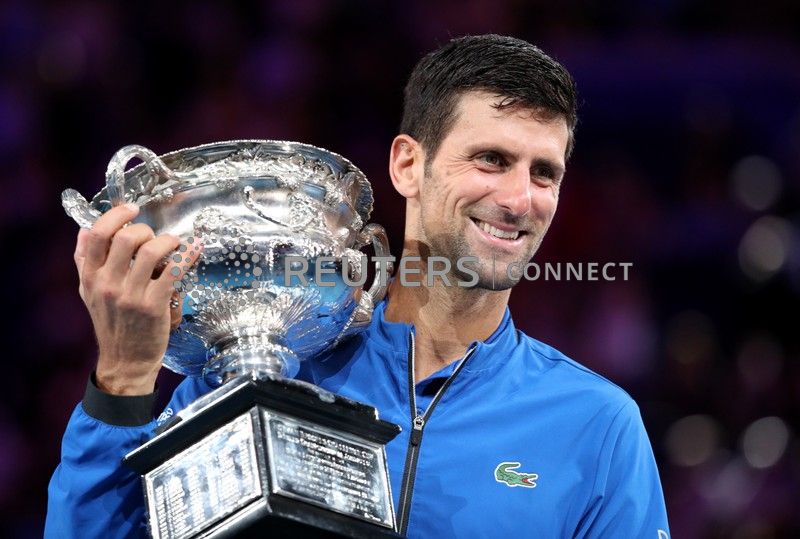 MELBOURNE (Reuters) – Novak Djokovic claimed a record seventh Australian Open crown in devastating style on Sunday as he condemned Rafa Nadal to the most stinging defeat in their long Grand Slam rivalry.

Three years after thrashing Andy Murray for the 2016 trophy, the Serbian regained his Melbourne Park throne with a 6-3 6-2 6-3 procession, clinching his 15th Grand Slam title and third in succession.

Moving past Pete Sampras into outright third on the all-time list of Grand Slam winners, Djokovic will head to Roland Garros looking for a second “Nole Slam”, having already swept all four majors in 2015-16.

Only Federer’s 20 and Nadal’s 17 outstrip Djokovic’s tally of Grand Slam trophies, but on the strength of the champion’s virtuoso performance at Rod Laver Arena, they will be looking nervously over their shoulders.

It was a win that left even Djokovic marvelling, seven years after needing a record five hours and 53 minutes to fell the Spaniard in the 2012 classic at Melbourne Park.

“It ranks right at the top. Under the circumstances, playing against Nadal, such an important match, it’s amazing,” the 31-year-old told reporters after needing barely two hours to extend his perfect record in seven Australian Open finals.

The peerless Serb broke Nadal five times while conceding only a single break point, and coughed up only four unforced errors in the first two sets.

Sealing the win when a desperate Nadal fired a backhand long, Djokovic kneeled on the blue hardcourt and shook his fists at the sky.

He moved past Federer and Australian great Roy Emerson’s six Melbourne titles, after two barren years Down Under with elbow problems.

After raising the Norman Brookes Challenge Cup aloft, Djokovic said American Sampras had inspired him to pick up a racket.

“It was definitely a sign of destiny to start playing tennis, to aspire to be as good as Pete. To surpass him with Grand Slam titles, I’m speechless,” he said.

Blitzed from the start, Nadal could only congratulate an opponent that condemned him to his worst Grand Slam defeat in their long rivalry.

“It has been very emotional two weeks. Even if tonight was not my best, I had somebody that played much better,” said the 32-year-old.

It was a greater humbling than even the quarter-finals of the 2015 French Open, when Djokovic thrashed Nadal 7-5 6-3 6-1 to end his six-year winning streak at his favourite claycourt tournament.

Broken in his first service game on Sunday, it was clear not everything was right with the Spaniard when at 4-2, he swung a forehand and completely missed the ball.

He was unable to take a point off Djokovic’s serve until the ninth game, when the Serb was already serving for the first set.

Nadal’s remodelled serve was clinically dismantled, and he punched his racket strings in frustration after giving up two break points in the fourth game of the second.

The Serb threw a fiery glance at his players’ box after breaking to 5-2 and fired two aces to take a two-set lead.

All business, Djokovic marched back to his seat in silence, without so much as a quiet fist-pump.

Nadal battled on but every piece of magic he produced was outdone by the Serbian sorcerer.

The Spaniard scrambled in to feather a sliced drop-shot over the net, raising premature cheers but Djokovic simply swooped on it and sent an even cleverer drop-shot cross-court.

After further baseline punishment, he broke Nadal for the fourth time, pulling him around like a puppet-master before tripping him up with another drop-shot.

Nadal finally prised a break point in the fifth game of the third but it quickly disappeared in a maelstrom of power hitting.

From there, Djokovic knuckled down to complete one of his most stunning victories.

Firing a forehand down the line to bring up two championship points, he converted the second when Nadal struck a backhand long, and the Serb’s reign over Melbourne was restored with a thunderous chorus of Serbian cheers.