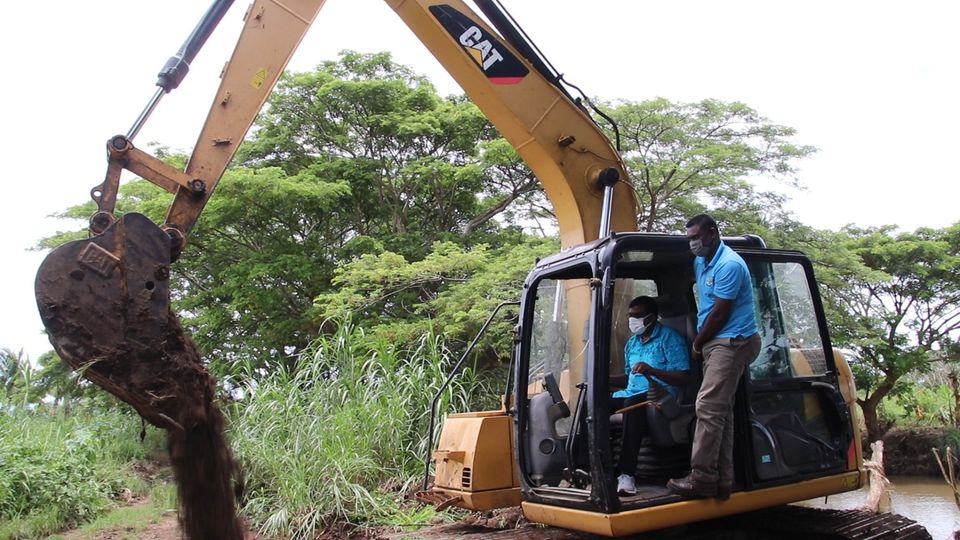 The commissioning of desilting works along the Nasivi river in Tavua is part of our efforts to safeguard the township of Tavua and its adjacent communities from flooding.

These desilting works are also expected to mitigate flooding as well for crop and livestock farms, sugarcane farms, and communities along the river.

A total of 3kilometres of river desilting works with an area of 8,000 square meters of mangroves is earmarked to be scrubbed to allow for the free flow of water out to the sea.

This will be undertaken by the Ministry of Waterways at a total cost of $48,000.

While commissioning the desilting works at Tavualevu Village in Tavua today, Minister for Agriculture, Waterways and Environment, Dr Mahendra Reddy said that desilting works will ease the water flow of the river during heavy rain.

Minister Reddy reiterated that the Ministry of Waterways would continue to be vigilant in clearing waterways throughout the country so that water can be discharged well to negate potential flooding and damages to infrastructure and protect communities.

Dr Reddy further noted that failure to clear the waterways from silt and debris brought in by flooding incidents brought about by natural disasters such as TC Cody could result in major infrastructural damages or in some instances, major damages to the houses and businesses in Tavua town which could lead to a loss in business, and threaten the livelihoods of thousands of Fijians.

“The Government is committed to building resilience amongst our communities and we will do this carefully, addressing issues pertaining to waterways, through increasing the conveyance capacity and releasing the free flow of water,” he said.

Tavualevu Village Matanivanua, Mr Tupa Telawa said during the annual rainy season, the village is constantly flooded and crops on village farms are washed away.

He further expressed his gratitude to the Ministry of Waterways as the villages’ livelihoods had been constantly and adversely affected by floodwaters.

“We would like to thank the government for assisting us in the dredging of the Nasivi River, as you know, over the years we have been suffering because of floods as this is a low-lying area.”

“Not only this, but many houses get flooded in Tavualevu and the villages adjacent to the river,” he added.

He acknowledged the continuous desilting works that had been undertaken by the Ministry of Waterways at the Nasivi river over the years and works currently being conducted, as it would mitigate flooding and safeguard their farms and homes.

The desilting works will be carried out 3km downstream of the river mouth from Tavua town and will include the removal of debris and silted material from the river.