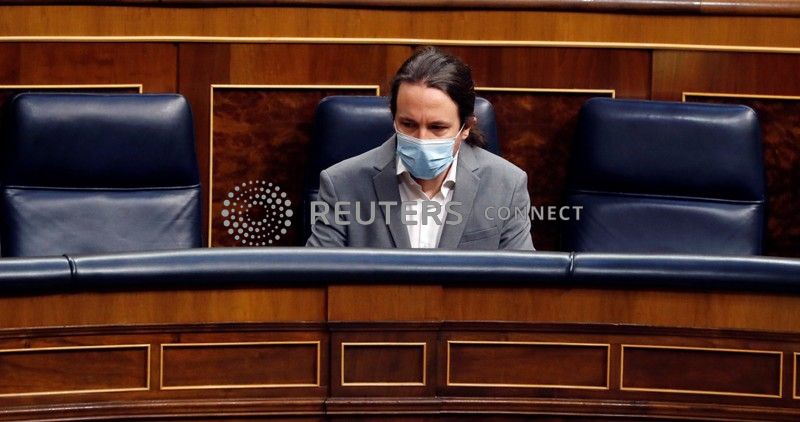 (Reuters) – Spain’s far-left deputy prime minister said on Saturday that a financial scandal which has rocked the royal family had presented an “historic moment” to push for a republic.

Pablo Iglesias, leader of the Unidas Podemos party, the junior partner in Spain’s coalition government, said the monarchy was no longer relevant to a younger generation.

“Less and less people in Spain understand, especially young people, that in the 21st century citizens cannot choose who their head of state is and that he does not have to answer to justice like any citizen and cannot be removed from charge if you commit a crime,” Iglesias told a party meeting.

Spain’s former King Juan Carlos left the country under a cloud of scandal last month and is living in the United Arab Emirates.

Once a popular monarch, he abdicated in favour of his son Felipe in 2014 after a tax fraud case involving members of his family and an ill-judged elephant hunting trip at a time when Spaniards were struggling with a deep recession.

In June, the Supreme Court opened a preliminary investigation into the involvement of Juan Carlos in a high-speed rail contract in Saudi Arabia. Switzerland’s La Tribune de Geneve newspaper reported he had received $100 million from the late Saudi king. Swiss authorities have opened an investigation.

The former monarch is not formally under investigation and has repeatedly declined to comment on the subject. His lawyer says he remains at the Spanish prosecutor’s disposal.

As monarch, Juan Carlos benefited from full judicial immunity though he can be prosecuted for any wrongdoing since he abdicated.

A poll published in August for the pro-monarchist ABC newspaper found 56% of respondents supported the monarchy, compared with 33.5% favoured a republic, while 6% did not know and 4.1% were indifferent.