‘Demolition of the year’: Dana White labels Adesanya the next big superstar of UFC 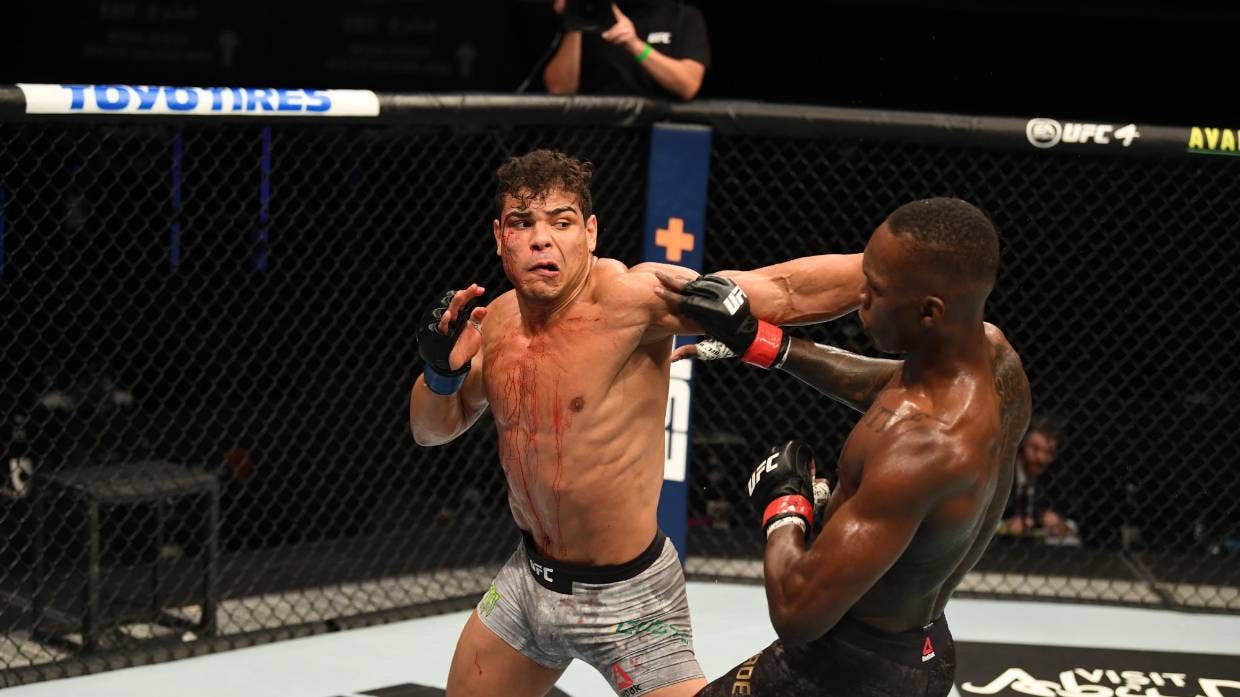 Blood drips from the eye of Paulo Costa shortly before he was stopped by Israel Adesanya. HANDOUT

So much is changing in the sporting landscape of 2020, but in the UFC two things are staying very much the same.

Israel Adesanya keeps winning and UFC president Dana White continues to talk up his middleweight champion as being on the way to becoming the face of the world’s biggest MMA promotion.

Adesanya, who fights out of famed Auckland gym City Kickboxing, has moved his MMA record to a perfect 20-0 with the second defence of his UFC middleweight belt by stopping the previously unbeaten Paulo Costa via second-round TKO on Sunday (NZT).

Before the fight, White was predicting a fight of the year contender. But such was the dominance of the Nigerian-Kiwi fighter’s stunning performance, White labelled it the “demolition of the year” post-fight.

“I think he’s going to be the next big superstar here, especially after tonight’s performance,” White said of Adesanya.

“The kid is an absolute stud.”

Without revealing pay-per-view numbers, White claimed the fight will have broken multiple records.

“The Last Stylebender” has previously been compared, by White, to Conor McGregor and although there are several other massive names on the UFC roster, if Adesanya isn’t the biggest of the lot now, it seems only a matter of time until he is.

The pre-fight stare down between Adesanya and Costa at the weigh-in was the most viewed in the UFC’s history.

When UFC 253 began, White said the video had recorded 1.5 million more views than the stare down from Conor McGregor and Khabib Nurmagomedov’s fight.

White also said all the UFC’s social media numbers before the Adesanya and Costa fight had been off the charts, a further indication of how big he predicts the pay-per-view numbers will have been.

Some of that could be put down to the current Covid-19 crippled sporting landscape but there is no doubt about Adesanya’s global reach, which will have only grown further given his brutal dismantling of Costa.

Now undefeated in nine fights since linking with the UFC, the outspoken Adesanya has the game outside the octagon to match the brilliance of his striking in it.

Going off his latest victory, that came at UFC 253 on “Fight Island” in Abu Dhabi, it’s hard to see who could seriously threaten Adesanya’s grip on the middleweight division.

Post-fight, White praised the toughness of Costa and his ability, but said Adesanya was simply on another level.

“Costa is that good, he’s a savage normally but Adesanya shut him down tonight,” White said.

After repeatedly attacking Costa’s lead leg for the majority of the fight, Adesanya dropped him with a left hook to the temple before raining down hammer fists to finish the bout 3:59 into the second round.

White was surprised Costa didn’t try to get into a clinch but said Adesanya forced him into a “very weird fight” for the challenger where he wasn’t able to cause Adesanya any difficulty.

“Costa usually goes after people like they owe him money.

“I think he landed one jab in this fight.

“He didn’t really throw punches at all, only kicks,” White said.

But White reiterated his belief that Costa’s ineffectiveness was down to Adesanya’s skill.

Adesanya won a US$50,000 (NZ$76,501) bonus for performance of the night but, given his earning power as a global superstar, that’s almost irrelevant for the undisputed UFC middleweight champion.

“Absolutely dismantled him and easily won the fight,” White said as he continued to gush over the performance.

“The first three calf kicks busted his leg then he hit him right on the side of his knee and he had a huge welt on his knee then the shin to his eye,” White said pointing to a cut Adesanya opened up on Costa’s eye.

Post his title defence, Adesanya said he wanted Jared Cannonier – who is on a three-fight win streak and is ranked No 3 in the middleweight division – next up, if he can get by former champion Robert Whittaker.

Cannonier fights Whittaker at UFC 254 on October 24 and White confirmed the winner of that contest is likely to be next for Adesanya.

Whittaker lost his belt to Adesanya in 2019 when the interim champion became the undisputed after he stopped Whittaker early in the second round.