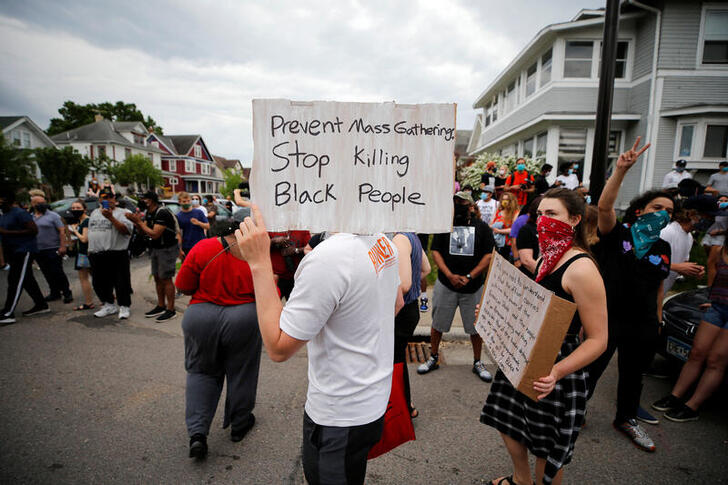 Protesters gather at the scene where George Floyd, an unarmed black man, was pinned down by a police officer kneeling on his neck before later dying in hospital in Minneapolis, Minnesota, U.S. May 26, 2020. REUTERS/Eric Miller

(Reuters) – The chief of the Minneapolis police on Thursday apologized to the family of an unarmed black man who died this week after a white officer pinned him down with a knee to the neck, a fatal encounter that has triggered two nights of violent protests.

Police Chief Medaria Arradondo said his department had contributed to a “deficit of hope” across the Minnesota city even before the death of 46-year-old George Floyd on Monday.

“I am absolutely sorry for the pain, devastation and the trauma that Mr. Floyd’s death has left on his family, his loved ones and our community,” he said.

Four police officers from Minneapolis have been fired over Floyd’s death after a video of the incident surfaced. It showed Floyd in handcuffs lying face down, groaning for help and repeatedly saying, “Please, I can’t breathe,” before becoming motionless.

He died in hospital shortly afterwards.

On Wednesday evening, protesters in the city clashed with riot police firing tear gas for a second night.

The unrest, accompanied by looting and vandalism, began hours after Mayor Jacob Frey urged prosecutors to file criminal charges against the white policeman shown pinning Floyd to the street.

The police chief said the vast majority of protesters had been peaceful but there was a core group of demonstrators who had been focused on causing destruction.

The U.S. Department of Justice said on Thursday it had made an investigation into police involvement in Floyd’s death a “top priority.”

The victim’s brother, Philonise Floyd, told CNN on Thursday that he was “tired of seeing black men die.” He said he understood people’s anger but urged protesters to be peaceful.

“To the police, I want them to get everything right, start doing your job the right way because I haven’t been seeing it,” Floyd said.

On Wednesday, U.S. President Donald Trump called Floyd’s death a “very, very sad event” after a reporter asked him about it.

“Everyone has the right to protest, there’s no doubt about that, but it needs to be peaceful… and in accordance to the law,” she told Fox News.

The case was reminiscent of the 2014 killing of Eric Garner, an unarmed black man in New York City who died after being put in a banned police chokehold.

“The role that entrenched and pervasive racial discrimination plays in such deaths must also be fully examined, properly recognized and dealt with,” she said in a statement.

A petition on Change.org calling for authorities to arrest and charge the four had more than 1.1 million signatures on Thursday morning.

The city has identified the four officers involved in the encounter as Derek Chauvin, Thomas Lane, Tou Thao and J Alexander Kueng.

It did not say which officer was seen in the video kneeling on Floyd’s neck, but local media has identified Chauvin as the officer in question.

Chauvin’s attorney, Tom Kelly, said in an email to Reuters that he did not have a statement about the incident.

In 2007, Chauvin received a letter of reprimand for violating the department’s mobile and video recording policy, according to disciplinary records obtained by Reuters through a public records request.

The Minneapolis Star Tribune also reported that Thao was one of two officers sued by a man who accused them of excessive use of force. The case settled out of court for $25,000, according to the paper.