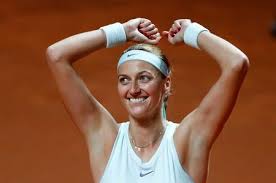 BARCELONA (Reuters) – Three-time champion Petra Kvitova defeated Kristina Mladenovic 6-3 7-6(5) to reach the third round of the Madrid Open on Monday.

The second seed Kvitova edged her French opponent after a nervy tiebreak in the second set to win in one hour 55 minutes.

The Czech has now won eight consecutive games at the Caja Magica and will face wildcard Sorana Cirstea or Caroline Garcia in the last 16.

The Dutchwoman faces another Latvian, Anastasija Sevastova, in the next round, after she beat Romania’s Mihaela Buzarnescu 6-3 6-4.

“She can also be really tricky because she has the slice, the dropshot, so I cannot be as far back as I was today,” said Bertens. “But against her, I can also play my own game more.”