Deep in Guatemala’s jungle, drugs and murder are new neighbors to palm oil 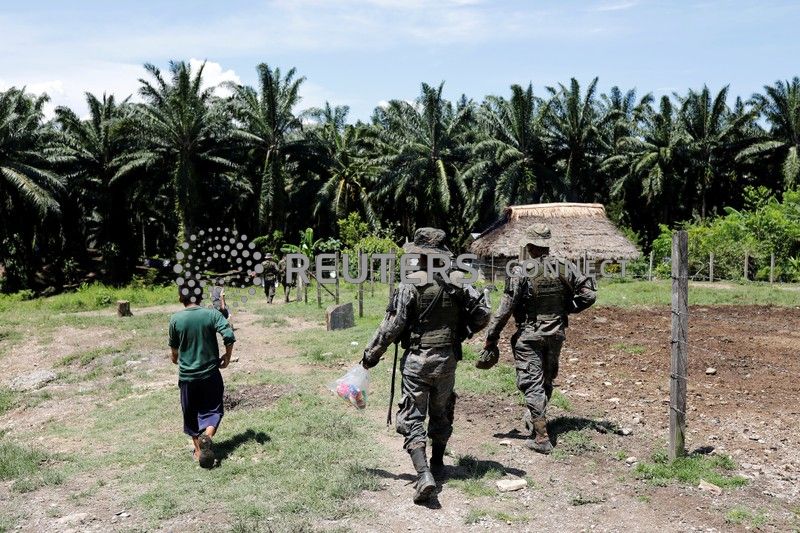 Soldiers are seen near an African palm oil plantation run by NaturAceites during a temporary state of siege, approved by the Guatemalan Congress following the death of several soldiers in the area, in the village of Semuy II, Izabal Department, Guatemala September 9, 2019. Picture taken September 9, 2019. REUTERS/Luis Echeverria

SEMUY II, Guatemala (Reuters) – Bulletholes scar a wall in the only school in Semuy II, a remote village in northeastern Guatemala where three soldiers were shot dead early in September as they searched for jungle landing strips used by drug traffickers.

In the village school’s classrooms, books and open notebooks gathered dust on the desks, while on a board, the fateful date of the shootings was written in red ink: “September 3.”

President Jimmy Morales said the soldiers were killed by villagers protecting a drug shipment. In response, the government gave the army temporary emergency powers over a vast swathe of surrounding territory, leading to some startling discoveries.

Searches uncovered coca plantations and cocaine laboratories, including in Semuy II’s municipality of El Estor, suggesting drug gangs have been operating freely in an area better known for its natural beauty, mining and African palm. The deaths occurred on the fringes of the Pataxte estate that supplies palm oil to Nestle and Cargill, with authorities saying landing strips on the estate had been used by traffickers.

“We’ve found landing strips, some of them clandestine. There are some strips that are legal, but there’s evidence of planes landing with illicit goods,” General Luis Alberto Morales, deputy head of the presidential general staff, told Reuters.

Ministry of Defense spokesman Oscar Perez said investigators had also found the remains of torched planes in the wider area, a tell-tale sign the strips were being used for trafficking.

The discovery is a dramatic development in the drug war that brings fields and laboratories used to make cocaine closer to the U.S. market than ever before.

The development led Guatemala’s interior minister to declare that the country was now a cocaine producing nation – a distinction previously reserved for Andean countries in South America.

Images provided by the government of the army’s discoveries show what appears to be a well-built laboratory, which Morales said could produce up to half a tonne of cocaine a day. He said the government had discovered 1.5 million coca plants along with the labs, estimating a street value of $800 million.

Such numbers may be inflated. While Andean plantations vary widely in density of plants per hectare, it would be hard to fit so many plants on the apparently small areas of land so far discovered by the soldiers in the wake of the killings. Only last year, Guatemala discovered a small field of coca for the first time.

However, the discovery of sophisticated laboratories fits with recent trends of Colombian gangs exporting half-processed cocaine to finish the product in countries with less strict policing, said Hernando Bernal, an official from the United Nations drugs and crime agency’s illicit crop monitoring program.

The U.S. embassy in Guatemala declined to comment for this story.

The events of Tuesday, Sept. 3 are murky. Around noon, a patrol of nine soldiers with weapons at the ready tried to cross the village of Semuy II, the first time military officials had been seen in years, locals and authorities agree. At this point, the versions diverge.

Authorities say the villagers ambushed the soldiers and shot three of them behind the school. Villagers say soldiers sparked a dispute and fired off rounds into the air, and then armed locals opened fire on the soldiers.

However, none could say who had fired the fatal shots and no one has been arrested by the investigating authorities.

Speaking in the hills behind the village where he farms cocoa, community leader Vicente Perez, 43, denied the government’s accusation that the villagers were growing drugs and protecting traffickers.

“Everything the president is saying is a lie,” Perez said. While he did not witness the shootings, he said it seemed that collective fear led the situation to spiral out of control.

Soldiers and police had not been seen in the area since he was a child, during Guatemala’s civil war, he said, adding that the soldiers should have requested permission from the elders of the village before passing through.

According to Edgar Caal, a marine who survived the attack, more than a hundred locals waited with shotguns, machetes, sticks and stones, and before attacking issued the patrol a warning: “Whoever comes to this village is already a dead man,” he related in a video released by the government.

“We ran for our lives,” the young marine said from a hospital bed while the camera took in other injured comrades with scars on their hands, wrists and backs.

Any uptick in violence and drug trafficking in the area could create problems for local producers of palm oil, the world’s second-most popular type of oil, used in consumer products ranging from soap to chocolate.

Wedged between a jungle-clad hillside and a sprawling palm estate, Semuy II is built on land donated by NaturAceites, a company owned by one of Guatemala’s richest families, which delivers the oil to commodities giants Cargill and Nestle.

“Ten strips belonging to NaturAceites have been found in the area. That doesn’t mean that the (company) is using them, but they have been used by people who engage in illegal trafficking,” Morales, the general, said.

NaturAceites said the killings were unrelated to its operations and did not take place on its land. It said it had two airstrips in the area and that every unauthorized landing on its property had been reported to the Guatemalan authorities.

Reuters could not independently verify the number of NaturAceites landing strips in the area.

Hector Herrera, sustainability director at the company, said the government should do more to improve the quality of life for the locals, most of whom eke out a hard-scrabble existence without basic services.

“What is required in the area is the permanent and holistic presence of the state to provide solutions to what the communities lack,” he said.

In reply to requests for comment on the killings, drug trade and conditions in Semuy II, Nestle said it was “immediately contacting all our suppliers who supply directly from NaturAceites to gather further information.” Cargill said that to date, NaturAceites had been found to be operating to its standards but that if it were found to be acting illegally it would take action.

Some Semuy II villagers said they were afraid both of the military camped out under the towering palms, and of what the future holds once the soldiers leave.

Ruth Rax, a 30-year-old housewife who lives opposite the school where the marines were gunned down, said in Q’eqchi she saw villagers open fire, but did not know who shot the soldiers.

“We don’t know how this will end once the military have gone,” she said.