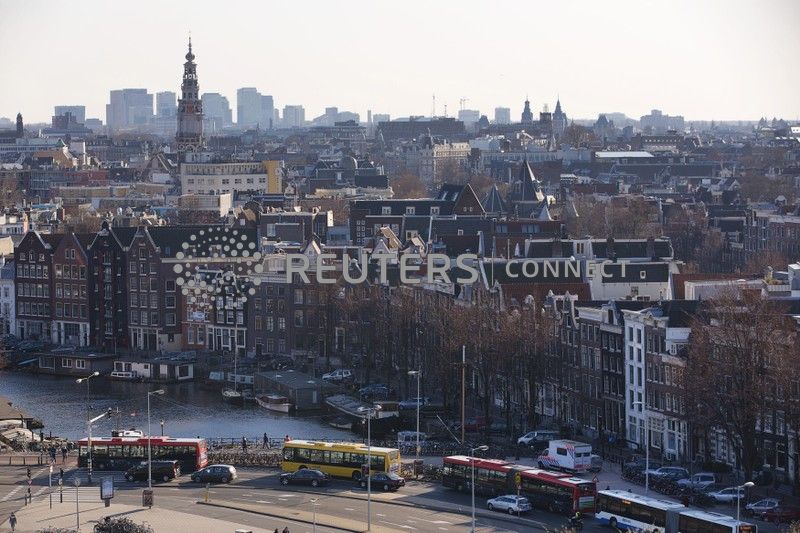 A rootop view of Amsterdam from SkyLounge on the 11th floor of the DoubleTree by Hilton Hotel in Amsterdam April 2, 2013. REUTERS/Michael Kooren

The Dutch debt agency said it had given preference to investors that could prove their ecological credentials. Thirty-two investors had registered as green before the 20-year bond’s auction, in which the Netherlands raised almost 6 billion euros.

It said that 82.5% of the bids came from what it called “green real money accounts”, though such investors accounted for 28.5% of the allocated amount once the auction was over, the debt agency said in a statement on its website.

The initial price guidance was put in a range of 18 to 21 basis points (bps) over a benchmark German bond. The spread was finally set at 18 bps over and the bond yields 0.557%.

Investors and bankers said it was the first time they had seen the issuer, in this case the Dutch debt agency DTSA, explicitly prioritizing investors with green credentials and offering them a more favorable allocation.

Investors who could prove their green credentials were given an additional allocation of up to 10%, the Dutch agency said, which meant that a green investor placing an order for 50 million euros could expect up to 55 million euros.

The bond was offered at an auction in which there was no underwriting role for primary dealers and client bids were placed directly with the Dutch debt agency. Other euro zone sovereign borrowers have issued green bonds via syndication.

With increasing regulatory scrutiny over the origin of funds, issuers are taking steps to know their end clients.

“A lot of people are now much more concerned about the sustainability aspect,” said Roman Schmidt, divisional board member capital markets at Commerzbank, adding that regulators were introducing stricter know-your-client rules.

The increased scrutiny works both ways, with portfolio managers also increasing their dialogue with borrowers.

“As a portfolio manager, I meet all the issuers I have in my portfolio, which is not the case in traditional credit funds,” Alban de Fay, a credit portfolio manager at Amundi Asset Management, told a conference in Stockholm last week.

Green bonds comprise a small fraction of the overall bond market, but interest has soared as banks, sovereigns and companies look to tap into increasing investor appetite.

Hong Kong on Tuesday sought to raise up to $1 billion in five-year green bonds as the former British colony acts to establish itself as a center for green finance.

The Dutch debt agency said it would reopen its 20-year green bond in the coming years to raise a total amount of around 10 billion euros.