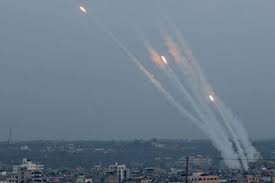 Rockets are fired from Gaza towards Israel, in Gaza May 5, 2019. REUTERS/Mohammed Salem

GAZA/JERUSALEM (Reuters) – Rockets and missiles from Gaza killed four civilians in Israel, while Israeli strikes killed 19 Palestinians, more than half of them civilians, in surging cross-border fighting on Sunday, according to Gazan officials and the Israeli military.

Israeli Prime Minister Benjamin Netanyahu said he ordered the military to continue “massive strikes” against Gaza’s ruling Hamas group and Islamic Jihad in the most serious border clashes since a spate of fighting in November.

Israel’s military said that more than 600 rockets and other projectiles – over 150 of them intercepted by its Iron Dome anti-missile system – had been fired at southern Israeli cities and villages since Friday.

A rocket that hit a house in Ashkelon on Sunday killed a 58-year-old man, police said. He was the first such Israeli civilian fatality since the seven-week Gaza war in 2014.

Another rocket strike killed a factory worker, a hospital official said. The military said a civilian was killed near the border by an anti-tank missile fired at his car from Gaza and a fourth died when a rocket struck the city of Ashdod.

In what it said was a separate, targeted attack, Israel’s military killed Hamed Ahmed Al-Khodary, a Hamas commander. The military said he was responsible for transferring funds from Iran to armed factions in Gaza. Hamas confirmed Khodary had been killed.

The attack on his car was the first such killing by Israel of a top militant since the war five years ago. Israel had suspended what Palestinians call an assassination policy in an attempt to lower tensions.

Hamas leader Ismail Haniyeh issued a statement late on Sunday saying his group was not seeking a broader conflict and held out the possibility of a ceasefire, although sirens warning of rocket fire continued to sound in Israeli cities into the night.

U.S. Vice President Mike Pence reiterated Washington’s support for Israel, saying in a message on Twitter: “We strongly condemn the attacks in Gaza by Hamas terrorists. Israel has the absolute right to defend itself & the U.S. stands by our great ally Israel.”

The sounds of sirens and explosions reverberated on both sides of the frontier on Sunday, fraying nerves and keeping schools closed.

The latest round of violence began two days ago when an Islamic Jihad sniper fired at Israeli troops, wounding two soldiers, according to the Israeli military.

This time, Israeli strategic affairs analysts said, both Islamic Jihad and Hamas militants appeared to believe they had some leverage to press for concessions from Israel, where independence day celebrations begin on Wednesday.

In two weeks, Israel is also hosting the Eurovision Song Contest in Tel Aviv, the target of a Gaza rocket attack in March. That attack caused no damage. On Sunday, sirens sounded in the city of Rehovot, 17 km (11 miles) southeast of Tel Aviv.

Netanyahu, who doubles as defense minister, convened his security Cabinet, which issued a statement saying it had ordered the military “to continue its strikes and to prepare for the next stages”.

For residents in Gaza, the escalation comes a day before the Muslim holy month of Ramadan begins in the territory on Monday. It is traditionally a time for prayer, family feasts to break a daylight fast and shopping.

Among the 14 Gazan civilians killed since Friday were a 14-month-old baby and the baby’s aunt, according to the health ministry. Israel’s military said the intelligence information showed they were killed by a misfired Palestinian rocket.

In Gaza, two Palestinian human rights groups described the cause of their deaths as an explosion with an as yet undetermined source.

U.N. Secretary-General Antonio Guterres condemned the firing of rockets into Israel and urged all parties to “exercise maximum restraint”. A U.N. envoy said it was working with Egypt to try to end the fighting.

Israeli bombings in Gaza destroyed four multi-storey structures. Witnesses said the Israeli military had warned people inside to evacuate the buildings, which it alleged housed Hamas security facilities, before they were hit.

Saeed Al-Nakhala, owner of a clothing store in one of the buildings, said he had no time to save his merchandise.

“I was together with my son in the shop, there was a big noise and then another and people started to run. We left everything behind and escaped,” said Nakhala.

Some 2 million Palestinians live in Gaza, the economy of which has suffered years of Israeli and Egyptian blockades as well as recent foreign aid cuts and sanctions by the Palestinian Authority, Hamas’ West Bank-based rival.

Israel says its blockade is necessary to stop weapons reaching Hamas, with which it has fought three wars since the group seized control of Gaza in 2007, two years after Israel withdrew its settlers and troops from the area.