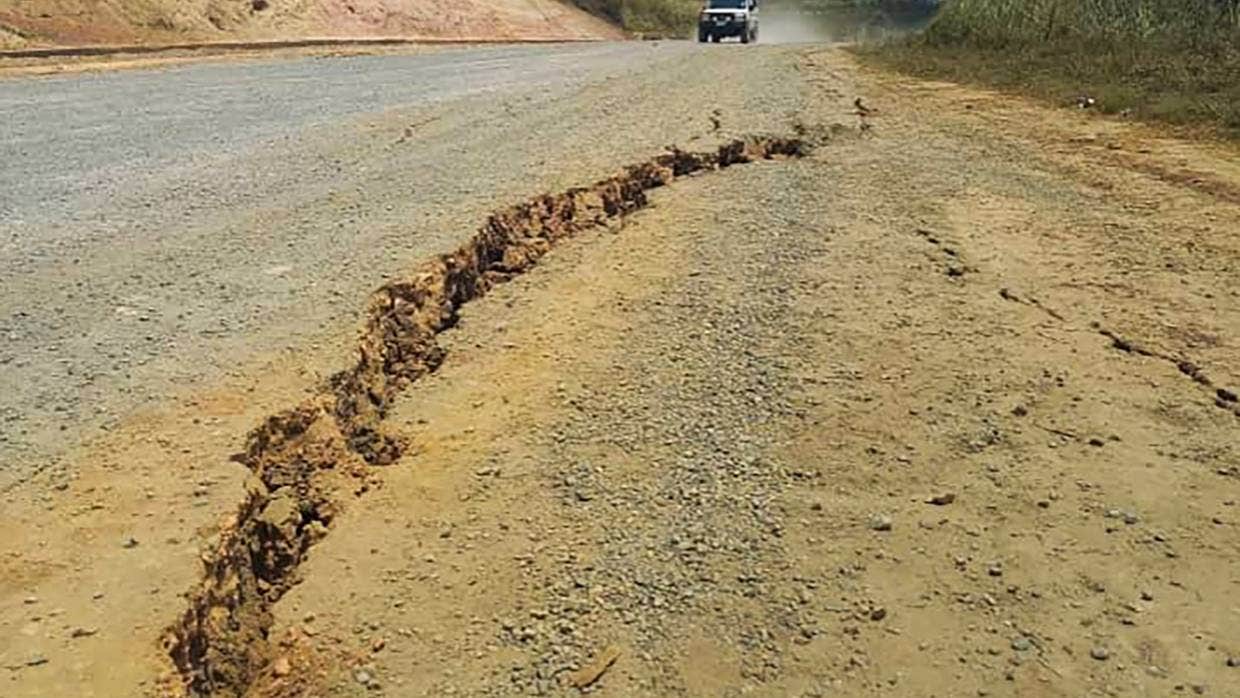 A large crack is seen in a highway near the town of Kainantu, following the 7.6-magnitude earthquake in northeastern Papua New Guinea on Sunday. RENAGI RAVU

At least four people have been reportedly killed after a 7.6 magnitude earthquake struck Papua New Guinea’s eastern region on Sunday.

Local authorities said the death toll is set to rise with some miners still buried in a landslide in Lae Province.

Earthquakes are common in PNG, which sits on the Pacific Ocean’s Ring of Fire, a hotspot for seismic activity due to friction between tectonic plates.

PNG lies about 5000 kilometres from New Zealand, and is one of the most geologically and seismically active areas in the world, geologists say.

It is estimated more than 100 earthquakes of magnitude 5 or greater occur each year in the Pacific nation.

The PNG government said the full extent of the damage was not yet clear.

Prime Minister James Marape said the earthquake was “massive” and he urged his people to be cautious.

“National and provincial disaster agencies, as well as leaders, have been asked to assess the damage and injuries to people and attend to these as soon as possible,” Marape said in his address to the nation.

While the government expects the death toll to rise, Marape said he expected the damage to be less severe than the 2018 earthquake and series of aftershocks, which killed 150 people.

In May 2018, a powerful quake stuck PNG, triggering a tsunami alert for the Pacific nation and nearby Solomon Islands.

Sunday’s quake hit about 67km east of Kainantu and 80km north-west of Lae, but was felt some 500km away in the capital Port Moresby.

Sawang said a landslide had buried homes and “split one village where people lost their houses”.

In nearby Wau, Koranga Alluvial Mining officials announced that three of its miners had been buried alive.

The United Nations Office for the Coordination of Humanitarian Affairs (OCHA) in Asia and the Pacific said that at least four deaths and four injuries were reported to them.

One person died in a landslide in Rai Coast, Madang, with three others buried in Wau, Morobe, the OCHA’s PNG disaster management team tweeted.

“The regional power grid, internet cables, and the regional highway were damaged, but the airport is operational,” OCHA said. “Some of those injured were airlifted for immediate treatment.”

Video of damage to a university in the eastern highland town of Goroka showed large cracks appearing in walls and window awnings.

OCHA said people were injured by falling structures or debris, and there was damage to some health centres, homes, rural roads and highways.

Power infrastructure was damaged in affected areas, causing an outage across the Eastern Highlands, it said.

The US tsunami warning system issued an alert after the quake but later downgraded it once the danger had passed.

The Bureau of Meteorology said there was no immediate threat to PNG’s closest neighbours Australia and the Solomons.