Death toll in South Africa floods and mudslides rises over 70 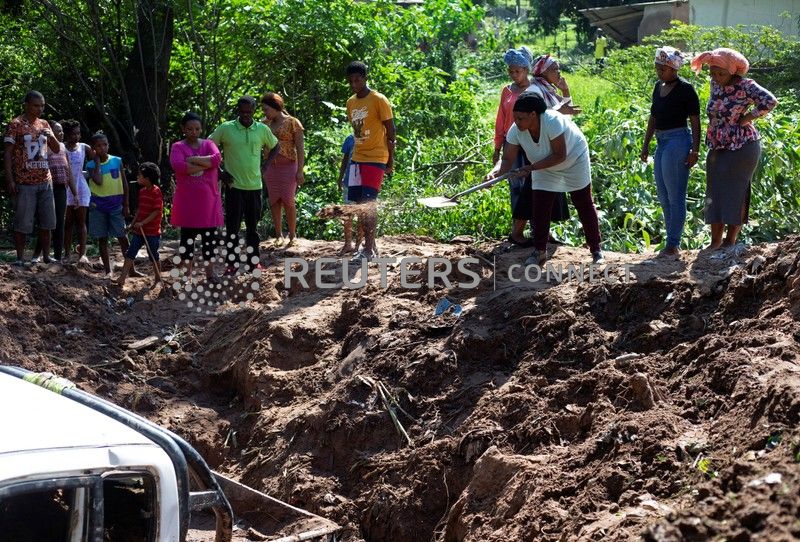 A woman throws soil where the body of a relative was recovered from under the mud after heavy rains caused by flooding in Marianhill near Durban, South Africa, April 25, 2019. REUTERS/Rogan Ward

DURBAN/JOHANNESBURG (Reuters) – More than 70 people have been killed in South Africa after torrential rains along the eastern coast, officials said on Thursday, and rescuers were still recovering bodies.

KwaZulu-Natal province, where most of the deaths occurred after the downpours led to flooding and mudslides, has heavy rain every year, but they rarely kill so many people in such a short space of time.

Some of the worst-hit areas were informal settlements in KwaZulu-Natal, where people live in flimsy houses without proper foundations or drainage systems.

“I don’t recall that in history,” said Lennox Mabaso, a spokesman for KwaZulu-Natal’s cooperative governance department.

A Reuters reporter saw rescuers come to collect the body of a woman who had been dug out of the mud by locals.

The woman had been on her way to work, despite her daughter and grandchild protesting that she should stay indoors, when she and the two children were swept away by floodwaters, her sister told Reuters.

While the children were rescued, they could not find their mother. “It became clear she was dead,” the sister said.

Residents recounted on Wednesday how floodwaters and mudslides crashed through houses, many with people inside, and destroyed roads and other infrastructure.

The rains carved chunks out of hills and roads in the region, with cars, tin roofs and other rubble swept into the deep muddy trenches left behind.

In other places, people buried their dead on muddy hillsides churned up by the storm, marking their resting place with simple wooden crosses.

Over 100 millimetres of rain was recorded as falling at numerous stations within the area between Monday morning and Tuesday, said Vanetia Phakula, a senior forecaster at the South African Weather Service.

Phakula said the high death toll could instead be explained by the flooding and mudslides occurring in more highly populated areas. “Hence the death toll is what it is today,” she said.

While more rain was expected on Thursday it was not expected to be heavy, and the service was forecasting dry weather in most areas by Friday, she added.