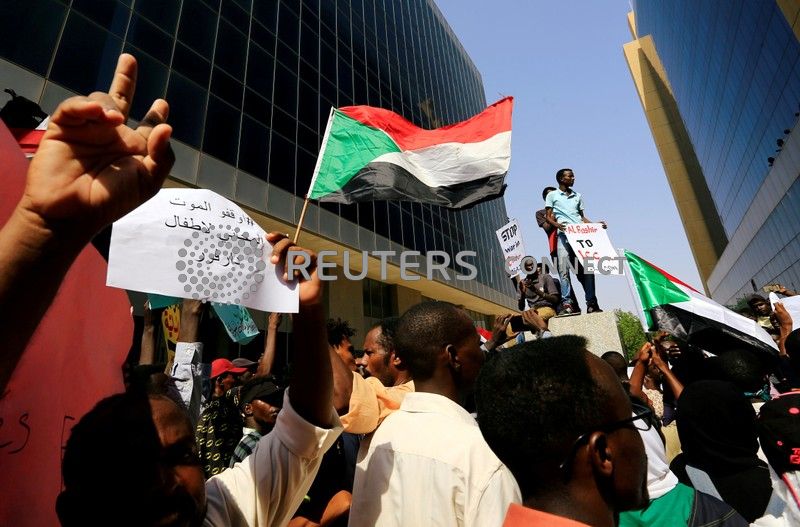 FILE PHOTO: Protesters attend a rally calling for a stop to killing in Darfur and stability for peace, next to a building in front of Ministry of Justice in Khartoum, Sudan September 23, 2019. REUTERS/Mohamed Nureldin Abdallah

CAIRO (Reuters) – The death toll from days of tribal clashes in Sudan’s West Darfur has risen to 56, with 132 wounded, the United Nations and a local doctors committee said on Tuesday.

The bloodshed is the latest in a resurgence of violence in the Darfur region since the signing of a peace agreement late last year and the withdrawal of U.N. peacekeepers.

The government declared a state of emergency in the state on Monday after clashes beginning on Saturday in the state capital El Geneina.

Sudan’s Cabinet said in a statement that the interior minister would be heading to El Geneina soon.

According to U.N. reports, heavy weaponry and rocket-propelled grenades have been used in the violence between members of the Masalit tribe and members of Arab tribes.

One doctor told Reuters he had treated more than 40 people injured on Tuesday, although his hospital had been attacked several times.

“Everybody has a weapon, and if it wasn’t expensive I would get one too,” he added, saying that the situation had worsened on Tuesday.

The General Coordinating Committee for Refugee and Internally Displaced Camps said in a statement that the Abu Zar camp had been burned down.

About 3,800 people have fled their neighbourhoods, some to neighbouring Chad, a U.N. report said.

About 108,000 people had already been displaced from the nearby Kreinding refugee camp into El Geneina following similar clashes in January https://www.reuters.com/article/idUSKBN29N1H5 in which 129 people died.

Brokering lasting peace in Darfur and other parts of Sudan has been one of the main challenges facing the authorities since the overthrow of Omar al-Bashir as president in April 2019.

However, violence there has been on the rise in recent months, despite the signing of a peace deal with some rebel groups that had fought Bashir last year.