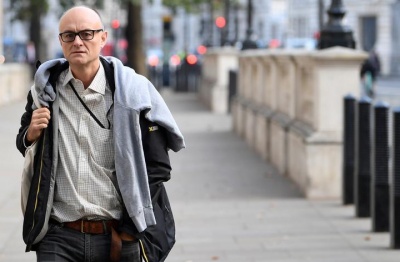 LONDON (Reuters) – Boxed in by parliament, British Prime Minister Boris Johnson’s next move on the Brexit chessboard will most likely be played with the ruthless bravura that his senior adviser, Dominic Cummings, built his reputation on.

Since Johnson won the top job in July, Britain’s Brexit crisis has spun more furiously, leaving investors and allies bewildered by an array of decisions that diplomats compare to the disorientating style of U.S. President Donald Trump.

Johnson said on Tuesday he would not request an extension to Brexit, hours after a law came into force demanding that he delay until 2020 unless he can strike a divorce deal. Before its suspension, parliament refused his demand for a snap election.

Cummings, the puppet master of Brexit who is cast by enemies variously as an anarchist, Britain’s Rasputin or a political vandal, was serene on Tuesday at the center of the Brexit maelstrom.

When asked what his next move would be on Brexit, Cummings told Reuters: “You guys should get outside London and go to talk to people who are not rich ‘remainers’.”

Asked if the United Kingdom would leave on Oct. 31, the 47-year-old Oxford graduate said: “Sure.”

If there is a grand strategy, Johnson’s next move will shape the future of the world’s fifth-largest economy for generations; at stake is the fate of the Brexit endeavor, which both sides cast as the United Kingdom’s most significant decision since World War Two.

But the chessboard has several dimensions: Johnson must factor the absence of any majority in parliament and the electoral threat from the Brexit Party of Nigel Farage, which increases if Brexit is delayed beyond Oct. 31.

Ultimately, Johnson has five choices: strike and ratify a deal with the EU in 50 days; renege on his promises to leave the EU on Oct. 31; somehow get around the law; resign to let another leader request a delay; or an election is triggered.