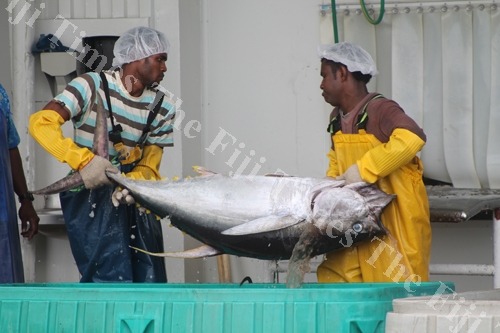 The 2019 deadline approaches for any Pacific WTO member such as Fiji, Solomon Islands and Samoa that are looking to export fish to the European Union. Picture: WWF

THE 2019 deadline is approaching and any Pacific World Trade Organization member such as Fiji, Solomon Islands and Samoa that are looking to export fish to the European Union will need to examine these negotiations carefully to ensure that there is no winding back of benefits, says Adam Wolfenden.

Mr Wolfenden is the trade justice campaigner with the Pacific Network on Globalisation (PANG) and his comments were made during the World Trade Organization Public Forum in Geneva.

PANG claims that the ongoing negotiations on fisheries subsidies at the WTO risk overriding one of the key benefits from a trade deal with the European Union.

Mr Wolfenden told delegates that the negotiations on fisheries subsidies could place additional requirements on canned fish exports from Papua New Guinea and any other country that signed up to an interim Economic Partnership Agreement (iEPAs) with the EU.

“The language being proposed by the European Union as well as other countries like New Zealand will make any new WTO rules apply to fish that lands in Pacific Island member states.

This will undermine the hard negotiated win on global sourcing and make it even harder for Pacific Island Countries such as PNG to benefit from their most valuable natural resources,” Mr Wolfenden said.

In a statement issued by PANG yesterday, Mr Wolfenden said in the interim iEPAs a global sourcing clause applied to canned tuna, allowing Papua New Guinea to source fish from any country, process it domestically and then export to Europe with no import taxes applied to it.

“We are seeing the continuation of trade talks being used by big fishing nations to undermine the control the Pacific has over its fisheries and limit the benefits that can be derived from them for Pacific peoples. “If the talks continue on their current path the outcome will be neither about sustainability nor development,” said Mr Wolfenden.

According to PANG the WTO negotiations on fisheries subsidies are borne out of Sustainable Development Goal 14.6 and aim to eliminate harmful subsidies that contribute to illegal, unreported and unregulated fishing as well as overfishing and over-capacity while also recognising the special and differential needs of developing countries.

“The WTO has a mandate to deal with the issue of subsidies and it must stick to that. It cannot be acceptable to have countries like the EU and New Zealand bringing conservation and management measures into these negotiations. These are sovereign matters for the Pacific and they will continue to manage their resources,” said Mr Wolfenden.

PANG will be joined on the panel by Dr Radika Kumar from the University of the South Pacific as well as experts from the South Centre and the Centre for WTO Studies.