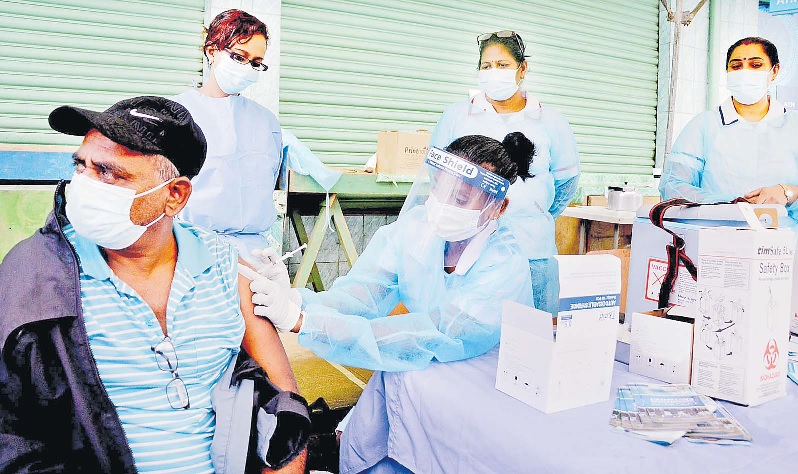 Narere resident receives his COVID-19 jab by staff nurse Rupa Nair while her fellow front liners look on during the vaccination drive in the area. Picture: ATU RASEA

It was only in March that Fiji was boasting about its worldbeating status at eliminating the coronavirus.

Three months on, we are a different kind of world-beater.

Last week, we recorded the fastest growth rate of COVID-19 infections in the world.

The daily increases are now being measured in three-digit numbers, released in the dead of night (although now the Government says it will tell us in daylight).

We know it and the Government knows it – the virus is not “under control”.

It is not confined to “clusters”.

Every day, the Ministry of Health begins the work of chasing down ever-bigger numbers of cases with unknown sources.

The man our politicians leave to deliver the bad news – permanent secretary of Health Dr James Fong – has said (rather starkly) that he is “confident” that the 100-plus daily totals we are now recording “will increase”.

What internal conflicts does Dr Fong face every day?

He is a senior public servant, bidden to do as the Government instructs him.

But as the most senior public servant responsible for health, surely he should also expect the Government which instructs him to listen to his advice.

And there are many, many doubts about that.

How have we managed to go from zero to more than 1000 active cases in less than two months?

The answer is because of a spectacularly inept performance by those who are apparently in charge – our Government leaders.

They don’t look like they are taking any sensible advice.

They refuse to work with the organisations who are already supporting the most vulnerable.

They refuse to accept that, in a politically polarised country, a unified message from politicians is essential and they must work with their opponents.

Dr Fong read out a speech the other night saying Opposition politicians should not criticise the Government as having no plan.

But Opposition politicians are not in the loop.

They haven’t been told “the plan”.

They are as blind to “the plan” as the rest of us.

The Government’s communications strategy is chaotic.

Leaders’ speeches, virus data, the information people need to make decisions – all appear after dark, usually between 10pm and midnight.

The Government can never set a time to talk to us and stick to it.

It’s not enough to say “our mitigation strategy is our plan”.

What we want to hear is – how many cases are you planning for now?

How long do you think it will be before things improve?”

And how will you stage your response in line with that?

Vaccination is clearly part of the plan.

MOH is going all out to get people jabbed.

And it appears to be doing a reasonable job.

But – let’s look, again, at the realities.

The first part of the vaccination program is the easy part.

That’s when the people who want the jab, who understand its importance, who can travel to a nearby vaccination station – all get done.

You could call us (as they say) the “low hanging fruit”.

Then it gets harder.

Some people are fearful.

Some people are poorly informed.

People, particularly in rural areas, may be too far away, too infirm, too busy to get to a vaccination station.

So we are many months away from 80 per cent.

And what will the virus be doing in the meantime?

So, you might ask, what is the point of criticising now?

The damage is done – “let’s all look for solutions”.

But to find solutions you first have to understand the problem.

There is no point rushing out to solve a problem if its fundamental causes are unchanged.

All over the world there has been only one serious solution to the out-of-control spread of the coronavirus – elimination, by lockdown.

So let’s first understand what is normally meant by a “lockdown”.

It is not a curfew.

It is a total restriction on people’s movements from home, with exceptions – usually one person at a time – to buy food, to seek medical help or, in some cases, to exercise.

That is based on the notion that we all remember Dr James Fong telling us, simply and clearly: “If you move, the virus moves”.

That was just before the Government’s first inexplicable blunder – opening up the borders on containment zones in Suva, Lami, Nasinu, Nadi and Lautoka.

Why do we need lockdowns?

Because, no matter how hard you try to urge people to physically distance, wear their masks, wash their hands, and all the rest, not everyone will do it.

Fiji people are criticised for not following the rules.

Which is convenient, because of course it means that Government can tell them: “It’s your fault the virus is spreading”.

But Fiji people are no different to people anywhere else.

They are just as forgetful, just as uncomprehending – and sometimes just as plain rebellious – as everywhere else in the world.

If people in Australia, New Zealand or the UK all followed the rules, there wouldn’t need to be “locked down”.

But they have been – in many cases, for weeks at a time.

Lockdowns and the poor

The Government’s virus planning – or lack of it – all seems to start with the idea, propounded by Attorney-General Aiyaz Sayed-Khaiyum, that “no developing country has ever succeeded in running a lockdown”.

There’s only one problem with that idea.

What are you going to do instead?

There are plenty of things developing countries in the last 50 years have not succeeded in doing.

But we still try.

Next comes the notion that “poor people can’t afford a lockdown”.

There is a cruel illusion in this statement.

It hides a different reality – poor people can’t afford anything.

Whatever option is taken, the poor will be hit the hardest.

What the Government is really saying is: “We can’t afford a lockdown”.

And even that is not so.

The Government is not prepared to swallow its pride and ask for help.

It is not prepared to get into a room with the people who have been supporting the poorest in our community for a year already.

Or with its own welfare officials, and others like the business community, with the skills and resources to help.

The Government is not prepared to map out a plan to support the most vulnerable, and make it work.

Lockdowns take time to work out and pull together properly, with everyone involved.

We apparently aren’t even thinking about the possibility – so we are losing even more time.

Will it be a perfect plan?

Does it guarantee that every poor family will get three meals a day or all their needs will be met during a lockdown?

But look around you.

In Fiji, that is already so.

And when, as we drift around in health and economic limbo, how will things get any better?

And so I return to the first point – what is the alternative?

It seems to be: “Let people go to work and wander around so they can earn money to buy food and tell them all to wear their masks”.

But what is the reality?

In the current economy, thousands are on half-wages, half jobs or no jobs and no income, with employers who are not allowed to open their doors anyway.

The rest would be more useful to Fiji locked down and not moving.

And the plan ignores what the world is learning about the corona virus, including Fiji’s 60 per cent-more-infectious Delta variant.

Not only does the virus kill, say, 2 per cent of those people infected – it also results in long-term damage to the health of many people who survive it.

If the virus begins raging, India-like, in our community, the rich will lock themselves into their homes with their food supplies and their Netflix subscriptions.

Where will the poor go?

Who will employ them?

How will they get treatment in a health system that is overwhelmed?

And as the numbers increase, so do the risks to our health workers – no matter how careful they are and how many precautions they take.

There’s nothing they can do about it – it’s just maths at work.

Let’s try to summarise where we are.

Apparently we are not going to lock down.

We are just going to continue to drift along in some sort of “mitigation” limbo watching our coronavirus numbers go up and waiting for them to come down.

We are apparently going to race the virus with a vaccination campaign – even though the virus is on its “last lap” bell to victory and the jabs haven’t even made it once round the track.

And, as our case numbers increase, that little number – that death rate of 2 per cent – starts to look a little more ugly.

How high will this number go?

If we can’t – or won’t – lock down the country to fight back the numbers quickly, there is an obvious, tragic consequence – loss of life, and serious health problems for possibly thousands into the future.

So how many lives are we prepared to lose?