Day after Mexico mine collapse, families fret over 10 trapped miners 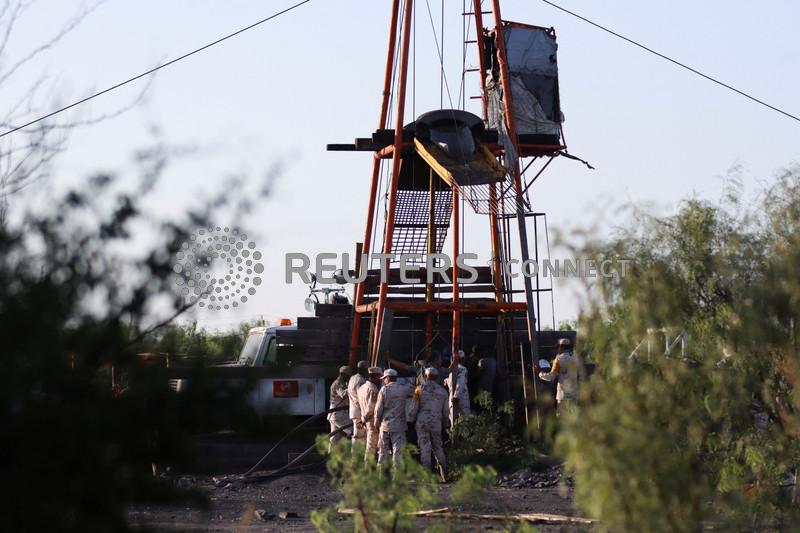 Soldiers stand next to the mine shaft of a coal mine that collapsed leaving miners trapped, in Sabinas, in Coahuila state, Mexico, August 4, 2022. REUTERS/Antonio Ojeda

MEXICO CITY (Reuters) -Families grew increasingly anxious on Thursday as they awaited word from rescue teams tasked with descending a flooded coal mine in northern Mexico to rescue 10 workers nearly 24 hours after an accident confined the crew deep underground.

The miners https://www.reuters.com/world/americas/nine-miners-likely-trapped-after-collapse-mexican-mine-says-president-2022-08-03 became trapped on Wednesday after their excavation work caused a tunnel wall to collapse, triggering flooding in three wells.

Erika Escobedo, the wife of one of the trapped miners, 29-year-old Hugo Tijerina, told Reuters she spent all night watching rescue efforts at the site in the northern border state of Coahuila.

“They say the water is rising,” she said, describing bigger water extraction pumps she saw hauled to the site.

Mexico’s Civil Protection agency did not immediately respond when asked about efforts to pump out the water, and if levels were rising.

Its director, Laura Velazquez, said earlier on Thursday that time was everything, and several hundred officials were “working day and night” to assist with the rescue.

Six divers from the Mexican Special Forces arrived at the site on Thursday morning to help the rescue effort along with search dogs, according to Agustin Radilla, a top military official. The mine’s wells, each 60 meters deep, were more than half flooded, Radilla added.

“I want my husband to come out all right,” said Escobedo, her voice breaking in a phone interview from the site, as she watched rescuers bore another tunnel to try to reach the miners.

For now, she has told her three children not to worry about their father and that he will come home okay.

Five other miners escaped the accident. They all received medical treatment, and two have been discharged from hospital.

President Andres Manuel Lopez Obrador said investigations into those responsible for the mine’s safety will come only after the rescue effort.

“With all my soul, I want us to rescue the miners,” he said at a news conference. The mine opened in January and had no “record of complaints for any type of abnormality,” the Labor Ministry reported yesterday.

Still Elizabeth Vielma, the mother of three men who work at the site but were not involved in Wednesday’s accident, said she worried about conditions there.

“They just give them the drills and send them down,” she said.