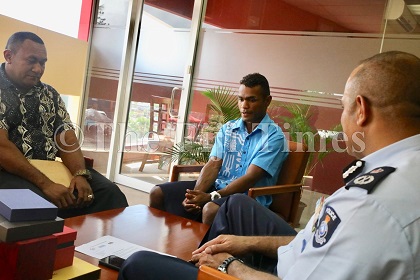 FIJI Police officer and national boxing rep, Jone Koroilagilagi Davule hopes to take his personal sporting achievements up a notch when he competes at the 2020 Boxing Qualification Tournament next week.

PC Davule was farewlled today by the head of the Fiji Police Force as he prepares to depart our shores for the 2020 Olympics qualification tournament scheduled to be held in Amman, Jordan from March 3-11, 2020.

The 24-year-old from Natauloa, Nairai, Lomaiviti said he is always proud to represent the nation and the Fiji Police Force whenever he competes.

“When I was in Australia recently, I was always asked as to why I was wearing the Police logo and my response is because I am a proud police officer,” PC Davule said.

“The Commissioner’s parting words have really motivated me in my goal to become and Olympian and with his support and the support of my comrades I want to make them all proud by qualifying for the 2020 Olympic Games,” he said.

The Nadi based Police Officer has represented Fiji at the Commonwealth Games, Pacific Mini-Games in Vanuatu in 2017 where he won a bronze medal and was a silver medalist at the 2019 South Pacific Games.

Commissioner of Police Brigadier-General Sitiveni Qiliho said the support of the entire institution was behind the young boxer.

“I’ve followed his progress closely over the years because he has always been a quiet and humble achiever, so the news of his selection as one of Fiji’s Boxing Representative to the 2020 Olympic Qualification Tournament came as no surprise to me”.

He was accompanied by Assistant Coach PC Viliame Vutikalulu this morning and flies out with fellow boxer Winston Hill tomorrow morning.

COVID-19: WHO – No new countries report new cases in past 24 hours