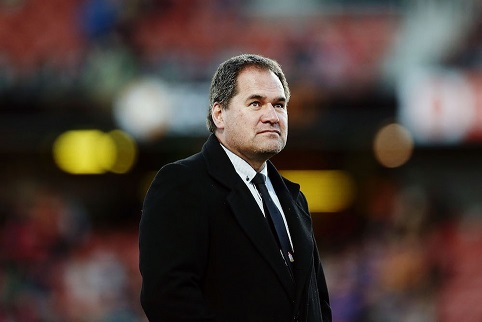 SYDNEY, 03 AUGUST 2020 (SMH)—Wallabies coach Dave Rennie has sounded a cautionary note on the future of teen sensation Joseph Suaalii, warning both rugby codes that signing a 16-year-old is a promise to look after him.

Rugby Australia and South Sydney are still awaiting Suaalii’s decision on whether he will take a four-year, $2 million offer to play in the NRL, or a $230,000 offer to play Super Rugby and go to the Olympics next year.

Rennie has had no contact with the teenager and his family since January, when he visited the Suaalii’s Glenmore Park home with director of rugby Scott Johnson.

But the Wallabies coach has decades of experience nurturing young players as a three-time World Championship-winning coach of the New Zealand U20s and six years in charge of the Chiefs.

He said signing players straight out of high school amounted to a promise to their families to put their children first.

“When I was at the Chiefs and we brought young kids to Hamilton, some of them were 18-year-olds leaving school who were going to come to Waikato but be under our umbrella,” Rennie said.

“You’re basically promising their parents that you’re going to look after them.”

Suaalii is in Year 11 at The King’s School and has been balancing school with playing rugby league for the Rabbitohs in the SG Ball U18s competition and rugby for the Australian Schools and U18s, as well as all his GPS sporting commitments.

Rennie said he was struck by the care taken by Suaalii’s parents, Chris and Salina, in helping their eldest son make a decision about which sport he would concentrate on.

“He’s an impressive young man and I was impressed with his parents, certainly mum talked a lot about wanting what’s best for him and it wasn’t about money,” Rennie said.

“They’re quite different situations from a decision point of view for him. Financially we’re poles apart, so really what’s important for us is to be in the conversation.

“You just want people making informed decisions. That’s key. It’s easy to be on one side of the argument and try to convince people to select you guys because of this or because of that.

“But you put your best foot forward, you talk about what’s great in the game and the support you’re going to give them.

“We’re going to lose a lot of those battles financially but we are going to keep some kids. Because our emphasis is not just on the finance it’s on the whole person.”

The Suaalii wait-and-see was interrupted for rugby fans on Saturday when another superstar in the making, Jordan Petaia, made his return to play for the Reds.

Petaia was a similarly prodigious schoolboy and became Australia’s youngest ever Super Rugby debutant when he came off the bench for Queensland against the Brumbies two years ago, at the age of 18 years and 24 days.

Foot, hamstring and shoulder injuries have hampered his first two years as a professional but the 20-year-old did not appear out of his depth during his Test debut at last year’s Rugby World Cup.

After a game-altering return in Canberra last night, which included a disallowed try, 63 run metres from eight carries and a haircut befitting his status as Australian rugby’s next big thing, it would not surprise if Petaia made the Wallabies coaches’ weekly first XV.

“I thought it was a pretty impressive return. He’s played barely any rugby in the last two years,” Rennie said.

“I know he’s worked really hard, [Reds strength and conditioning coach Damian Marsh] has done a great job whipping him into shape. There’s been a lot of effort go into that and Jordan’s been great.

“It was exciting to see him back out on the field and enjoying it, he certainly had a presence.”

Petaia was one of the first players signed to long-term deals by Rugby Australia, agreeing to a five-year deal that put him front and centre of what Johnson believes is the code’s future.

The outside centre is reportedly being chased by NRL clubs to make a code switch. Again, Rennie’s experience recruiting and developing New Zealand’s best could play in rugby’s favour.

“I think what we did well [at the Chiefs] was we didn’t try to bring 10 kids in the same position to our region,” he said.

“We tried to find the best kids in the country and then put our eggs in one basket, which forced us to develop them quickly, accelerate their learning and hopefully [they] come through the system quickly. That’s key.”